Five Things to Watch For Against The Bills 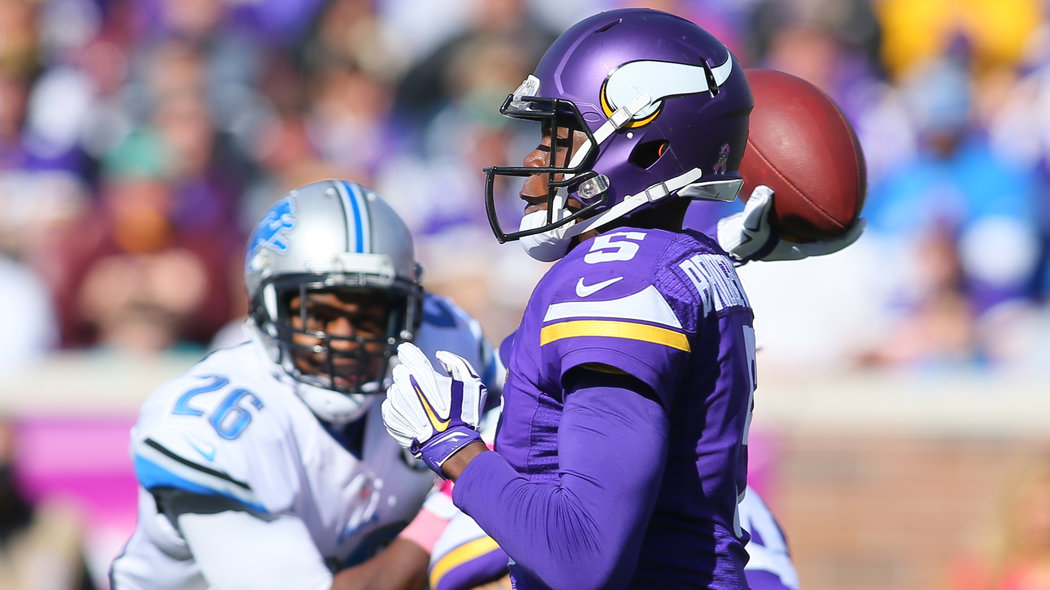 The Minnesota Vikings are looking to rebound as they travel to Ralph Wilson Stadium for an AFC matchup with the Buffalo Bills.


The Vikings offense couldn't move the ball and following an anemic performance against Detroit, they will look to rebound as they square off with the Buffalo Bills. Minnesota failed to protect quarterback Teddy Bridgewater and he was sacked eight times last week. They will be challenged this week, as Buffalo is ranked third in total sacks (19) this season. Buffalo has accumulated eight sacks over the last two games and notched six sacks against Detroit two weeks ago. Both teams are looking to bounce back after home losses to division opponents last week.

The Bills lost 37-22 to the Patriots, but were able to keep pace with New England for the majority of the game. Two weeks ago, Buffalo turned to veteran Kyle Orton at quarterback. He knocked off the Lions in his first start and displayed average numbers against New England. Orton needs to be pressured and when he has time to make decisions, he is far more effective. In a week five win against the Lions, he was sacked just two times. In contrast, he was brought down five times in last week's loss.

As for the Vikings, their defense has played well enough to win during moments of the season and now the reliance has been placed on the offense to execute the gameplan.

The Vikings entire offensive line has been a dumpster fire and at this point, that statement would be an insult to all trash collectors. Each and every player has contributed to this massacre and it is time to sort these issues out. They aren't getting off the ball quick enough and they haven't created any form of solid initiation at the line of scrimmage. Teddy Bridgewater was sacked eight times last week and about five of these sacks were related to poor offensive line play. They don't have much time to sort theses issues out and will be tested by a quietly improved Bills defensive line. Buffalo is ranked third in sacks and they lead the league against the run. Mario Williams and Marcell Dareus are both leading the group and none of the Buffalo Bills defensive lineman ranked negatively last week. They get to square off with an offensive that is in ruins at this point. This week, Mike Zimmer spent plenty of time with the offensive line during practice and he knows they hold the keys to the success of the Vikings offense.

Set the tempo on offense

The Vikings offense isn't built to play from behind and they must dictate the tempo of this game early in the contest. Teddy Bridgewater needs to get into a rhythm by completing short and intermediate passing, while moving the chains. By getting in a groove and sustaining drives, the rhythm can be developed and the defense can stay off the field. Time of possession is critical and over the last two games, a heavy strain has been placed on the defense. If the offense can score early, stay on the field, and more importantly, be balanced, the Vikings will have a chance to knock off the Bills. If they can't, the result will be similar to the performance over the last two weeks.

The Vikings running attack has been inconsistent at times and they have been unable to find a playmaker that can constantly perform at a high level. Jerick McKinnon played well last week and has really established himself as a pass catcher out of the backfield. He is a great change of pace back, but at the moment, he can't provide the intensity needed in a dynamic starting running back. Matt Asiata saw a diminished role in last week's gameplan, but Norv Turner insisted he will see more work this week. He is a road grader and can provide more on the goal line and as a third-down pass protector. Jerick McKinnon needs more experience and in order to become more dynamic, he simply needs to see an extended amount of action at the pace of the NFL. Tomorrow won't be an easy task for the Vikings running backs, especially against the top run defense in the league. The Bills are allowing just 67.5 yards per game and haven't surrendered a run over 16 yards this season. If the Vikings can't gain short yardage to help move the chains, the offensive will again perform in an unbalanced way.

Kyle Orton replaced E.J. Manuel two weeks ago and is playing admirably as he continues his 'journeyman' style career. He has thrown for 300 yards in each of his first two games and has added a trio of touchdowns. He has made his share of mistakes, accumulating a pair of interceptions in his last two contests. Orton is successful when he has time in the pocket to step up and go through all of his reads up the field. He likes to complete short and intermediate patterns up the field in the variety of check downs and dump-offs. Orton looks for Sammy Watkins to extend the ball up the field and likes to find running back Fred Jackson on short dumps out of the backfield. Orton needs to be pressured and when he has time to make decisions, he is far more effective. In a week five win against the Lions, he was sacked just two times. In contrast, he was brought down five times in last week's loss. Everson Griffen and Brian Robison need to provide edge pressure and the interior needs to maintain leverage. If the defensive line can place Kyle Orton in situations where he needs to make quick decisions, the secondary will be provided with opportunities to create turnovers.

Keep an eye on the running backs

The Bills love to incorporate their running backs into the passing game, specifically with Fred Jackson. He has hauled in 50+ yards receiving in three of his last four contests and has notched a touchdown. Jackson is averaging roughly five receptions per game and is providing a huge output for the Buffalo passing game. C.J. Spiller is one of their feature running backs and has exceeded over 100 yards on the ground this season. The Buffalo running game isn't explosive, but they need to be defended hard in the passing game. In certain packages, Anthony Barr will be isolated with these running backs in space. He has been extremely solid in these situations, but Chad Greenway could return tomorrow and he will be required to handle some of these check downs. The defense needs to make these tackles immediately and can't allow the Bills to accumulate heavy yardage on these types of plays.