The Minnesota Vikings knocked off the St. Louis Rams 34-6 on Sunday and began the season with a road win. What went behind the win and what stood out on film? Daniel House takes a closer look in this film review session.


*Note: To see the play images bigger, simply click on them*

The Vikings lined up in plenty of formations on Sunday, but several made a significant impact on the game. First we'll start with the jet sweep formation. Vikings offensive coordinator Norv Turner has been searching for ways to utilize the skill-set of Cordarrelle Patterson and he ran this play on multiple occasions against the Rams. 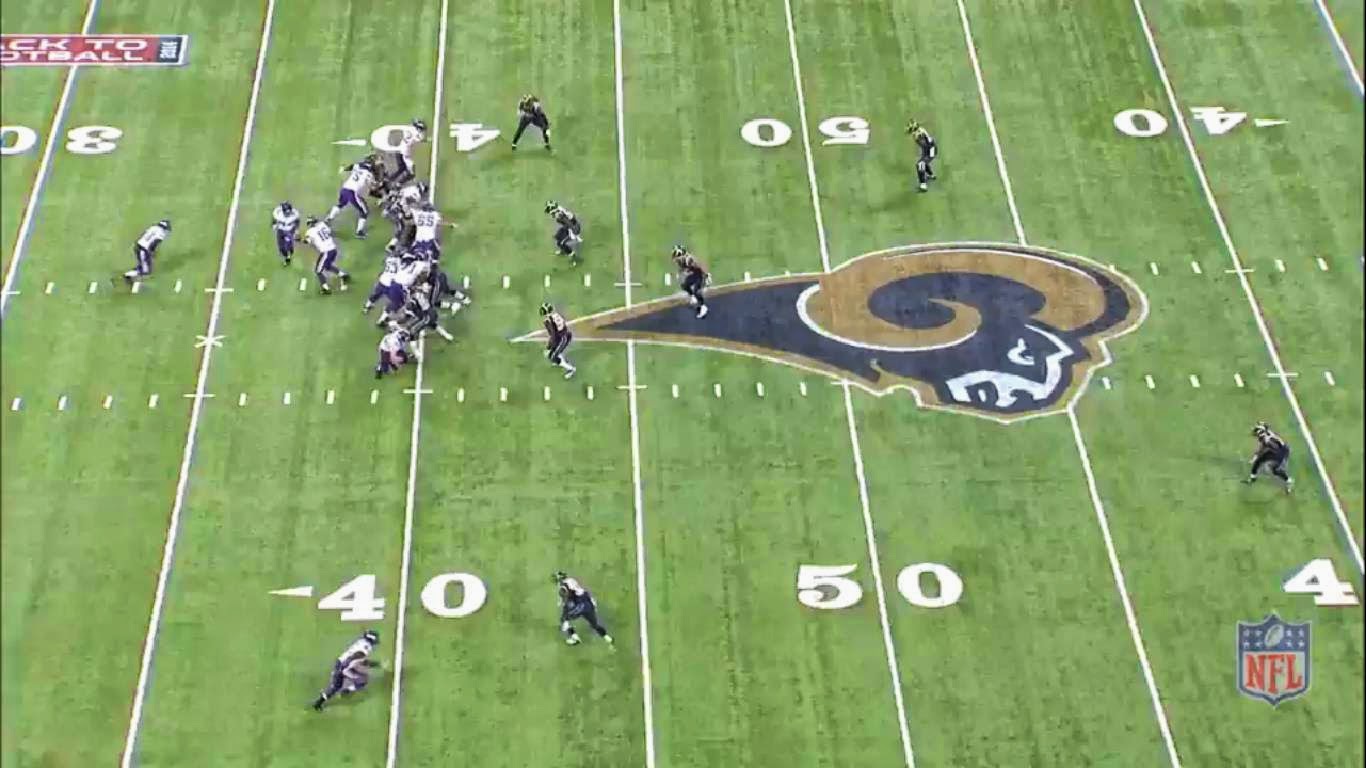 In this example, Patterson runs for a first down and is aided by a beautiful block on the corner by Rhett Ellison. This was the case on several occasions and Ellison rated with an offensive high +3.5 in Pro Football Focus. This play sets up in motion and the outside linebackers bite hard towards Adrian Peterson. Ellison is able to block the approaching outside linebacker and Patterson is able to shake through the hole. He takes on the approaching cornerback, fends off the tackle, and the safety swiftly makes the tackle. This play was ran on multiple occasions and yielded positive yardage on every occasion. Jet sweep plays are becoming a phenomenon in the NFL to garner specifically to the skill sets of athletic wide receivers. Percy Harvin has ran the play frequently in Seattle and Turner wants to keep the defense on edge, while potentially decoying opposing defenders into a bad situation.

Early in the game there appeared to be some miscommunication between the coaches and the players on the field. In this instance, Charlie Johnson was blown off the ball by Robert Quinn.

This could have been an issue regarding what protection was called and Johnson clearly was confused about the happenings as the team walked up to the line of scrimmage. This play was blown up and resulted in a throwaway on third down. The offensive line struggled in the first half, but settled in during the third quarter of the game.

I also noticed a missed holding call during an 8-yard touchdown pass from Matt Cassel to Greg Jennings. Kalil clearly was struggling and reverted to grabbing high onto the defensive end's jersey. He didn't engage and get low at the line of scrimmage. Pad level has been an issue with Kalil in the past, but he has slowly improved in this avenue. The offensive line didn't play well in pass protection at times, but they paved the way in the run game on a frequent basis.

This play features a look where John Sullivan pulls to the outside and makes a block for Adrian Peterson.

This is a blocking scheme implemented with the new coaching staff entering the fold. Brandon Fusco and John Sullivan are pulling to the outside and are finding defenders in the second level. These type of runs are allowing Adrian Peterson to run towards the sidelines and less between the guard and tackle. It works well to utilize his skill-set and diminish the amount of hits he is taking when he pounds the ball hard at the line of scrimmage.

The biggest excitement was to see how the Vikings would line up on defense in certain packages. Mike Zimmer failed to disappoint and provided some exotic packages that really caused fits for the Rams offense in third-and-long situations. Let's take a look at the 'Nascar' package. 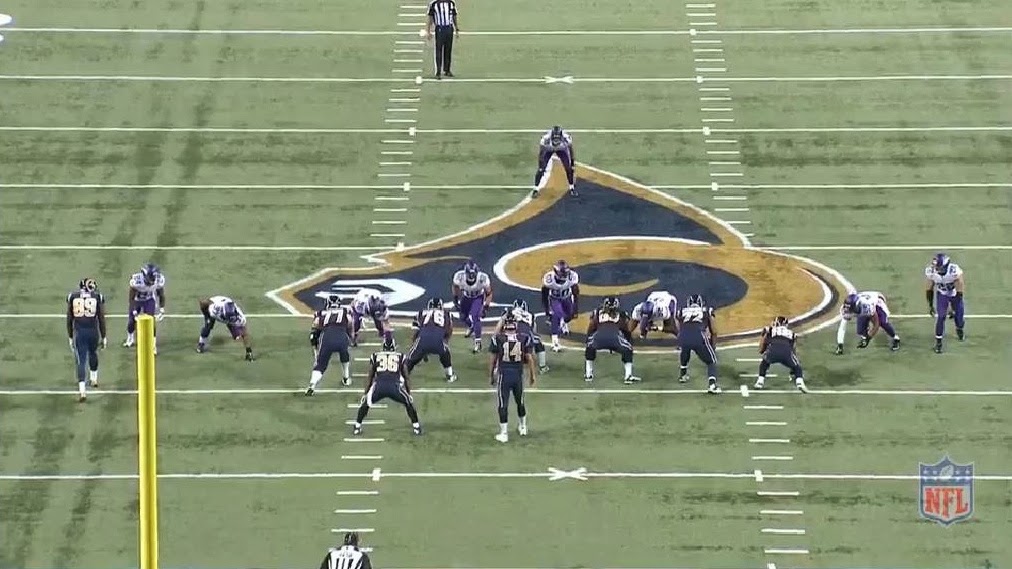 In this set, you can see linebacker Gerald Hodges and Chad Greenway are lined up in the A and B gaps getting ready to blitz hard. On plenty of occasions they weren't blitzing hard and were performing a disguise that is referred to as 'sugaring the A gap.' If you want to see a remarkably detailed synopsis of how this occurs and the logic behind it, read this brilliant post by Arif Hasan. The real question is: when is Arif going to get hired to be a scout or film analyst of an NFL squad? Nonetheless, Anthony Barr is lined up at defensive end, which provides the chance for linebacker Gerald Hodges to enter the game in the nickel package. Hodges played very well in this game and made some athletic tackles in space. Barr continues to show strides in coverage and shut the door on two screen passes in their early stages. The learning curve doesn't appear to be too steep for Barr and the parabola is starting to stretch to infinite y-values for the rookie linebacker. Furthermore, Harrison Smith is placed on the edge and blitzes hard in the alley. He reaches quarterback Shaun Hill and forces a quarterback hurry. The Vikings were running plenty of looks where the safety blitzed and Smith added a sack later in the game.

Many people were wondering why Everson Griffen was given such a low rating after notching back-to-back sacks in the 4th quarter of this game. His deficiencies came in run defense, according to Pro Football Focus. This play perfectly provides an illustration of one play that Griffen was beaten. 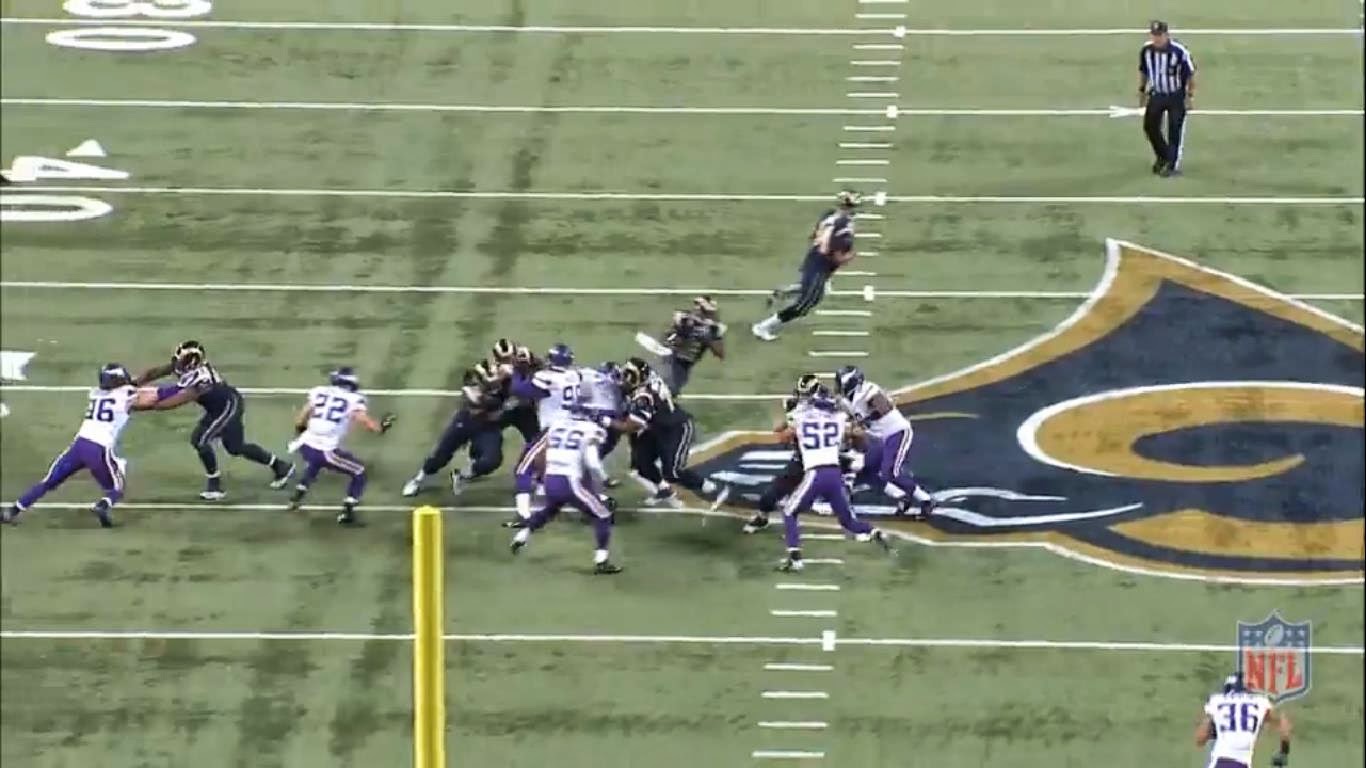 If you look specially on the right edge of this play, you will see Griffen is sucked into the middle and Tavon Austin quickly burst past him after he was cut out by the offensive tackle. Griffen instinctively tried to get up in a swift manner, but safety Robert Blanton was forced to make the tackle in space. There weren't any other situations I witnessed where Griffen exhibited any issues as a run defender, except on two occasions where he couldn't make stops between the offensive tackles.

Finally, in this play, the Vikings defense is playing a bit of an exotic look with their safeties.

Safety Harrison Smith begins to line up like he is going to rush off the edge and Barr stands up in the nine-technique, but quickly lines up at defensive end. Smith waits until the snap of the ball and backs into coverage, while Robert Blanton sits into the deep zone. This is the same 'Nascar' package I discussed above, but the safeties back off at the last moment.

As a whole, the defense is playing with some more disguises and are blitzing while creating pressures on third down. On the offensive side of the ball, the goal is to get the playmakers in the offense out in space, which in turn provides plenty of explosive action and scoring opportunities.