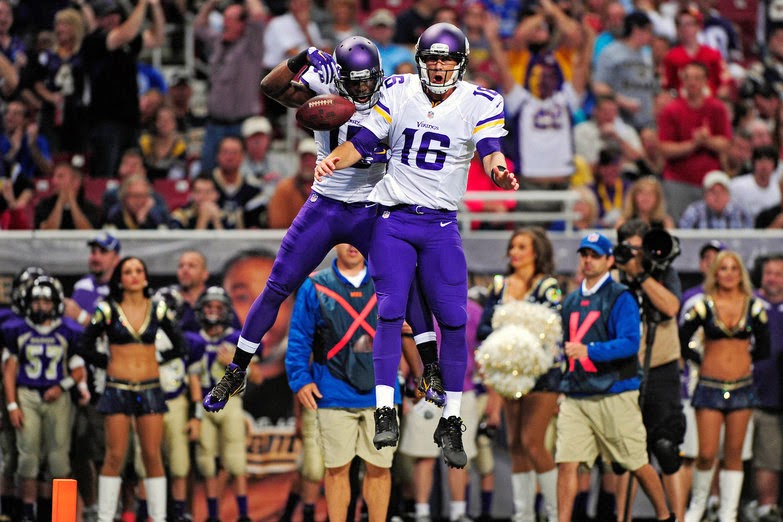 A solid performance by the defense and a balanced offensive attacked helped the Vikings open the season with a convincing 34-6 win over the St. Louis Rams.


The Minnesota Vikings opened the season with a convincing 34-6 win on the road against the St. Louis Rams. Wide receiver Cordarrelle Patterson ran for 102 yards on three carries, including a 67-yard touchdown run off of a pitch out of the backfield. The Vikings defense shut down the Rams offensive attack, helping Mike Zimmer pick up his first win as an NFL head coach. The Rams were able to handle running back Adrian Peterson, allowing him to rush for just 75 yards on 21 carries. They couldn't handle Cordarrelle Patterson out of the backfield and it proved deadly on multiple occasions in today's game. The Vikings defense surrendered just 72 rushing yards and prevented the St. Louis offense from reaching the end zone. Safety Harrison Smith added a 83-yard interception return touchdown later in the 4th quarter, capping the Vikings 34-6 win. Most importantly, the team won their first game on the road since the end of the 2012 season.

I compiled all of my notes from the Vikings win over St. Louis and allow you to take a glance inside of my notebook.

Matt Cassel didn't play at an elite level by any stretch of the imagination, but he managed the game and didn't make any critical mistakes. That is all he needs to do for this team to be successful and today was the perfect example. There were several communication issues between the coaches and Cassel early in the game, but these problems were slowly resolved as the game progressed. Cassel finished the day 17-for-25 with 170 yards passing and two touchdowns. He connected with Greg Jennings and Kyle Rudolph for scores and continually spread the ball around the entire game. Cassel connected with seven different receivers and most importantly, didn't make mistakes that have plagued this team in the past. If Matt Cassel can manage the game, make the throws when necessary, and continue to play mistake free, the Vikings can be a formidable offense in this league.

Adrian Peterson wasn't asked to pound the ball nearly as much, but when he did so, he ran with more patience. You could see more vision from Peterson and it paid off during certain stretches of the game. Peterson rushed for just 75 yards on 21 carries, but he added two catches for 18 yards receiving out of the backfield. He played a pivotal role in setting up an 8-yard touchdowns strike to Greg Jennings near the end of the first half. The previous play, Peterson hauled in a pass reception off of a arrow route exploiting the Mike linebacker who was caught sleeping. These are the types of things Peterson has never been asked to do in his career, but his athleticism is being garnered to open up opportunities for other players to be successful.

The Vikings signed Greg Jennings to be a leader and playmaker of the team last season, but due to poor utilization and quarterback play, he was a disappointment. Matt Cassel continually targeted Jennings during his time in the games last season and did so again today. Jennings hauled in a beautiful tip-toe touchdown catch near the end of the first half and added two huge first down receptions. He seems very comfortable in this offensive system and he has been able to flourish by displaying his superior route running abilities. Pair his talents with the likes of Cordarrelle Patterson, Jarius Wright, and Kyle Rudolph and the ball can be equally distributed to multiple locations on the field.

Kyle Rudolph was rather nondescript during the early portion of today's game, but once the Vikings reached the red zone, Matt Cassel connected with the tight end for a 7-yard touchdown strike. Rudolph registered just two catches during today's game, but the ball was distributed to him in a timely manner. The Vikings weren't in the red zone on a frequent basis during today's game and with poor field position for the majority of the contest, Rudolph was targeted on a limited basis. Rhett Ellison also notched a critical 22-yard reception that set up the touchdown for Kyle Rudolph.

Offensive line shaky, but settles down

The offensive line was very shaky in the first half of the game and miscommunications led to several false start penalties. Charlie Johnson was destroyed on a pass rush by Robert Quinn, which led to a Matt Cassel throwaway. Matt Kalil picked up two false start penalties and Phil Loadholt was beaten on a run play. By the time the second half rolled around, the communication issues appeared to improve the offensive line play. They played a pivotal role in the 67-yard touchdown run by Cordarrelle Patterson and opened a hole that a John Deere tractor could have drove through. They didn't play at an elite level and certainly didn't meet standards in the first half, but after settling in during the second half, you can have a little more confidence in this group.

The defense was pressuring hard on a frequent basis during today's game. Anthony Barr was playing defensive end in nickel situations and was getting to the quarterback frequently. More importantly, the interior of the defensive line was dominating during certain stretches of the game. Sharrif Floyd beat a fullback and guard to obliterate Tavon Austin in the backfield. Linval Joseph added a sack late in the game and his presence was felt immediately in run defense. Everson Griffen added back-to-back sacks in the fourth quarter and the Vikings notched a total of five sacks on the day. The Minnesota defense flourished in third-and-long situations and applied blitzes and pressures on a frequent basis. These sacks and pressures led to big plays in the secondary and in turn shifted momentum and field position into the Vikings' favor.

Anthony Barr may not have blown up his stat sheet with sacks, but his abilities in coverage and run support were far ahead of the expectation. Barr shut the door on two screen passes and was in the backfield actively shutting down runs to the outside. He and Robert Blanton led the team with seven tackles during today's game. Barr was used in a variety of different sub-packages and was lined up at the defensive end position during many of the nickel situations today. This opened the door to insert Gerald Hodges into the nickel rotation at linebacker. Hodges can provide athleticism and reliable tackling abilities in nickel situations. The rotation can help keep linebackers legs fresh and in turn create more opportunities to be successful as a defense.

Captain Munnerlyn was signed to make an impact in coverage and run support at the cornerback position. Today, he did just that and continually was making tackles on runs that were stretched to the outside. He was able to stay home and understand the formation and type of play the Rams were about to run. His presence was felt in the run game and he played a pivotal role in allowing the Rams to register just 72 yards of rushing today. Josh Robinson added a spectacular interception towards the sidelines, sliding his feet in-bounds, while hauling in the interception. Robinson played much improved today and was blanketing receivers and not allowing the big play, which had hampered his career up until this point. The Vikings cornerbacks played well, but considering they matched up with third-string quarterback Austin Davis in the second half, caution should still be exercised until we see the secondary handle a top-tier quarterback.

Safety Harrison Smith hauled in an 83-yard interception touchdown, jumping Rams tight end Jared Cook's route, while taking the pass all the way up the sidelines. Smith timed the pass from Austin Davis and snatched the ball before it reached Cook's hands. Strong safety Robert Blanton started the game and led the team in tackles (7). Blanton was active in run support and wasn't beaten over the top on many occasions today. It will take a look at the film, but it seems Robert Blanton played better in the backend than many would anticipate.

Blair Walsh opened the game with a 52-yard field goal and later added another from 46 yards out, to open the Vikings scoring. Walsh didn't have any issues and has always enjoyed kicking in domes during his career. Jeff Locke punted five times today and was averaging 47.5 yards per punt. He dropped his longest kick of 52 yards, pinning the the Rams deep in their territory late in the first half.

Sharrif Floyd left the game with a shoulder injury late in the fourth quarter, but Coach Zimmer wasn't concerned. Marcus Sherels was hit hard in the stomach, but later returned to action. Xavier Rhodes also injured his groin and was on and off the field. Zimmer wasn't concerned with the severity of his injury either.

The Vikings will continue the 2014 regular season, during a home matchup with the New England Patriots next Sunday at noon.