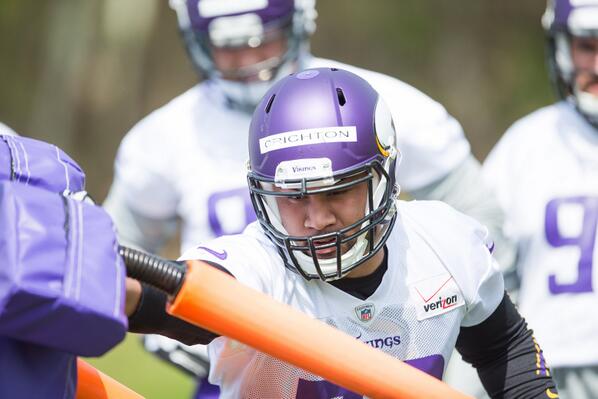 Daniel House analyzed the defensive end group and explains why the Vikings have some of the best depth they have had in recent seasons at this position.

The Vikings defensive line saw one of the biggest overhauls this off-season and the changes have been for the better. Defensive end Jared Allen left for the Chicago Bears and the Vikings used the off-season and draft to improve their defensive line. The group got much younger, but added skill and athleticism that is just waiting to be groomed. Mike Zimmer will be heavily rotating defensive lineman during games, while providing plenty of exotic looks. This was why the Vikings spent free agency and the draft working to build a more balanced group that can rush the quarterback. If you aren't athletic, position flexible, and willing to get the quarterback, the door will be wide-open for a quick departure. Aside from Brian Robison and Everson Griffen, who are the rotational defensive ends that will be making an impact? Let's take a look.

Brian Robison: Brian Robison has always been overshadowed by the hype of players like Kevin Williams and Jared Allen. Robison's time has finally come and he will be the veteran leader of the group this season. Entering his 9th season in the league, he will finally see extended action and will need to show he can become more than the young kid he has been for the last 8 seasons in the league. With two veteran leaders gone among the defensive line, the Vikings will be looking for Robison to be the consistent anchor of the Vikings new philosophies at defensive end.

Everson Griffen: There is no question GM Rick Spielman's top priority heading into the off-season was to resign Everson Griffen. Spielman knew what he had with Griffen and by adding other pieces such as Linval Joseph and Captain Munnerlyn, the defense will reap the benefits. Griffen has always shown an intense amount of athletic ability, but he has failed to put it all together with limited playing time. He now will have the starting role opposite Brian Robison, along with a big payday he was yearning for. With more playing time and work on his technique, along with the blending of his athleticism, Everson Griffen appears to be a nice triple-berry smoothie for the future.

Scott Crichton: Nobody excites me more heading into the 2014 season than Scott Crichton does. He has been overshadowed in the Vikings draft hype, but that will soon change when he hits the field this season. He is a first or second round talent that was somehow overshadowed during the draft process. Crichton comes in relatively polished and quite versatile. He routinely flipped between left and right defensive end for Oregon State and even moved inside to nose tackle, at times. Crichton has an extremely quick first-step and uses his hands very well, demonstrating both power and technique. He is an instinctive defender who can get up the field laterally at a fast pace for his size. With Mike Zimmer's rotational philosophy, combated with his insane ability to develop players with similar talents to Crichton, expect big things early in the season from the rookie defensive end.

Corey Wootton: Rick Spielman loves to sign NFC North players that the Vikings have been accustomed to seeing on Sunday. This year, that signing was Corey Wootton, who has battled injuries during his notable career with the Chicago Bears. He's extremely versatile and can play in the inside or outside, but he has edge speed to be successful in those efforts. He definitely will be intriguing to watch rotate through the defensive line during various situations. If he can stay healthy, the Vikings may have found a solid backup and rotational player on their defensive line.

Justin Trattou: Justin Trattou spent half of the 2013 season on the practice squad and suited up for one game with the Vikings last year. He spent time with the New York Giants in the past and never really has saw game action. His odds got much tougher when the Vikings drafted Scott Crichton and added Corey Wottoon in free agency.

Spencer Nealy: I really like Spencer Nealy and what he could bring to the table for the Vikings. He is very quick for his size and when the Vikings added him in the preseason, I liked his athleticism. Nealy spent half of the season on the practice squad and could do so again, developing his skills with the future in mind.

Raxim Cox, Jake Snyder, and Tyler Scott: None of these players seem to have any chance to land on a deep Vikings defensive line depth chart. Unless a defensive lineman is hurt, falls off a bike in Mankato, or something unforeseen happens, these players are merely practice squad options.

As a whole, the Vikings added two reliable players to supplant Everson Griffen and Brian Robison. Scott Crichton has immense potential that is waiting to be developed and Corey Wootton can provide rotational depth. The defensive end position is going to be critical in Mike Zimmer's defensive philosophy and the Vikings have four solid options that fit his vision.
Posted by Daniel House at 1:40 PM