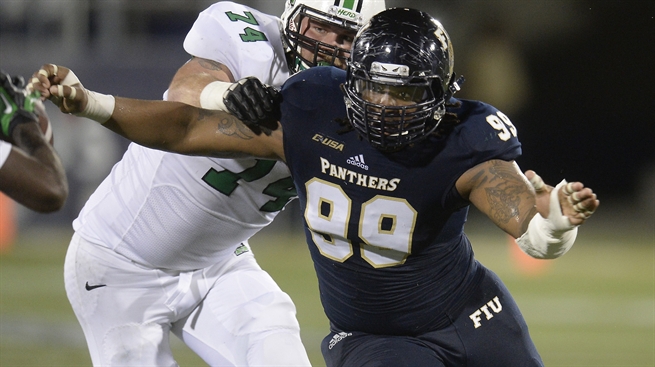 Daniel House continues to evaluate 'under-the-radar' players and analyzes Isame Faciane and the impact he could make with the Minnesota Vikings.


The Vikings defensive line is an extremely deep group and it will take a solid training camp to show the coaching staff who is worthy to claim a spot in this group. Defensive tackle Isame Faciane performed at a high level during his senior season at Florida International and corralled a career-high 53 tackles, leading all FIU defensive lineman.

He went under the scouting radar during the NFL draft process and has great size, along with the ability to line up at nose tackle or as a three-technique defensive tackle. I talked with Faciane back in June during Vikings OTA's and he has been awaiting the opportunity to show coaches his talent in training camp practices. He will be working closely with Vikings defensive line coach Andre Patterson during his time in Minnesota. Patterson coached Faciane at Florida International and the two have a great respect for one another. Faciane has great size at 6'4" 312 pounds, but his athletic ability is what excites many who have watched film of the defensive tackle. He has the ability to get off the ball very quickly, for a man with his frame and body structure. Faciane will be seeing reps at nose tackle, but he could also have flexibility to play some three-techinque, if necessary. His body type almost directly matches Linval Joseph's and they will be working together during practices to help improve as athletes.

Faciane needs to work on getting off the ball and not over-pursuing the play. He has the tendency to get too far up the line, making the ball carrier more difficult to tackle in run support. Faciane makes up for this weakness with his ability to rush the passer and get through the initial point of attack at the line of scrimmage. Don't be surprised if the Vikings don't give Faciane some looks as an interior pass rusher in third-down situations in the preseason. Mike Zimmer is going to heavily rotate defensive lineman and if Faciane can display his talents with limited reps, don't be surprised if he turns the heads of the coaching staff.

How realistic does it seem for a guy like Faciane to the make the roster? He would have to kick players like Chase Baker and Fred Evans to the curb and that will take some work. Not saying it can't be done, but the road won't be easy for the undrafted rookie. Since 2006, just 13.5% of undrafted rookies have made the 53-man roster with the Vikings and the chances are exactly the same for the practice squad, as well. Faciane will need to put together a good resume, which includes solid practice reps, while sending a statement in the preseason.

If Isame Faciane can execute those tasks, don't be astonished to see him land on the roster or the practice squad in August.