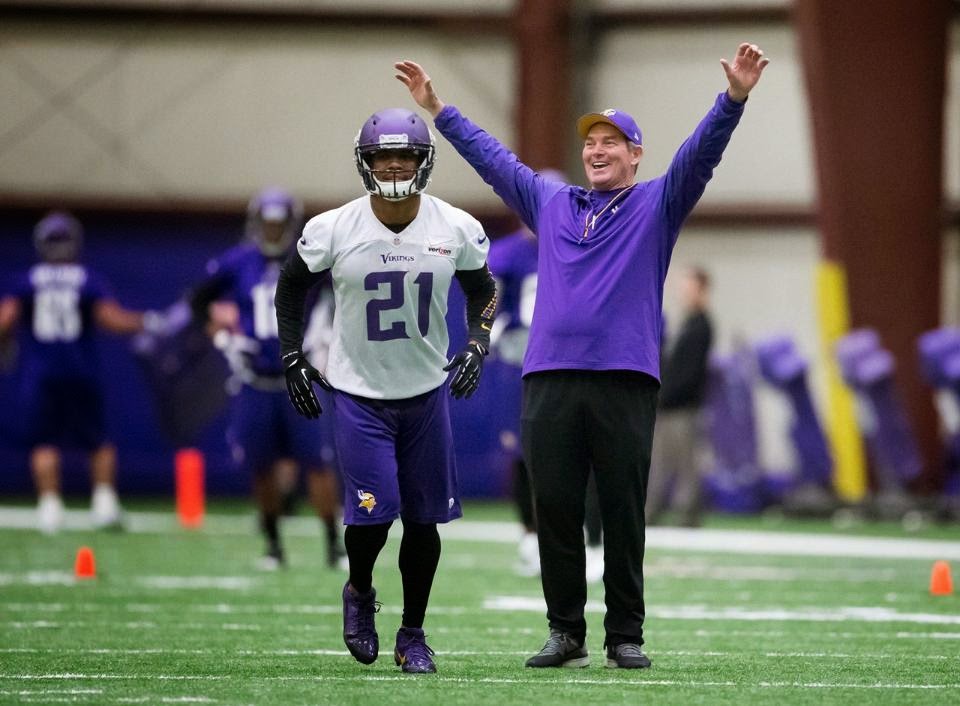 Mike Zimmer has grazed the sidelines with the Vikings for only a few months, but after three mini-camp practices, it appears he has provided an energy injection to the team.


When Mike Zimmer was hired as the Minnesota Vikings head coach on January 15th, he entered to a spreading disease. The new head coach entered the fold with over 30 years of coaching experience at various levels of play, but never as a head coach. How would he provide an injection to this squad? Zimmer hasn't taken the field for a game or even drafted a class of players, but he has already added energy to a lifeless squad. After just three days of practices at voluntary mini-camp, the players are responding with positive remarks. They haven't strapped on pads, played in a game, or went through the gauntlet of a 16-game NFL season, but there is reason for optimism. We can't make a bold statement after hearing about two excellent practices, so we'll have to remain on the confident side.

Zimmer took the fields of Winter Park with the full purple coaching outfit and a black whistle dangled on the outside of his neck. He didn't stand on the side and take the approach of a boss who lets his employees do all the work. Zimmer was in the middle of all the positional drills, shooting instructions to the players as they began their work for the year. The "hands-on" approach has been refreshing for the players and the energy floating throughout the halls can be seen through the eyes of the players.

"We’re out here and he’s actually grabbing guys and he’s showing them what to do, how to use their hands, how to do their footwork. And a lot of times you don’t get that, a lot of times you have head coaches kind of sit back and let their coaches do the work. Whereas he is taking it upon himself to make sure that every single person is doing the right thing," Robison explained.

He has spent the majority of his time in Minnesota attempting to promote team collaboration and has made changes throughout Winter Park to reflect this trend. Zimmer added a new meeting room with theatre style seating for players to interact and learn during meetings. He has added quotes throughout the facility, such as, "Tough teams win in the fourth quarter," and "Take ownership in something bigger than yourself." He continues to stress the importance of representing Minnesota and staying strong in grueling situations.

Mike Zimmer doesn't rely on his assistants nearly as much as Leslie Frazier once did, but he has positioned himself with successful coaches throughout his staff. Norv Turner will be the offensive liaison and brings over 35 years of coaching experience to that side of the ball. Zimmer has stressed the importance of being a coach who is available on both sides of the ball, as well. Players are stressing the complexity of Turner's playbook and how the ball will be distributed to various positions throughout the field. Greg Jennings stressed Turner's ability to maximize players abilities, while expecting top effort on each play. Norv will play a huge role in the NFL Draft and is the "expert regarding quarterbacks" according to Mike Zimmer. When asked about what he will look for in a quarterback, Zimmer indicated he wants a player who can be an extension of Norv Turner on the field, while keeping everyone on the same page, and winning games in the 4th quarter.

The pairing of Zimmer and Turner, combined with a coaching staff that has immense coaching experience will help this team grow quickly. There's appears to be a strong amount of energy in the room and with perfect attendance at the first mini-camp, the optimism is flowing.

Mike Zimmer wants the best out of his players, expects them to win, and will push them to be champions. He will make sure every player is accountable and won't sugarcoat anything about his players. Zimmer brings a no nonsense winning approach to Minnesota for the first time since Bud Grant prowled the sidelines of Met Stadium. Mike Zimmer hasn't coached a game for the Vikings, or been the through the grind of training camp, but the positivity and work ethic coming from this team is something that cannot be overlooked. Add a draft class full of talent on both sides of the ball and this team could be quickly heading in the right direction.

One thing is certain, Mike Zimmer will do everything he can do to bring a winning tradition to the state of Minnesota.
Posted by Daniel House at 6:57 PM