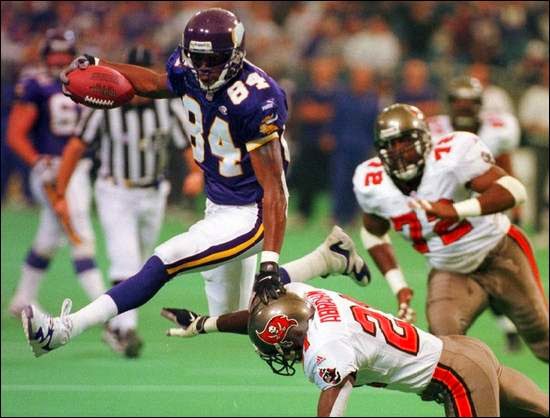 In the 54 years of the Vikings organization, the team has stuck gold by drafting successful players in the NFL Draft. As Minnesota prepares for the draft next week, we will look at the top 1st-round picks in the history of the team. Not many organizations have a group of players with as many accolades among their first round selections. The Vikings have a total of 5 Pro Football Hall-of-Fame members that have been elected from their first round draft classes. Below is a bio of each player, describing each of their accolades with the Minnesota Vikings. A poll will be listed at the bottom for you to vote for the best Vikings first round pick of all-time.

1964: Pick 6- Carl Eller: DE- Carl Eller took the field with the Minnesota Vikings in the 1964 season. Not many people believed he would be a fixture of the Vikings front-seven for 15 seasons. Eller was a famous member of the ferocious "Purple People Eaters," which is one of the most hallowed defense lines in the history of the NFL. The Vikings witnessed great success during Eller's career, winning 10 Central Division titles, while appearing in four Super Bowls during that stretch. From 1975 to 1977, he recorded a whopping 44 sacks, while pressuring quarterbacks on every pass. He appeared in six Pro Bowls and was enshrined in the Pro Football Hall of Fame in 2004.

1967: Pick 15- Alan Page- The Vikings owned three first round picks in the 1967 draft and spent a selection on one of the greatest interior pass rushers to play the game. Page battled for the starting defensive tackle spot in his rookie season and won the job just four games into the season. He never looked back, playing in 238 career NFL games, all but three of them as a starter. Page became just the second defensive player to win an NFL MVP in 1971. In 11 seasons with the Vikings, he recorded 173 sacks, while blocking 28 kicks. Page participated in four Super Bowls with the Vikings and was also one of the members of the "Purple People Eaters." He went on to be inducted into the Pro Football Hall-of-Fame and is one of the best defensive lineman to wear purple.

1968: Pick 1- Ron Yary- The Vikings owned the number one selection in the 1968 draft and spent it on a future hall-of-fame enshrinee, Ron Yary. Yary was a fearless run blocker and paved the way for Vikings running backs during his 14-year career with the Vikings. He led the Vikings to two NFL Central Division titles and nine NFC Central championships. During that stretch, Yary was named an all-pro six times and was elected to seven consecutive Pro-Bowls. He was an extremely fearless player and missed just two games in his entire NFL career. He went on to be elected to the Pro Football Hall-of-Fame and has been deemed one of the greatest offensive lineman to wear an NFL jersey.

1973: Pick 12- Chuck Foreman- Chuck Foreman was the king of the spin move and is one of the greatest running backs to wear a Vikings uniform. He was named offensive rookie of the year in his first season in the league. He not only could run out of the backfield, but led the NFL in receptions in 1975. Foreman finished second in rushing yards that season (1,070), while reaching the end zone 22 times. He was a five-time Pro Bowl selection and played in three of the Minnesota Vikings Super Bowls.

1983: Pick 19- Joey Browner- Joey Browner will be forever known for his fearless style of play, becoming one of the greatest players in the history of the Vikings secondary. Browner posted 987 career defensive stops and holds the Vikings record for sacks (9.5) by a defensive back.  Browner attended six straight Pro-Bowls and was named to the NFL's all-decade team in the 1980s. He played a pivotal role in the Vikings defensive success in the 1980s.

1985: Pick 4- Chris Doleman- Doleman was one of the most fearsome pass rushers to play in the NFL throughout the 1980s. He quickly led the Vikings with 11 sacks in 1987 after he made the move to the defensive end position shortly after joining the NFL. Doleman would later add six more sack titles with the Vikings. His finest season came 1989, when he recorded 21 sacks, which placed him just one short of the NFL sack record at the time. In 1992, Doleman was named the NFC's Defensive Player of the Year after he led the Vikings with 14.5 sacks, had 64 tackles, returned an interception for a touchdown, forced six fumbles, recovered three fumbles, and had a safety. He missed just two games in his 232-game NFL career and became one of the most fearsome pass rushers in the league. Doleman was enshrined into the Pro Football Hall-of-Fame in 2012.

1988: Pick 19- Randall McDaniel- McDaniel was thrown into the flames during his first season with the Vikings in 1988. He started in 15 of the 16 games that season and was named to the All-NFC team that year. Vikings coaches and fans knew McDaniel was grooming into a very special player after just one season in the league. He started 202 consecutive games and earned 12 straight Pro-Bowl bids. McDaniel blocked for six different 1,000-yard rushers and five 3,000-yard passers during his 14-season career. He is considered one of the greatest offensive lineman to play in the NFL and was enshrined into the Pro Football Hall-of-Fame in 2009.

1993: Pick 21- Robert Smith- Robert Smith retired as the Vikings all-time leading rusher and one may question what he could have done if he hadn't been forced to prematurely retire. He rushed for 1,000 yards in each of his last four seasons and finished second in total rushing in the NFL during the 2000 season. He finished with 6,818 career yards, setting the Vikings rushing record, which was later broken by Adrian Peterson.

1998: Pick 21- Randy Moss- There is no player that has been more electrifying in his NFL career than Randy Moss. He fell into the Vikings laps in 1998 and was paired with Cris Carter, producing one of the deadliest 1-2 punches in the history of league. His speed and physicality coming off the line of scrimmage and his uncanny ability to make freakish plays, made him one of the most explosive players to ever play the game. He is well-known for his off-the-field antics, but there is no sugar-coating his abilities when he took the field on Sunday's.

2007: Pick 7- Adrian Peterson- We have all had the pleasure to watch Adrian Peterson suit up in a Minnesota Vikings uniform. Peterson quickly became one of the marquee players in the league after being named NFL Rookie of the Year in 2007. He rushed for the NFL single-game rushing record by accumulating 296 yards against the Chargers in 2007. He was named Pro Bowl MVP in 2008 and believe it or not, the best was yet to come for Adrian Peterson. Despite suffering an ACL and MCL tear in December of 2011, Peterson returned less than 9 months removed from major reconstructive knee surgery. He managed to rush for 2,097 yards in 2012, finishing just 9 yards short of Eric Dickerson's single season rushing record. He led the Vikings to the playoffs and was named the league MVP, while becoming one of the greatest running backs to take the field in NFL history.