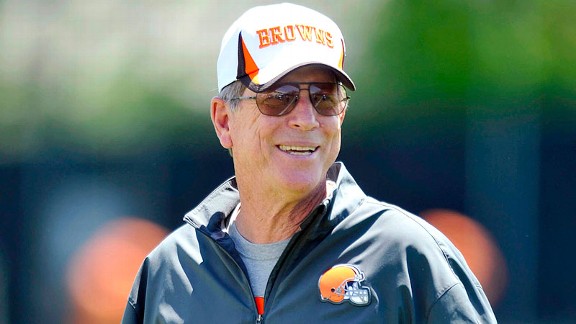 The Vikings have reportedly hired Norv Turner and George Edwards to their coaching staff today. What does this mean for new head coach Mike Zimmer and the Minnesota Vikings? Daniel House tells you all about this and more in his latest post.

Turner's work with wide receiver Josh Gordon and Jordan Cameron, along with the quick development of third-string quarterback Brian Hoyer were encouraging signs in 2013. A key philosophy to Turner's system is the vertical passing game. The Browns threw plenty of deep balls last season and ranked fourth in passes attempted over 20 yards this season. In the "Air Coryell" offense, Turner's fondness for stretching the field, will make finding the correct quarterback to the run the scheme an absolute necessity. Turner likes to utilize tight ends in the passing game to open up the vertical edges of the field and with Kyle Rudolph's skill set, it seems likely this partnership will be a good decision. The Vikings have talent on the offensive side of the ball, with the best running back in the league, a solid offensive line, an emerging Cordarrelle Patterson, the quarterback position will be the huge area for Norv Turner to address in his offensive plans, whether it be through the draft or with a quarterback on the current roster. Every offense Turner has been involved with has saw a rise in statistics and it is encouraging for a Vikings offense that has talent that was poorly utilized at times in 2013.

Fox Sports' Alex Marvez is also reporting Turner's son, Scott will join Norv as the quarterbacks coach this season. Scott Turner spent 2013 with the Browns as the wide receivers coach and has experience as a quarterback in college. Turner spent his college career as a quarterback at UNLV and coached on the Pittsburgh Panthers coaching staff following his college career. He spent time with the Panthers a quality control assistant and will now see time as the Vikings quarterback coach in Minnesota.

As for the defensive side of the ball the Vikings are reportedly adding George Edwards as their defensive coordinator, per Alex Marvez. Edwards has been in the league since 1998, when he worked with Mike Zimmer as his linebackers coach. He has coordinated Washington and Buffalo during two stints and most recently has coached the linebackers for the Miami Dolphins. Bill Parcells instilled the 3-4 system within Zimmer and Edwards when they were in Dallas, but both worked in 4-3 systems in Miami and Cincinnati, respectively.

This likely means the Vikings will run the same 4-3 base defense, but Zimmer and Edwards will collaborate by adding a hybrid 3-4 defense, along with aligning in a 3-3-5, which Zimmer did during his time with the Bengals. Edwards is a coach that hasn't been a huge name in the league, but lets face it, Mike Zimmer is going to have a huge input in the scheme and the defensive calls, which is why he is a better defensive head coach than Leslie Frazier. He isn't afraid to be outspoken and with the coaches he has surrounded himself with, it seems he is off to a very encouraging start just one day into his tenure as the ninth coach in Minnesota Vikings history.