Jerry Gray joined the coaching staff this week, but how has he performed in his 15-year coaching career? Daniel House highlights the strengths and weaknesses and what Gray will have to work with as he looks to improve a puzzling Vikings secondary.


As the coaching staff is becoming aligned for Mike Zimmer in Minnesota, it appears the team is looking for plenty of coaching experience as they add assistants to the organization. It started earlier in the week as the Vikings added former Titans defensive coordinator Jerry Gray as their secondary coach.

Gray has over 15 years of coaching experience and most recently coordinated the Tennessee Titans defense for three seasons. He also was a rather talented NFL player and spent nine seasons in the league as a very successful defensive back. Gray was selected to the Pro Bowl four times from 1986 through 1989 during his time with the Los Angeles Rams. In his final appearance he earned Pro Bowl MVP honors after recording 7 tackles and a 51-yard interception return for a touchdown. He tallied 28 career interceptions, including six during the 1992 season he spent in Houston with the Oilers. He most recently was acknowledged for his play in college at the University of Texas and was inducted into the College Football Hall of Fame in 2013. Not only was his play on the field exceptional, but his coaching tenure has been rather illustrious over the last 15 years. His coaching career began in 1995 as a defensive backs coach for the SMU Mustangs. After two seasons in the college ranks, he worked for the for the Tennessee Oilers as a Defensive Quality Control coach from 1997 to 1998 before being promoted to defensive backs coach in 1999. In 2001, he was hired  to coordinate the Buffalo Bills defense. He served as the defensive coordinator for the Buffalo Bills from 2001 to 2005, where his defense ranked second in total defense in 2003 and 2004. After the 2005 season he was hired by the Washington Redskins to serve as their defensive backs coach. Later in 2010, Gray was hired as the new defensive backs coach for the Seattle Seahawks. After a short-stint in Starbucks nation, Gray agreed to return to his alma mater, the University of Texas as the assistant head coach and defensive backs coach. After spending one season in the college coaching realm, he missed the NFL and rejoined the Tennessee Titans as their defensive coordinator, which was a role he filled for three seasons.

Who will he work with?

With promising rookie Xavier Rhodes showing strides this season, along with emerging defensive backs such as Shaun Prater and Marcus Sherels, the Vikings witnessed some promising talent in the backside of the defense. Chris Cook and Josh Robinson were ripped to shreds in 2013, but with a new coaching staff entering the fold, they could both be developed with some extensive work. It seems unlikely Cook will return unless he is brought back with the thought of becoming depth or if Mike Zimmer and Jerry Gray can perform a magical turnaround for the young defensive back. Josh Robinson could be developed and with raw athleticism and a great skill-set, he needs coaches who can develop his footwork and ball skills in the secondary. With that said, it seems likely the Vikings may pursue free agency to find depth and stability in the secondary. Titans free agent Alterraun Verner comes to mind as Jerry Gray enters the Vikings coaching stable. Verner developed under Gray's coaching and with the hands-on approach he would receive from a familiar face, the possibility of a reunion isn't unrealistic. Verner led the Titans with five interceptions last season and was elected to the Pro Bowl this season in his fourth year in the league. I will profile him a post coming later this weekend, but one thing is certain, Gray will need help in the secondary unless he has a magic wand to transform Chris Cook and Josh Robinson into feasible cornerbacks in this league.

How has he fared in the NFL?

His defensive scheme was quietly stellar last season and his secondary played particularly well during that span. According to Pro Football Focus, every Titans defensive back except two (with 36 total snaps between them) had a positive rating last season. Much of this could be attributed to Gregg Williams joining the Titans coaching staff last season. Gray and Williams added more blitzing schemes to the defense which created pressure and forced mistakes and opportunities for the Titans defensive backs. Williams was a defensive consultant for the Titans, but in a tag team effort with Gray, they improved from a 2012 season in which the Titans set an NFL benchmark in points allowed.

To put the Titans dramatic defensive improvement into context, the Titans were one of the worst teams at stopping opponents on 3rd-down. According to Pro Football Focus, the Titans defense allowed 39.72 percent of 3rd-down attempts to be successfully completed, ranking them 22nd in the NFL. The Titans improved in 2013, allowing opposing offenses to convert on 3rd-down just 34.3% of the time, which was seventh best in the entire league. As for the Vikings, they allowed teams to convert a third-most 44.2 percent of the time in third-down situations. In yards allowed the Titans awarded 337.9 yards per game in 2013, which was a slight regression from the 2012 season in which they permitted 374.5 yards per game. The Vikings awarded 389.3 yard per game, which was higher than both years Gray was in Tennessee.  We haven't witnessed a shut-down group in many seasons and Mike Zimmer and Jerry Gray will look to collaborate and fix this problem immediately. 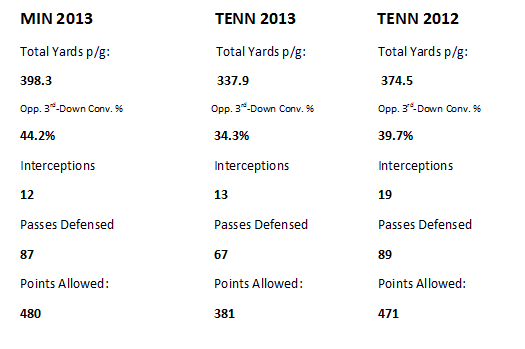 Gray will have plenty of work in front of him as he faces an eerily similar defensive situation as he did when he entered 2013 with Tennessee. The Titans were historically bad on third-down and were nearly identical in points allowed, which are both areas the Vikings will look to improve in 2014. With more time for Gray to focus on the specifics of the defensive backs, it seems likely he can return to his form position and provide his expertise to Vikings secondary. Not only will he be able to provide his expertise, but he will be with a defensive mind in Mike Zimmer that has produced some of the top defenses in the history of the league. With the work of these two individuals, along with the coaching staff that is being assembled, they will look to create one of the greatest defensive breakthroughs in the history of the Vikings franchise, which won't be an easy task.
Posted by Daniel House at 8:31 PM