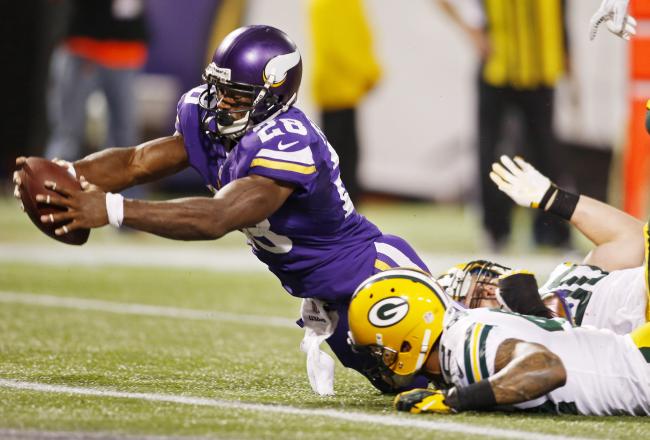 Daniel House provides you with all the facts and figures necessary for the Vikings to knock off the arch rival Green Bay Packers at Lambeau Field. He talks about all of this and more in his latest preview post.


After facing a very tough challenge in Seattle last week, which yielded a result many were anticipating, the Vikings get a chance to redeem themselves in a matchup with the arch rival Packers. Green Bay is without star quarterback Aaron Rodgers, meaning they will be turning to Scott Tolzien for the second straight week. Since Rodgers injury, the Packers have lost three consecutive games and struggles have been cited on both sides of the ball. The Green Bay defense has allowed 27 points in each of their last three contests and the grouping has awarded 400 total yards in nearly three straight games (415. 442, 394). This is a problem not even the savior Aaron Rodgers could fix if he were on the field. It is Border Battle 2013 and both teams will bring their best efforts give the amount of pride that is on the line, but how do the Vikings execute the perfect game plan this week?

The Vikings will need to improve on offense and keep the ball out of Green Bay's hands. Turnovers were a big issue last week and Christian Ponder awarded two interceptions and a forced fumbles in the latter stretches of the game. If the Vikings want any chance to compete in the hostile environs of Lambeau Field, they can't award the Packers with a short field. Scott Tolzien will struggle if he needs to drive long lengths of the field, but if he is provided with great field position, his odds improve drastically. Adrian Peterson is battling a groin injury that has plagued him for the past few weeks, but all indications point to him being ready for today's game. Given the cold weather, the Vikings will likely develop a stronger rotation between Toby Gerhart and Peterson, which should provide a nice change in pace among the Vikings offense. John Carlson made a nice impact in limited targets last week and should be a focal point again this week. The Packers have struggled defending tight ends and have allowed a fifth-most five touchdowns to opposing pass catchers. The Vikings will look to incorporate John Carlson using crossing routes and picks, which have worked well over the past three weeks. The offensive line had its problems last week and Phil Loadholt allowed pressure frequently on Sunday. Protection needs to be adequate today if the Vikings want any chance to compete, because we all know how skittish Ponder has proven to be in the pocket.

I must pat the Vikings defense on the back just a little bit after last week's performance. Yes, this group is still one of the worst in the league and they allowed an atrocious touchdown drive in the final minutes of the first half in Seattle, but I saw a slight improvement over the earlier weeks of 2013. After three turnovers last week, the defense was required to stop the Seattle offense deep in their own territory. Factor in the 12th man and CenturyLink Field into the equation and the situation becomes twice as complicated. In this week's game, the Vikings defense will square off with practice squad product and former Wisconsin Badger Scott Tolzien. The key is to really pressure Tolzien and force him into uncomfortable situations, which will in turn cause him to make mistakes. Eddie Lacy has been a major asset to the Packers offense and is on pace to become a 1,000 yard rusher this season. The Vikings allowed Lacy to register 94 yards and a touchdown in the previous matchup at Mall of America Field this season. This offense has become much more one dimensional in Aaron Rodgers absence and teams have stopped the run, forcing Tolzien to throw the ball. This needs to be the focus of the Vikings defense, along with winning the turnover battle, which is crucial in road games in the NFL. You may think it sounds crazy, but today may be the best chance the Vikings have had to beat Green Bay in a very long time.

Cordarrelle Patterson introduced himself to Green Bay early in the first matchup in Minnesota this season. Patterson took the opening kick 109 yards for a touchdown and he failed to see a ball the rest of the evening. This trend will probably continue and the Packers will likely kick the football short or find other alternatives to avoid kicking the ball to one of the most explosive kick returners in the league. The Vikings punt return team allowed Micah Hyde score on a punt return touchdown, which shifted momentum in the first matchup. The special teams coverage team needs to isolate Green Bay and keep them deep in their own territory, which increases the Vikings chances to win.


The Vikings main injuries are with Josh Robinson who suffered a fractured sternum and Erin Henderson who missed all week of practice for a personal matter. This opens the door for Audie Cole and Michael Mauti to see rotational action at middle linebacker, which is something to watch very closely.

The Packer have hit the injury bug and five players have been ruled out, including three defensive starters and Aaron Rodgers on offense.

The Vikings need to avoid turning the ball over, keep the ball in our hands, pressure Tolzien, stop Lacy, and more importantly pick up a win against Green Bay at Lambeau Field!