Vikings and Packers End in Draw 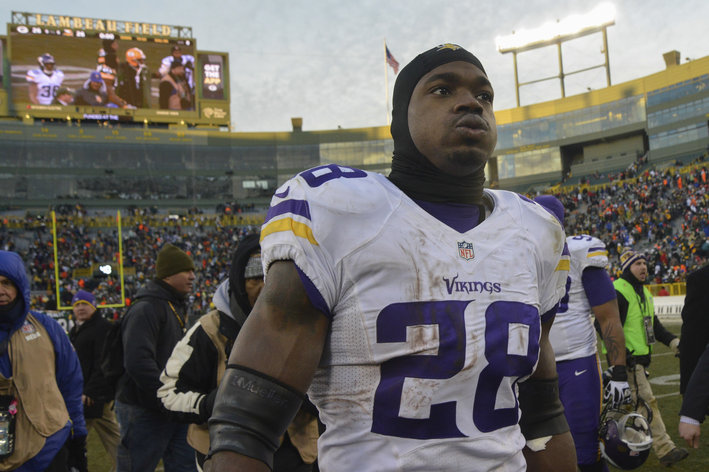 Daniel House describes the bizarre sight as the Vikings tied the Green Bay Packers in a game with tons of missed opportunities.


The Vikings and Packers did something that hadn't happened since Fran Tarkenton's final season with the Vikings in 1978-a tie. The Vikings controlled their own destiny and at one point led by 16 points in the 4th quarter. The Packers decided to part ways with quarterback Scott Tolzien after entering the 4th quarter 7 for 17 with just 90 yards passing. Matt Flynn entered and led the Packers to 60-, 77-, and 80 yard scoring drives as Green Bay scored 16 unanswered points and registered a whopping 13 first downs. Penalties were critical in the fourth quarter and after failing to register an assessment in the first half, the Vikings committed three key fouls that led the Packers to their first scoring drive of the fourth quarter.

Finally, with a 23-20 lead, Everson Griffen jumped offside on a 4th-and-6 that resulted in a 28-yard completion to James Jones at a critical point in the game. The Vikings defense managed to hold the Packers to a field goal on three tries from the Vikings 12. The game went to overtime and again, penalties became critical as Robert Blanton was flagged for two defensive holding calls in his new role as the nickel cornerback. The Vikings offense was lifeless in overtime and they managed to share field goals with the Packers in the extra period.

Both offenses couldn't move the ball and the game ended in a draw for the 341st time in NFL history. This game was the first to ever end with a 26-26 final score in the history of the league. Again the Vikings defense struggled in late situations, which has been the tune for this ball club in all of the games they have lost. No game from this team feels like it is ever over, even if the odds are extremely high. The Vikings had their share of opportunities on offense and as the Vikings led 23-7 in the third quarter, Christian Ponder perfectly placed a fade to Cordarrelle Patterson that went right through his hands. The completion would have set the Vikings in a goal-to-go situation and would have put extreme pressure on the Packers offense.

Early in overtime, Ponder fired a pass in the back on the end zone and the ball was slightly tipped and Cordarrelle Patterson took his eyes of the pass for a split second as the ball fell aimlessly to the frozen tundra. The Vikings settled for a field goal and had an opportunity to put the game away, but failed to do so. It seems like the same broken record for this team and it is frustrating to those involved. There were plenty of bright spots in this game and players like Audie Cole and Toby Gerhart were very impressive. Cole played 6 snaps all of last season and entered for every single play (94) in yesterday's contest. His huge blitz hit in overtime provided the Vikings with the ball and a chance to win the game with a touchdown. He corralled a whopping 13 tackles and a sack in his debut as the man in the middle of the Vikings defense. Just two weeks ago, the Vikings released Cole and he was on the free agent market for several days, until the team resigned him when the roster finally became healthy again. He made some mistakes and missed tackles, but this is expected from a player entering his first game as a starter. He has won the job at middle linebacker and since his inauguration in the league he has seemed to make plays and he will always be remembered for his interception performance against the Bills in the preseason of his rookie year. The kid makes plays and those are encouraging signs for a Vikings defense that isn't filled with many positives.

On another defensive note, Xavier Rhodes saw his first action in man coverage with Josh Robinson absence and he played his best game as a pro. Rhodes has proven he over thinks in zone coverage and if the team can utilize him correctly, I think he can become a very nice cornerback for the future. He is very aggressive as he presses receivers at the line of scrimmage and that is the edge you like to see from a pro.

As I mentioned, Toby Gerhart carried the ball well and corralled 91 yards on just eight carries. His legs look fresh and he was shedding tackles, en route to an 11.4 yards per carry average. I question why he didn't see more looks late in the game, especially due to his success and Adrian Peterson's nagging groin injury that was clearly bothering him. Peterson still finished with 146 yards on 32 carries and reached the end zone in the second quarter. In healthy stages, he could have rushed for over 200 yards, as he was tackled by a shoe string on several occasions.

As for Christian Ponder, he finished 21 for 30, along with 233 yards and a touchdown. He didn't create a turnover, but telegraphed a pass early in the game that was dropped by Davon House. Ponder also fumbled a critical snap in over time that resulted in a six-yard loss as the Vikings were moving the ball. Once again, Ponder is showing how inconsistent he can play throughout the duration of the games. In moments he led the team on very nice touchdown drives, but fumbling snaps and running up the middle when the team needed every second at the end of the game, are the mistakes quarterbacks in this league cannot make. This team has a ton of talent and it was proven at Lambeau with the way young players such as Audie Cole and Robert Blanton played in their first big roles in the league. As a fan emailed me yesterday, they described the loss as like kissing your ugly sister. It would have been great to win, but we didn't win or lose and we preserved our top five draft status. Obviously you want to win the game, but draft status is still important and even if you have to awkwardly look in the eyes of a Packers fan, it doesn't matter. It is time to play as many young players as possible, play hard each and every game, and let the chips fall for May as we look to draft a new quarterback that can take this team to elite status. Win, lose, or draw, there were positives and negatives and the game was very bizarre, but we have much to be thankful for as the Vikings play hard each week and will turn this ship around as quickly as they can. All it will take is one savior-well, maybe....
Posted by Daniel House at 9:06 AM