Keys to Victory for Sunday's Game in Chicago 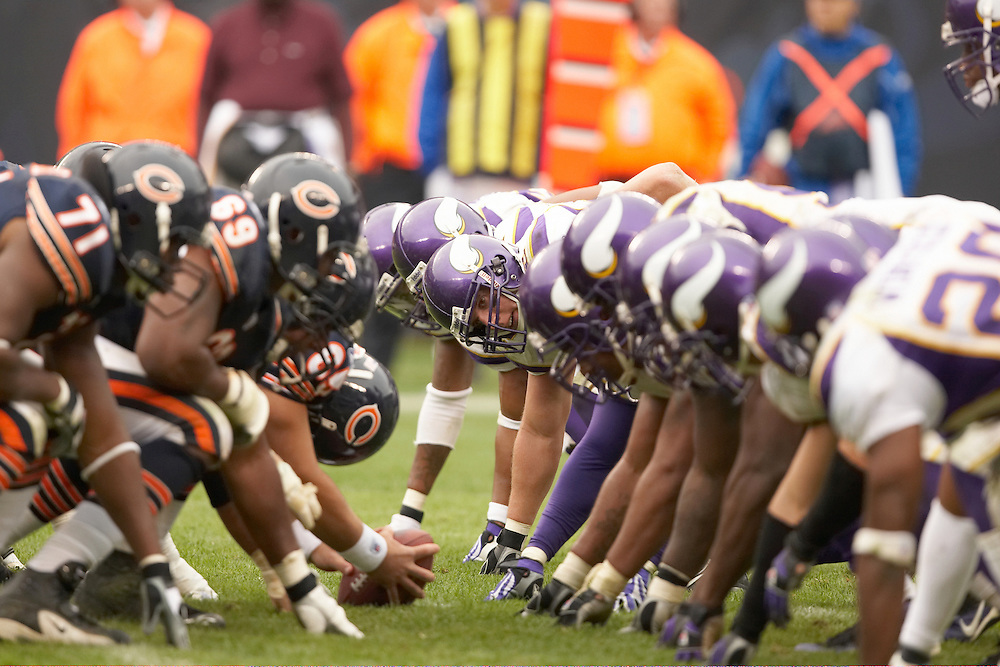 How do the Vikings win in Chicago? Daniel House discusses his keys to victory for a crucial divisional matchup against the Chicago Bears on Sunday. Follow the jump to read about this and more in his latest post.

The reality is Christian Ponder didn't play well on Sunday, but he had no time to throw. Ponder has the tendency to hold the ball too long or not step up in the pocket, which does adds to the issue. All good teams place the quarterback in the best situation to win with good blocking, great wide receivers, and a gameplan, but right now the Vikings are missing two of the keys. If the offensive line can provide Ponder with time, he has no excuses to not find open receivers. To add, if the protection is better and a passing game evolves, more holes will open for Adrian Peterson to do what he does best. If this all can happen, the Vikings offense will operate much better from second and intermediate as opposed to second and long.

If this team is going to play with the big boys in this league, they need to not just pressure the quarterback, but convert on sacks. The defensive line group was very good at hurrying the quarterback and applying hits, but they couldn't convert. This team is not built to cover and allow opposing quarterbacks to buy enough time to find the weakness in the secondary. With a Bears offensive line that is unproven, players like Jared Allen and Everson Griffen need to take advantage. Given the addition of Kevin Williams returning from a knee injury, this should help improve interior run and pass support.

Christian Ponder was at the helm of four turnovers, including a fumble and three interceptions. If teams are awarded extra opportunities with a short field, it will be very tough for the Vikings to win games. This team is not structured to play from behind and turnovers will eventually cause the game to get further from reach. Ponder threw a huge interception on a terrible decision where he attempted to throw the ball away just before halftime last week. It could have prevented a stalled drive where the Vikings were leading 14-6 and could have entered halftime with a 17-6 lead, but instead the momentum shifted and the Lions entered the break down 14-13. These types of turnovers can't happen this week, especially against a Bears defense who is known for causing turnovers.

Chad Greenway and Erin Henderson have been with this team long enough, that they must start being leaders at the linebacker position. The coverage abilities with this group are less than desirable they aren't as physical as they should be. Greenway played uncharacteristically bad in week one and that shouldn't be happening from the leader of the position. With the criticism, I feel as if Greenway will be motivated to play well and lead the defense this week. The bigger concerns stem with Henderson and Marvin Mitchell, especially regarding coverage and run support. Desmond Bishop was signed as a free agent with the thought of him becoming the outside linebacker with Erin Henderson holding up the middle. In the preseason Bishop proved himself as a run support linebacker who was very good in gap assignments. Mitchell and Henderson have struggled in both these avenues, which makes me wonder how long it will take for Bishop to enter the rotation in the middle or outside of the defense? He may see some experimental time in tomorrow's game, but if the linebackers cover Matt Forte as poorly as Reggie Bush last week, screen passes will be prevalent all day.

Punt the Ball with Distance

Jeff Locke played indoors last week at Ford Field and couldn't manage more than a 34.8 yards per punt average. This is completely unacceptable and forces the defense to work twice as hard with less field position. Now, Locke hits a whole new avenue as he kicks in the Windy City this week, where punting for distance and gaining loft are critical in the conditions. If the Bears are awarded with the ball at the 50-yard line every possession, expect the Vikings to struggle. This puts much more strain on the defense and causes them to wear down as the game continues. One thing is certain, if Locke and the coaches haven't figured out the issues from a mechanics standpoint, he will struggle, which in turn means the Vikings will need to find a way to improve the punt team.

Play with Passion and Grit

Where is the drive and passion from this group? Last year, the team defied odds by finishing with a 10-6 record fresh off of a 2011 campaign that resulted in a 3-13 season. I didn't see the emotion from this group of players in week one versus Detroit. The body language was lethargic from the start and several players looked very uninspired. Last season, this group won crucial football games because they had the drive and determination to play their best. Now facing a critical divisional game on the road with the chance at losing and going 0-2 overall and in the division, I would hope there would be a larger sense of urgency. This team has talent, but they need to show passion and grit like they displayed in 2012 if they want to win football games and ultimately have a chance for contention in the NFC.

The coaching staff needs to nail the gameplan down, make better adjustments during the game, and better utilize personnel. If each player follows their responsibility, the Vikings will defeat the Chicago Bears and receive a much needed divisional win.