A Disappointment in Detroit: Where do we start? 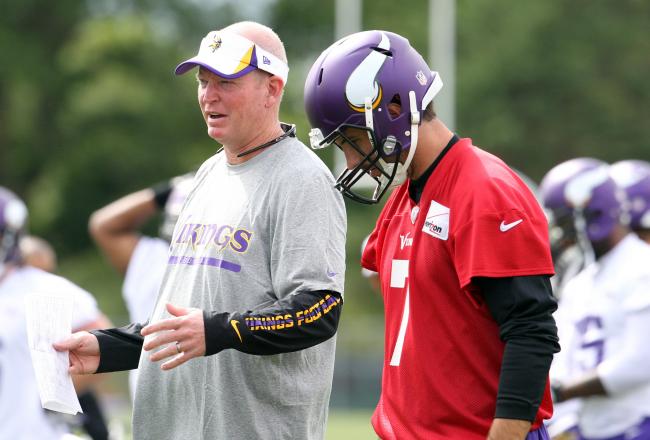 Daniel House addresses his concerns from a diseased 34-24 loss to the Detroit Lions. Is Bill Musgrave a 'hitch' in the Vikings offensive step? He explains this and more in a high-spirited post.


Before I stomp into a terribly sloppy 34-24 loss to the Detroit Lions in week one, I would like to add positives to the Vikings thunderstorm of an opener.

Jerome Simpson wasn't the same Jerome Simpson we witnessed last season, he developed into an athlete in the offseason. Simpson finished the day with seven receptions for 140 yards, including two grabs of 47 and 44 yards. The 47-yarder came off a beautiful play-action pass from Ponder and a better full extension diving catch by Simpson. This play set up a Adrian Peterson four-yard touchdown that closed the gap to 27-24.

Harrison Smith was the highlight of the Vikings defense and played a huge role in allowing Calvin Johnson to finish with just 37 yards on four catches. He recorded several beautiful hits, including an annihilation of running back Reggie Bush.

Although nobody could stop Reggie Bush, the Vikings secondary played better than anticipated, considering the amount of time they were on the field, combated with limited pass rush from the defensive line. The Vikings run defense was a huge concern and I attribute this to two huge keys that changed the landscape of the Vikings defense this offseason. Antoine Winfield was one of the best run support cornerbacks in the league, which single-handedly improved the interior run defense. The Vikings were without 11-year veteran run stuffer Kevin Williams, which makes a huge difference when it comes to interior containment. Despite all of this, the Vikings defense was on the field 13 minutes longer than the Lions grouping. With the offensive failure, the defense was placed with the weight of a sumo wrestler on their shoulders.

Finally, Adrian Peterson reminded everyone in the league why he is the reigning MVP of the NFL. He took the Vikings' first play from scrimmage 78 yards for a touchdown, but slowly whispered away as the Vikings offensive line was in absolute shambles.

Well, that summarizes everyone who played well today, now I will stomp my feet.

This trend is getting old for many Vikings fans, the inability to win games that are within grasp. The Lions single handedly awarded this team opportunities and the Vikings failed to execute. The predictable offense is getting old and makes this team one of the easiest teams to scheme for each week. Offensive coordinator Bill Musgrave discussed the idea of using packages that would involve the athleticism of players such as Cordarrelle Patterson and Jarius Wright. Where is it?

I understand the quarterback play wasn't impressive, but that is no excuse. With the athleticism on this team, neither Ponder or Musgrave can use 'limited talent' as an excuse. When Ponder turns the ball over four times, this team won't win many games. But with the complete ineptitude of Musgrave, I can't muster the energy to completely blame Ponder. Yes, there were multiple moments that were inexplicable from Ponder including an idiotic attempt to throw the ball out of bounds, which resulted in a balloon being launched for an interception. Christian isn't the dream scenario and might not be the quarterback of the future. He is skittish in the pocket, can't make decisions, and has zero pocket presence. This is his third year and it is time to see results.

I'm tired of the playbook and the same menu every week. I question whether this could contribute to Ponder's continued struggles, but with the weapons and experience he has acquired, there can't be any excuses. Musgrave faltered on third and one in Lions territory, by rolling Ponder to his left, and giving him a difficult throw to tight end John Carlson. When the correct plays are called and Ponder has time to throw, he seems to make better decisions. Ponder connected with Simpson across the middle for 47 yards in the third quarter, but the playbook wasn't opened for use until the 3rd quarter.
The entire first half followed the same trend; run, run, throw for 5 yards, and punt the ball short to the Lions 50-yard line. How can this be acceptable? Brad Childress was fired because he couldn't sustain drives or utilize his personnel to the best of his ability. I don't think Musgrave's offense has been an improvement over the 'Chilly Perkins Menu.' The Vikings have had the entire offseason to gameplan for the Lions, but it appeared as if they played on Monday night and had 5 days to prepare.

Lions offensive coordinator Scott Linehan proved that a scheme can make a difference in the outcome of a game. Reggie Bush was used to perfection and was offered the perfect mix of running (90 yards) and pass catching (101 yards).

How much longer will we continue to watch defensive coordinators scheme this team to pieces every week? With a quarterback who is indecisive and incompetent in the pocket, combined with an offensive coordinator who has continually struggled with creativity, the Vikings may be in for a long season.

The offensive line is puzzling, specifically at left tackle, where Matt Kalil has struggled. He has shown zero emotion in the preseason and acted as if he didn't care at any point of today's game. Last season he played like a top left tackle in this league, but during Sunday's game he continually was confused on stunts and caused Ponder to roll across his body on several occasions. With a team that relies heavily on the legs of Adrian Peterson, the offensive line can't play like this the entire season. This just added another issue to a Vikings offense that was anemic from the outset of today's contest.

The defense was like a tornado that caused havoc to all plans for this team. The defensive line disappointed and was unable to reach Matthew Stafford at any point in the game. The Lions started an inexperienced player in Riley Reiff at left tackle, but the Vikings still couldn't reach the quarterback. This put pressure on the secondary which played well under the circumstances they faced.

Despite only five penalties today, two of the Vikings infractions shifted the momentum of the game. One was questionable, as Xavier Rhodes was called for pass interference on a ball that was thrown well over the head of Calvin Johnson. The other penalty was huge and caused momentum to swing in favor of the Lions. Letroy Guion hit Matthew Stafford in the head on 3rd-and-18, drawing a roughing the passer call, keeping the Lions drive alive.

The linebacker group was atrocious this entire game, wandering and trailing aimlessly behind wide receivers. Chad Greenway played uncharacteristically poor by missing tackles and being out of position on multiple occasions. Marvin Mitchell got the nod over Desmond Bishop, which should change after today's festivities. Mitchell was caught snoozing on two occasions, one resulting a Lions touchdown as he trailed behind the wide receiver. Erin Henderson had moments of success, including an interception in the 2nd quarter, but ultimately he should be leading this group of players. Considering the lazy, uninspired, and out position play from the linebacker group, significant changes such as Desmond Bishop entering the rotation should be addressed this week. With the depth and experience from this positional group, they were considered a strength heading into the season, but with the inability to execute on several occasions, the linebackers were very disappointing today.

To close, the final score was very deceiving and if the Lions could have eliminated mistakes, this game could have been decided significantly earlier in the contest. They botched a field goal attempt on the opening drive, had what looked like a touchdown catch by Calvin Johnson overturned, and had a touchdown taken off the board on a personal foul penalty during a interception touchdown by DeAndre Levy. The Vikings were very lucky that they even were remotely awarded a chance to win considering the circumstances.

Jeff Locke can't play like this during the rest of the 2013 season, or he won't be around long. In his debut as Vikings punter, he averaged just 34.8 yards per punt, giving the Lions a short field to work with on more than one occasion. When Coach Frazier was asked about the kicking situation he was rather frank, "We allowed them the ball on the 50 or inside the 50 and we can't do that, it's something we need to fix." Next week he hits the outdoor elements in the 'Windy City', which adds another variable to the quadratic equation. If he is kicking this way indoors without the elements factored into the situation, will he cause more problems? I'm not sure, but if problems persist the Vikings may have an important decision to make.

It was a terrible showing in week one by the Vikings on Sunday afternoon at Ford Field and quiet frankly it was a collaborative effort. If this team can't reestablish themselves by next week when they travel to Solider Field to take on the Bears, they could be in for a uphill climb. Getting into an 0-2 hole in the division and overall standings, would be a tough way to begin this season, let alone a pretty steep hill to climb.

If the Vikings don't learn from this loss quickly they could finish with two pivotal losses that could dictate the entire 2013 campaign.
Posted by Daniel House at 6:04 PM