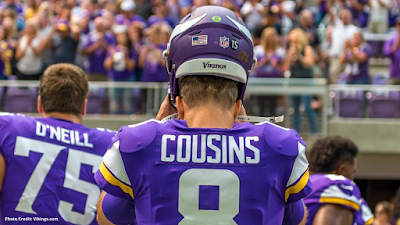 What did we learn from Monday's first wave of offseason moves? Daniel House unpacks the specifics and analyzes what is ahead for the Vikings in free agency.


The Vikings kicked off their offseason by extending key contributors and retaining free agents. Minnesota extended quarterback Kirk Cousins and created $10 million in cap space. Shortly after making this move, the Vikings franchise tagged safety Anthony Harris. The decision to tag Harris was announced right before the deadline expired. It is clear the coaching staff values Harris, but additional signings or trades may be on the horizon.

What did we learn from the Vikings' first wave of moves?

Kirk Cousins is part of the team's future plans

Quarterback Kirk Cousins agreed to a two-year extension worth $66 million, including $61 million guaranteed at signing, according to NFL Network's Ian Rapoport. In 2020, Cousins was set to enter the final season of a three-year, fully guaranteed contract. The new extension shifts his 2020 base salary from $29.5 million to $10 million. As a result, the team created $10 million in cap space, according to multiple reports.

Essentially, Cousins received $31 million in newly guaranteed money at signing. He had $30 million in remaining guarantees on his previous contract, but this money was converted into a signing bonus, according to Spotrac.

There are two important distinctions to make regarding this new contract. First, ESPN's Courtney Cronin is reporting Cousins' new extension doesn't include a no-trade clause. This was previously included in his first fully-guaranteed contract. However, for example, if Minnesota wants to trade Cousins in 2022, a team would need to take on the large cap hit and possibly re-work his deal.

More importantly, one of the key distinctions in this deal is how Cousins' extension becomes fully guaranteed on the third league day of 2021, according to Cronin. With this in mind, the contract is essentially guaranteed. The construction of Cousins' deal signals the team could possibly re-tool his contract again in 2021 or 2022. With the salary cap likely increasing each year, the Vikings wanted to create 2020 cap space, while pushing higher cap hits into the future. One will notice these trends by analyzing the breakdown of Cousins' cap hits from Spotrac's website:

By making this move, the Vikings created space and committed to stability at the quarterback position. Cousins' extension also allowed the Vikings to apply the franchise tag to safety Anthony Harris.

I don't think many people anticipated Minnesota would tag Harris. However, after reaching a deal with Cousins, the team had enough space to make the move. The tag price for Harris is around $11.4 million, according to Albert Breer. This overall number is probably less than he would have received on the open market. When a team signs a player to the franchise tag, his figure immediately counts against the cap. Therefore, Harris' current 2020 cap hit is $11.441 million. The Vikings now control his rights and can determine the next step. After making this decision, the front office has a few different options.

First, Harris' cap hit could be modified through a long-term extension. A new deal may spread out cap hits to future seasons, while giving the Vikings even more flexibility in 2020. The decision to franchise Harris is buying the organization additional time to assess the market.

If this isn't an option, the front office could trade Harris or safety Harrison Smith. Minnesota could also approach Smith about a possible contract restructure. The Vikings are currently committing $22.2 million in cap space to their two safeties. It doesn't seem like this is the team's ultimate plan. I would guess Smith restructures his deal and Harris eventually agrees to a long-term extension.

Nonetheless, the last-minute decision to tag Harris leaves the team will several different options. There's no doubting how much head coach Mike Zimmer values Harris' instincts, coverage skills and versatility. With potential uncertainty at the cornerback position, maintaining continuity in the backend may be extra important.

The Vikings frequently mixed up personnel groupings in 2019. Based upon the team's frequent usage of tight ends and fullbacks, C.J. Ham's role increased. Minnesota spent 45 percent of its total offensive snaps in 21 or 22 personnel, according to Sharp Football. Ham consistently assisted the team's zone blocking scheme and became a key run blocker. He also flashed his versatility and leaked into the flat via the team's play-action passing attack. Within offensive coordinator Gary Kubiak's system, Ham will continue to play a very critical role. He was a restricted free agent this year, but the Vikings wanted to lock him down now. The Vikings' fullback agreed to a new contract that's worth $12.25 million over the next four seasons, according to Ian Rapoport. When analyzing this closer, his dead cap hits will decrease each year, per Spotrac's data:

Ham's $3 million average salary makes him the third highest-paid fullback in the NFL. At his position, he slots in behind San Francisco's Kyle Juszczyk ($5.25 million) and Baltimore's Patrick Ricard ($3.65 million). With the Vikings' commitment to utilizing a fullback in the offensive system, extending Ham was very important.

Right before the season, punter Britton Colquitt was one of the Vikings' best additions. He did an excellent job of flipping fields and dropping punts inside the 20-yard-line. Not only that, but Colquitt's holding skills improved the field goal operation. For most of training camp, special teams coordinator Marwan Maalouf tried to find the right holder. Until Colquitt was signed, the team dealt with inconsistency. It is clear the Vikings are prioritizing stability and consistency at the specialist positions. On Monday, Colquitt agreed to a three-year, $9 million extension that included $5 million in guaranteed money, according to Adam Schefter.

In order to maintain continuity, the next step is to reach an agreement with kicker Dan Bailey. Last year, Bailey was very consistent and made 93.1 percent of his field goal attempts. There is no doubt Minnesota needs to keep the Colquitt-Bailey duo together.

The Vikings also placed a second-round tender on linebacker Eric Wilson. This move increases his base salary to $3.259 million in 2020. Last year, Wilson became a key depth player and started six games when injuries hit the linebacker room. More importantly, he is a core special teams contributor across units.

After making all of Monday's moves, the Vikings now have $8,412,390 in available cap space, according to Spotrac. The team's next moves will be dictated by how Harris' future contract is handled. Additionally, potential contract restructures and roster moves will determine the team's overall available cap space. Minnesota must also decide whether veterans Everson Griffen and Linval Joseph can return on new deals. After that, cornerback Mackensie Alexander and kicker Dan Bailey could be the Vikings' top priorities. The team may need to free up space in order to make Alexander's signing a reality. After the Giants signed former Panthers cornerback James Bradberry to a three-year, $45 million deal ($32 million guaranteed), Alexander's asking price increased. Not to mention, depth options like tackle Rashod Hill, safety Andrew Sendejo and quarterback Sean Mannion could be approached about returning.

The Vikings' upcoming decisions will determine how aggressive they can be in this free agency cycle. For right now, the front office is focusing on retaining its own talent and contributors.