An Early Look at the Vikings' Key Offseason Decisions

The Vikings are entering an offseason filled with new challenges. Daniel House looks at how Minnesota's front office might manage its personnel.

The main question is: what does the future look like?

When Cousins signed an $84 million contract in 2018, he was viewed as the quarterback who could take this organization to new heights. Two seasons later, the Vikings are staring down an offseason that will define the team's future. Cousins is entering the final year of his deal and the front office must determine whether he's part of their future vision. Not only that, but 19 players, including seven starters are set to hit free agency. All of this is complicated by the fact Minnesota is currently $11.4 million (at a projected $201 million cap) over the 2020 salary cap, per Over the Cap's data. With that in mind, after factoring in draft pick financial allocations, the Vikings need to free up roughly $14.4 million.

The front office must decide which veterans are part of the team’s future vision. Some players will be approached about restructuring their contacts. Others will be released in favor of young players and much-needed cap space.

In the past, Minnesota has built its roster through quality draft classes and free agent acquisitions. The personnel department added talent and coaches rapidly developed young players. After a run to the NFC Championship game in 2017, the Vikings believed they were only a few pieces away from reaching their ultimate goal — a Super Bowl.

Despite making key acquisitions each year, including Cousins, the Vikings haven’t jumped over the barrier. Strong salary cap management has allowed Minnesota to keep its main core group of players together. Now, this offseason, it’s clear several difficult decisions will define the next five years.

Before the Vikings embark on an important offseason, which questions should we be considering?

Where does Kirk Cousins’ contract fit into the equation?

The next couple seasons will be defined by how the Vikings approach Cousins’ future. As he enters the final year of his contract, the team must decide whether Cousins is part of their plans. If he is indeed included in Minnesota's vision, the team should extend him this offseason. An extension would free up 2020 cap space, while providing financial resources to retain other key free agents.

However, the front office must also determine whether drafting a young quarterback may create more long-term flexibility. The Vikings could choose to select a quarterback and allow him to develop behind Cousins for one season. By taking this path, the team would free up future money and allocate resources to other portions of the roster. After next season, if the coaches aren’t ready to rely upon a young quarterback, Cousins could still be extended. Nonetheless, an extension for Cousins feels like the most likely outcome. Extending Cousins would free up cap space, provide stability and allow the personnel staff to retain other 2020 free agents. At the end of the day, even if Cousins is extended, don’t be surprised if the Vikings draft a quarterback.

Which current free agents will be re-signed?

In 2020, the Vikings have seven starters hitting free agency. When considering Minnesota’s need for cap space, the team may part ways with at least two of those players. After reaching necessary 2019 contract parameters (56% of defensive snaps and six-plus sacks in 2019), defensive end Everson Griffen’s deal is set to void in May. Even though it seems unlikely he would consider it, the Vikings could gauge Griffen’s interest regarding a restructure. If he is released, Minnesota clears around $13.9 million in cap room, according to Over the Cap. This is precious space the Vikings need to create.

Not only that, but releasing cornerback Xavier Rhodes would free up $8.1 million in space. If the team decides to part ways with left tackle Riley Reiff ($8.8 million) and defensive tackle Linval Joseph ($10.4 million) they would clear a combined $19.2 million. Overall, releasing Griffen, Rhodes, Reiff and Joseph opens roughly $40 million in total space. During this scenario, when subtracting the estimated $14.4 million to get under the cap (includes draft allocation), $25.6 million would be available for spending.

Within the above list, the Vikings may try to restructure Reiff and Joseph’s contracts. By doing this, Minnesota could free up cap space and allow both players to return. If this occurs, Griffen almost certainly becomes a cap casualty. When roughly crunching numbers (and other scenarios) in the Over the Cap system, a Cousins extension is likely necessary to keep Reiff and Joseph on new deals. The team could also approach safety Harrison Smith or defensive end Danielle Hunter about converting a portion of their salaries into signing bonuses.

Cornerback Trae Waynes is also a free agent and should garner heavy interest. Based upon past trends, Waynes will be an expensive player to re-sign on the open market. He could command money in the neighborhood of $9 million per year. If the Vikings decide to retain a free agent cornerback, Mackensie Alexander may be the choice. He is more affordable and can play inside or on the boundary (if needed). Minnesota could likely re-sign him by committing around $7 million per year. If the Vikings decide to let Alexander and Waynes walk in free agency, Mike Hughes, Holton Hill, Kris Boyd and one other addition (draft or free agency) would be asked to step up.

At the specialist positions, the Vikings will do whatever they can to re-sign punter Britton Colquitt and kicker Dan Bailey. Despite joining the team in September, Colquitt flipped fields and was extremely efficient in 2019. He also played a big role in solidifying the holding of field goals. Bailey made 93 percent (27-for-29) of his field goal attempts and kicked with improved accuracy. The Vikings need to maintain stability on special teams, so signing Colquitt and Bailey should be a priority. Also, Minnesota will likely extend fullback C.J. Ham (restricted free agent) instead of offering him a restricted free agency tender. In addition, the team must consider extending depth players like linebacker Eric Wilson, defensive end Stephen Weatherly, safety Andrew Sendejo and reserve offensive tackle Rashod Hill.

If the Vikings want to re-sign safety Anthony Harris, the market will hover around $14 million per year. After leading the NFL in interceptions (six), Harris’ value skyrocketed. If the front office extends Harris, the contract may be back loaded to help salary cap hits in 2020 and 2021. The big question is: will the front office value the safety position enough to keep both Harris and Harrison Smith at high salaries? After watching Harris play at such a high level this season, I think Minnesota will do whatever it takes to extend him. When evaluating the current cap situation and roster construction, it’s clear the Vikings need to decide whether it’s best to retain current players or dip into free agency for other needs.

What is the next step for the offensive line?

If Minnesota wants to solidify the interior of its offensive line, New England Patriots free agent Joe Thuney should be a target. He worked within a gap blocking scheme (occasionally mixed in zone concepts) in New England and is very athletic. When looking at his testing metrics, he ranked in the 98th percentile of the 40-yard dash (4.95 seconds). Here’s a look at his impressive testing chart, according to MockDraftable: 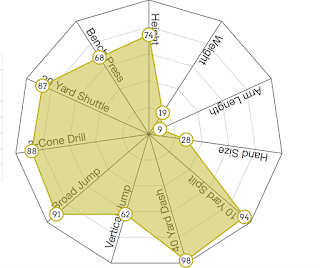 Over the past four seasons, Thuney started every game at left guard and would fit well within the Vikings’ zone blocking scheme. He is represented by the same agency as quarterback Kirk Cousins, so there is a small tie to the Vikings. When looking at past trends, he could command around $11 million per season. If Minnesota wants to sign an offensive lineman like Thuney, it may need to part ways with current free agents like Mackensie Alexander or Trae Waynes. Also, a trade or veteran cap casualty (Linval Joseph/Riley Reiff) could free up necessary room.

Which positions could be a priority in the first round?

If the Vikings decide to sign an offensive lineman and focus on retaining their own players, defensive tackle will become a top priority. Minnesota needs to add a talented 3-technique in this draft cycle. In my Senior Bowl preview and analysis piece, I pulled out a few candidates. The key is to find a versatile interior defensive tackle that can threaten opponents as a pass rusher and run defender. Due to his versatility, Oklahoma defensive tackle Neville Gallimore may be a strong candidate in the first round. Last year, the Vikings’ rush defense was very inconsistent. If Minnesota can find a way to limit early down rushing success, its unit thrives in long down-and-distance situations.

During future offseason posts, I will be analyzing all of this in detail, including how NFL Draft strategies fit within these possible paths.