A Closer Look: How Young is the Vikings' Roster? 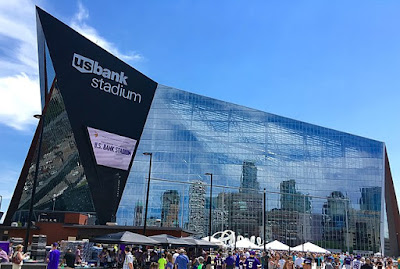 Full 90-man rosters are starting to take shape across the NFL, but where do the Vikings fall into the equation? Daniel House analyzed the data to see league-wide trends.


During a long and exhausting NFL season, teams with the deepest rosters can endure a laundry list of injuries. With that in mind, teams try to form a roster which features an adequate blend of youth and veterans.

In Minnesota, drafting and retaining talent has become a key philosophy for building a competitive roster. Despite adding quarterback Kirk Cousins in free agency last season, the Vikings have managed to maneuver the salary cap through creative contract structures. They have moved higher cap hits to future seasons, which has provided immediate cap relief. The front office understands there will be instances where certain veteran players eventually become cap casualties. Quarterback Kirk Cousins has only two years remaining on his fully guaranteed deal and aging left tackle Riley Reiff may be playing his final season in Minnesota. Roster decisions with both of those players, along with a veteran like defensive end Everson Griffen, give the Vikings clear options to move money over the next couple seasons. Not to mention, the salary cap is expected to increase in future seasons.

With this type of cap management, the Vikings have kept their main core together. In addition to retaining players, they have also strongly injected the roster with rookies and undrafted signings. This is an area the front office has cleared valued to create competition at all layers of the roster. It’s helped them form a young nucleus, which is scattered with veterans. For example, defensive end Danielle Hunter is only 24 years old and is already entering his fifth season in purple. Minnesota has drafted young players and developed many of them at a rapid rate, especially on defense. They’ve also managed to create a culture where players are willing to take less money to remain with the organization. This offseason, linebacker Anthony Barr turned down additional money from the Jets and tight end Kyle Rudolph mentioned the Vikings' current environment as was one of the reasons why he decided to sign a four-year, $36 million extension on Tuesday.

In the spring months, Minnesota had to continue adding youth to depth spots. It helped them withstand salary constraints associated with a quarterback that accounts for more than 15 percent of the team’s total cap space. While maintaining a veteran presence at all levels of the defense, Minnesota added youth on the offensive line to bolster overall production. First-round draft pick Garrett Bradbury joins Pat Elflein and Brian O’Neill to create a young core in the trenches. The Vikings’ front office also spent two late-round draft picks on wide receivers and defensive backs to improve depth and areas of weakness.

With the season quickly approaching and mini camp coming to a close, 90-man rosters are starting to take shape in the NFL. Of course, rosters will evolve significantly over the next couple months, but an early glance at the statistics show the Vikings have one of the youngest rosters in the NFL. After sifting through Pro Football Reference charts and adding the available rookie data, I ran several graphs to illustrate where the Vikings rank among their peers in the NFL. Minnesota currently has the third-youngest roster in the NFL (25.13 years old). They also rank second among NFC teams, trailing only the Los Angeles Rams. As you will notice in the graph below, the ages are rather clustered.
(Note: hover to see the specfic data points for each team - Pro Football Reference uses in-season ages in their age calculations).


The average age of NFC teams is 25.69 years old and most teams fall within this range. However, the NFC South sports the oldest division in the NFL with a 26.04 average. Through a Vikings lens, the NFC North is the youngest division in the NFC and ranks third in the league. All of the average trends are similar in the AFC and rosters will likely start to separate a little following August roster cuts.

The Vikings stack up second among their conference and three of the four NFC North teams are in the top-five among youngest NFC rosters. When factoring in the age of players during the season, Los Angeles holds the top spot. If ages were being analyzed at the current moment, Minnesota would hold the top spot in the league with a 24.68 average. Instead, I chose to use Pro Football Reference's data, which uses the ages of each players during the season. Most of the teams are relatively close in terms of age, but we can see the NFC South is going to be the veteran division. The ages of quarterbacks Drew Brees and Matt Ryan slightly increase the overall average age for the Saints and Falcons.

I also took the data and displayed it across the entire league for readers to visualize the trends for each team in a simplified manner. With dynamic teams like the Chiefs and Rams sporting young quarterbacks, they have lower averages and additional financial resources to add necessary pieces on each side of the ball. It's also interesting to notice youth in the AFC North, which now holds the youngest average division age in the NFL. I want to revisit the data following roster cuts, and after the season, to determine if there is a strong correlation between youth/veteran rosters and overall success. After looking at last year's data, most teams fall in the middle of the age curve when analyzing the correlation between youth and overall team success. For example, eight 2018 playoff teams fell between No. 9 and 25 on the preseason youth rankings. Of course, there are outliers, such as the Rams and Cowboys, who both held two of the top-five youngest rosters in the league last season.

When taking a look at this season's data before roster cuts, you'll notice how the distributions are rather even in both the NFC East and NFC North. The NFC South holds older rosters, and it's easy to tell the Bucs are currently in a re-build, while the other teams are clearly "all-in" to create success. Two of those teams also have older quarterbacks, which gives them additional veteran experience. 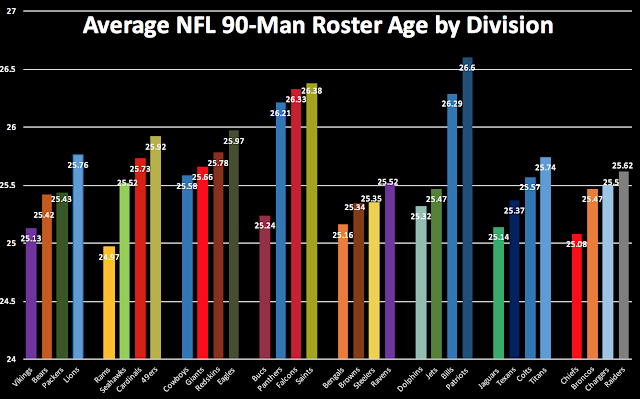 When you break down the data even further into specific teams, you'll notice the position groups front office staffs have recently invested the most resources into. For example, I took the position groups in the NFC North and looked at the trends associated with each phase of their personnel structures. As you will notice, the Vikings are the youngest NFC North team at every offensive position, except tight end. This offseason, Detroit drafted Iowa star TJ Hockenson and signed former Steelers tight end, Jesse James. In Chicago, outside of Trey Burton, the Bears have a strong youth presence at tight end. Minnesota also drafted Alabama tight end Irv Smith Jr. in the second-round and Green Bay spent a third-round selection on Texas A&M pass-catcher, Jace Sternberger. It's easy to see this was a position division squads wanted to improve this offseason. Teams continue to run a heavy amount of hybrid 12 personnel packages with mismatch tight ends. The NFC North clearly wanted to join the party this year.

With the Vikings spending so many offseason resources on the offense, including their first four draft picks, Minnesota quickly became the youngest NFC North team on this side of the ball. Third-round pick Alexander Mattison is one of the youngest players in the league and joins Dalvin Cook and Mike Boone to create the youngest running back group in the NFC North. Minnesota also spent three draft picks on offensive linemen, which complements the draft resources already invested into the position over the past three cycles. The Packers and Vikings hold the youth advantage over Chicago and Detroit offensively, but the margin is very close. 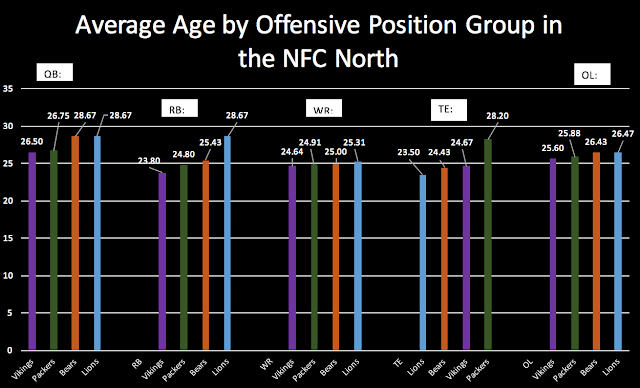 When shifting to defense, the Vikings still hold the youngest defensive line group in the division, but it's only by a slight margin, after Detroit signed 25-year-old pass rusher Trey Flowers. The former Patriots edge rusher joined a unit already filled with youth. It's actually very interesting to see younger defensive line units in the NFC North. Teams know they have to inject youth at this position and find ways to get after the quarterback. It not only helps a team control the game, but puts less strain on secondaries often filled with inexperience. Each team in the division has extremely strong defensive line groups, including Khalil Mack, Mike Daniels, Trey Flowers and Akiem Hicks. This, as always, means offensive line play is going to be a huge difference-maker in the NFC North. All of the teams are on the younger side of the equation at linebacker, but the Vikings have the oldest average in this category. Minnesota is hoping a young contributor like Ben Gedeon or rookie Cameron Smith can make an impact when the team shifts into the base package.

At cornerback, the Vikings' depth chart is filled with three 22-year-old players, including Mike Hughes, Holton Hill and Texas draft pick Kris Boyd. This is a strong young core to build upon, but Green Bay surprisingly holds the youngest group in the NFC North. This is slightly deceptive and could be flipped if Tramon Williams is considered a cornerback. I included him at safety, but he probably could fall into either category. This just shows how much Green Bay had to improve the secondary after historically bad performances in the 2017 season. They recently spent high draft picks on Jaire Alexander, Kevin King and Josh Jackson in an attempt to improve the position group. In a league filled with a high volume of passing, the NFC North has continued to invest resources into creating secondaries filled with youth and blossoming talent.

As we await regular football activities in training camp, looking at age is an entertaining exercise. The numbers will likely shift a little after roster cuts and last-second signings, but we have a clear idea of how the distributions stand before battles intensify. Within a relatively young NFC North, the battle should be rather competitive for seasons to come, especially while Aaron Rodgers is still slinging it for the Packers.

A closer look at numbers and player profiles show the Vikings have a blend of veterans and youth throughout the roster. With the current contract situations they face, Minnesota's depth spots are continuing to get younger to accommodate other large financial outputs. The Vikings will need to keep developing and elevating players at depth positions to maintain a deep roster. This will help them continue to follow the "draft and retain" philosophy that has helped them develop stability. No matter how you look at it, the cap work by Anne Doepner and Rob Brzezinski has kept Minnesota's young core together. Now, it's almost time to see if they finally have all the ingredients needed to make a championship run.