Vikings select Texas CB Kris Boyd in the seventh round

It took until the seventh round, but Mike Zimmer finally got his true cornerback. Daniel House has all of the details regarding the selection of Texas cornerback Kris Boyd.

It took until the seventh round, but Mike Zimmer finally got his true cornerback. The Vikings used pick No. 217 on Texas defensive back Kris Boyd. This was a strong value pick for Minnesota in the late rounds. Among many of the experts, Kris Boyd had fourth-round grades. His inconsistent coverage skills may have played a role in the slide.

Boyd posted 67 tackles, an interception and 16 pass breakups during his senior season at Texas. He is a very physical tackler and is the type of cornerback that defensive backs coach Jerry Gray and head coach Mike Zimmer can develop. He struggled in coverage and posted inconsistent grades on Pro Football Focus.

Athletically, he has tremendous strength and posted 19 bench press reps, which led all defensive backs at the NFL Scouting Combine. Boyd can definitely use this to his advantage against more physical wide receivers. He tests very well in the quickness measures, especially for a defensive with his size and strength. Boyd’s spider chart shows the unique blend of physical strength and quickness: 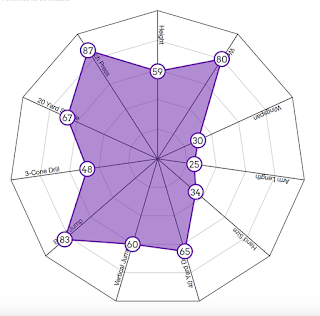 He is a converted running back and posted 75 touchdowns in high school at the position. Boyd certainly possesses the traits if he can develop all of the technique. Being selected by Minnesota places him an environment where he could maximize his potential.

His cousin Bobby Taylor was a defensive back at Notre Dame and earned All-Pro honors with the Philadelphia Eagles. Boyd joins former teammate Holton Hill as the second Longhorns defensive back Minnesota has added in the past two seasons.
Posted by Daniel House at 4:54 PM