An Early Look: How could the Vikings approach this offseason? 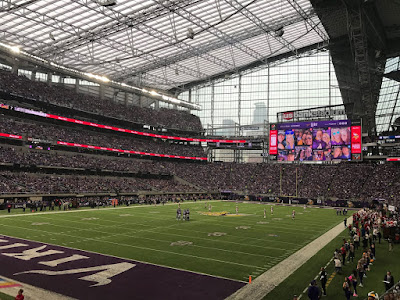 Daniel House presents some scenarios where the Vikings could free up cap space to make necessary signings. Take a look at his initial thoughts as we enter the offseason!

With the offseason officially underway, the Vikings will now enter a very important phase of the team’s future. The decision to invest a large sum of money into Kirk Cousins last March, means they’ll likely approach the next few months much differently than normal. According to Over the Cap, Minnesota currently has just $6.9 million of available cap space. If the salary cap increases (it will), this number could hover around $11 million. In addition, the Vikings will need to allocate money to re-sign current free agents. With some realistic restructuring and cuts, they could probably get the cap number into the $25 million range.

Based upon the current structure, the Vikings’ front office will likely need to prioritize re-signing linebacker Anthony Barr or defensive tackle Sheldon Richardson. This is contingent upon how many contracts they restructure or move and the weight they place upon fixing other areas of the roster in free agency. It would take some heavy maneuvering to find room for both of them, while still making upgrades at other portions of the depth chart. How the team approaches these contracts is likely going to influence the entire free agency and draft process. In order to get cap relief, the Vikings will be approaching players to restructure contracts.

A few names come to mind as the front office looks to trim money. Defensive end Everson Griffen currently has the fifth-highest cap hit ($11.9 million) among current players on the roster. The Vikings will likely try to restructure the 31-year-old defensive lineman’s deal. This could be done by converting some of his contract into bonuses to lower his overall cap hit. Future posts will be diving into the potential strategy in deeper detail. There is a realistic scenario where the team could trim his cap number down to roughly $7 million by stretching out money on his contract and converting some of it to signing bonuses. If they simply released Griffen before June 1st and promoted Stephen Weatherly into a starting role, they would save roughly $11.5 million in cap space.

Another player to consider restructuring is Kyle Rudolph ($7.6 million hit). Rudolph feels like a strong candidate, especially considering the team could draft a future tight end in this year’s draft. In his situation, they could also convert some of his contract into bonuses to clear space. If they decided to release him, he also features no dead money in 2019. If they decided to cut Rudolph, they would save $7.6 million in cap.

Outside of those two names, the team will likely part ways with safety Andrew Sendejo, who played in just five games due to a groin injury. With Anthony Harris’ strong showing in 2018, the team will probably place a second round tender on him or reach an extension. Harris started nine games in 2018, posting 45 tackles, six pass breakups and three interceptions. He clearly benefited from a full offseason in the weight room and added a physical dimension to his skill set. Releasing Sendejo would free up $5.5 million in cap space. In addition to that, the team could try to acquire a draft selection for guard/tackle Mike Remmers or release him. He didn’t perform nearly as well at the guard spot, and if he does return, the team should consider moving him back to tackle.

Even with that in mind, the Vikings probably could find an upgrade in the draft. Making a move with Remmers would free up roughly $4.5 million and includes $600,000 in dead money if he is cut by June 1st. All of the decision-making that will occur on the offensive line is dependent upon how they want to approach free agency and the draft.

The team could also try to create some cap by re-working Danielle Hunter, Linval Joseph, or Stefon Diggs' contracts, too. It would depend upon whether each of them would be willing to make some adjustments to free up space. They could add a year to their contracts and spread out the money even more. This would line up well when considering the salary cap will continue to increase over time. My point: it’s going to take some maneuvering and creativity to get cap relief. That’s where Rob Brzezinski and Anne Doepner enter the picture to adjust the current structure.

There were some reports this week that the Vikings could consider moving left tackle Riley Reiff to guard. With his size and movement skills, this seems like a more natural transition than Mike Remmers faced last year. However, the team may benefit from considering another switch.

Entering the league, center Pat Elflein actually had more experience playing guard at Ohio State. As a sophomore and junior for the Buckeyes, he started 25 games at right guard and three on the left side. He didn’t make the switch to center until his senior season, but managed to win the Rimington Award for the nation’s top center. Elflein’s rookie season was strong, but he spent most of the year working his way back from offseason shoulder and ankle surgeries. This had to play a role in some of his issues holding up against power this year. Some of it was simply due to difficult matchups like Fletcher Cox, Aaron Donald, Akiem Hicks and many others. With the league-wide talent inside, centers are getting difficult matchups nearly every week.

If they did move Elflein to center, they could draft a center in the second or third round. NC State product Garrett Bradbury has been gaining momentum and could be picked in the first round. His movement skills, agility and ability to get into the second level fit what the Vikings will be asking for in the zone-blocking scheme. They could essentially move Elflein to left guard, keep Riley Reiff at left tackle and address the center and guard positions in the draft or free agency. If they do this, they could take the best player available in the first round or choose another versatile offensive lineman like Kansas State’s Dalton Risner.

Boston College’s Chris Lindstrom is moving up draft boards, but could be an option for the Vikings, too. In the event those players are gone, the draft features some quality interior linemen to consider, such as mid-round options Mississippi State center/guard Elgton Jenkins or Wisconsin product Beau Benzschawel. My point: it’s early and really hard to project draft values at this point. What we do know is the interior offensive line depth is encouraging and could give the Vikings some flexibility in the draft/free agency.

If they took the free agency route, they could sign a player very familiar with new Assistant Head Coach/Offensive Advisor Gary Kubiak. Matt Paradis has started 57 games at center for the Broncos and worked with Kubiak for two seasons in Denver. He fits the zone blocking scheme, would be experienced and is just 29 years old. More importantly, they likely could sign him to an affordable contract. He will likely command a deal in the $8-9 million per year range. Paradis did suffer a fibula fracture in November and his medicals would need to check out. If they do, it could help the Vikings land him at a discounted rate (likely lower than the figure above).

So, in theory, the starting offensive line in this scenario would be (L-R): Riley Reiff, Pat Elflein, Matt Paradis, Dalton Risner (or other option) and Brian O'Neill.

Note: this is a situation that would involve some serious restructuring and tough cuts/trades (ones discussed at the top), but it’s worth considering, especially if the team doesn’t re-sign Barr. One other wrinkle to consider for this scenario: if the team doesn’t have interest in resigning cornerback Trae Waynes next year, they could attempt to trade him and clear $9 million in space. Holton Hill and Mackensie Alexander are developing, Mike Hughes is returning and Mike Zimmer/Jerry Gray have shown ability to develop young cornerbacks. It’s just another thing to consider. They could potentially receive a second or third round pick in exchange for Waynes.

When it comes to Barr, I’m expecting a reasonable deal for both parties would be in the four-year, $60-65 million range. If they can’t agree on a number, the team could re-sign Sheldon Richardson and target Paradis. In the event the numbers don’t line up, they could prioritize Paradis and sign a veteran wide receiver. If that happens, Barr and Richardson would be hitting free agency.

In terms of interior depth on the offensive line, Cornelius Edison gained valuable reps at center in training camp and the preseason. If he adds more strength this offseason, he could suddenly become a legitimate reserve option. The team also traded for Brett Jones before last season and may consider re-signing him to serve as a backup at both the guard and center spots. Tom Compton could return as well and has versatility to play either guard or tackle. The other scenario that must be factored into the equation is how guard/center Nick Easton recovers from a bulging disk in his neck. It’s unclear if he’ll return, but that certainly plays a role in how the team may consider shuffling the offensive line.

As the offseason kicks off, it’s worth starting to throw these ideas around. Again -- I want to emphasize -- many of my hypothetical scenarios revolve around how many contracts they can restructure. This will an offseason where the Vikings must be more creative than ever with their spending. I’ll be detailing how some of this could work in future posts, but for now, these are some initial thoughts to consider before we enter the NFL Scouting Combine.