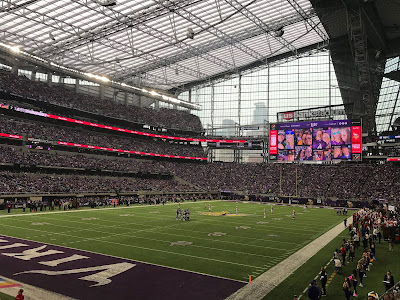 The Vikings used a strong defensive performance and a big day on the ground to fend off the Arizona Cardinals for a 27-17 win. Daniel House takes you inside his notebook for analysis.


It was clear the Vikings wanted to confuse Arizona rookie quarterback Josh Rosen. They sent exotic packages the entire day to keep the young passer on his heels. After allowing Bills rookie Josh Allen to pick them apart two weeks ago, Minnesota schemed to make sure Rosen wasn’t comfortable.

Despite a slow start offensively, the Minnesota defense managed to sack Rosen four times to hold Arizona’s offense in check. Running back Latavius Murray rushed for 155 yards and a touchdown as the Vikings surged past the Cardinals for a 27-17 win.

Vikings’ scheme helps keep Rosen uncomfortable
The Vikings’ use of pressure packages on third down was a key part of their success. They deployed zone blitzes, rushed linebacker Anthony Barr off the edge, sent nickel blitzes and moved safeties around the line of scrimmage. At one point, the Vikings ran a zone blitz, dropping defensive end Stephen Weatherly into coverage and sending safety Harrison Smith off the other side. Smith quickly found Josh Rosen in the backfield for a sack, ending the Arizona drive. Minnesota sacked Rosen four times, forcing him to get the ball out quickly. Defensive end Danielle Hunter extended his sack streak to six games as he met Rosen in the backfield twice. Hunter has been the Vikings’ most consistent defensive player to open the season. With Everson Griffen out, he has elevated his play and helped the Vikings’ defensive line create pressure on opposing quarterbacks. Minnesota kept the pocket uncomfortable for Josh Rosen and created two takeaways, including an interception by Anthony Harris.

Harris rotated into the starting safety role with free agent signing George Iloka. The decision to mix Harris and Iloka into the defense allowed the Vikings to use two different player profiles in the backend. Harris is a sound player in coverage, while Iloka is a more physical safety who can slide up into the box. With Andrew Sendejo out, the Vikings heavily rotated the personnel in the secondary to keep players fresh. They followed a similar strategy on the defensive line as Jalyn Holmes and Tom Johnson mixed into the unit. Minnesota’s scheme allowed them to control the line of scrimmage and minimize big plays. The Vikings also held David Johnson to just 55 yards on 18 carries, which allowed them to be more aggressive in long down situations.

Cornerback Mike Hughes left the game late in the fourth quarter with a knee injury. It is unclear the severity, but he was down on the field and walked off slowly with assistance. NFL Network’s Ian Rapoport is reporting the Vikings fear he suffered a torn ACL. He will undergo an MRI tomorrow, according to the report. Another injury in the secondary would be tough for the Vikings as the unit was just starting to get healthy again.

Offensive line struggles to handle Chandler Jones
The offense started slow as the offensive line struggled to protect quarterback Kirk Cousins. Left tackle Rashod Hill couldn’t handle Arizona edge rusher Chandler Jones and was beaten for a strip sack in the second quarter. Safety Budda Baker recovered the fumble and reached the end zone for a 36-yard touchdown. Cousins was sacked four times and hit on seven occasions as he tried to find room in the pocket. Again, many of Cousins’ most brilliant throws were under pressure. He connected with wide receiver Adam Thielen for a key first down on third-and-13. Thielen made a remarkable diving grab near the sideline as Cousins dealt with pressure in the pocket. Cousins found Thielen three times on the drive, including a 13-yard touchdown throw where he drove the pass up the seam. Thielen had 11 catches for 123 yards and a touchdown, extending his 100-yard receiving streak to six games.

The Vikings’ offensive line did just enough to win, but the help of tight end David Morgan on the edge was keeping Chandler Jones from taking the game over. There were also moments where Cousins held onto the ball too long or didn’t feel pressure adequately. Between those lapses and the inconsistent protection, Arizona managed to remain within striking distance.

Running game shows signs of life
The big key for the Vikings was finding an identity on the the ground. Entering the game, they had yet to tally a rushing touchdown. This changed early as Latavius Murray ferociously stiff-armed a defender for a 21-yard score. Murray was picking up extensive yards after contact as he accumulated 14 carries for 155 yards and a touchdown. Collectively, the Vikings rushed for 195 yards and averaged 6.1 yards per carry. Tight end David Morgan helped spark several key runs, along with center Pat Elflein and guard Tom Compton, who opened numerous holes. Kirk Cousins also found the end zone for a seven-yard score as the Vikings ran a nifty read-option look. Tight end Kyle Rudolph held a key block on the edge as Cousins sold the fake and sprinted into the end zone for an easy score.

Although the offensive line still has inconsistent moments in the running game, they managed to pave the way against the third-worst rush defense in the NFL. This is the type of game the Vikings can use to build confidence as the search for continued offensive balance.
Posted by Daniel House at 4:29 PM