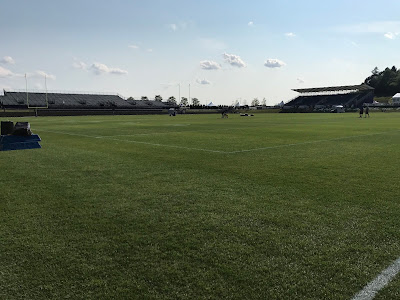 The Vikings continued training camp practices with their first session following an off day on Sunday. Daniel House takes you inside his training camp notebook for more!


The Vikings continued training camp practices after an off day Sunday. Monday's session was a day where the team tested the roster in red zone situations and 1-on-1 battles. As camp progresses, the roster battles will start to progress and a few players may separate themselves from the pack. With a preseason game on Saturday in Denver and joint practices with the Jaguars later next week, it will be even easier to evaluate the roster.

One of the highlights of the day came when quarterback Kirk Cousins found Adam Thielen on a wheel route deep to the sideline. Thielen beat Mike Hughes out of the break and made a very difficult grab in traffic with multiple defenders all over him. A few plays earlier, Thielen was stopped by Hughes, who forced an incompletion. It was fun to watch Hughes and Thielen battle and share in some success. Cousins best throw of the day came on a corner route in the end zone where Thielen made a beautiful tip-toe grab with Mackensie Alexander in tight coverage. The ball was delivered with excellent touch into a tight window for an easy pitch and catch.

Another wide receiver who had a strong afternoon was Cayleb Jones. He made an acrobatic grab over Trae Waynes, who was in tight coverage. Jones is one of the best wide receivers on the team at making contested grabs. He displays excellent body control and has the size to get position against the defensive back. Jones made a similar catch on a deep fade with Craig James playing tight coverage in the red zone. He had one bad concentration drop, which has been a problem in the past. However, he has put together another strong camp and is doing enough to potentially push for the No. 6 receiver spot when he returns from suspension. Jones will miss four games for a performance enhancing drug (PED) violation, but could be stashed on the reserve list until he is eligible for reinstatement.

Running back Dalvin Cook got the crowd going when he burst through the middle and kicked a run outside for a big gain. He was extremely explosive out of the cut and showed off his rare blend of explosiveness and power. It might have been his most impressive run of camp. Cook is looking very comfortable in his return from ACL surgery and has been popping off these type of runs consistently. He also has been active in the passing game and displays the rare blend of all-purpose ability. One of the best moments of practice came in the final red zone drill. Cousins threw a pass to the back of the end zone and Cook couldn’t haul it in. Xavier Rhodes was in coverage and tossed the ball in the direction of the running back while he rested on the ground in dismay. Rhodes laughed and said, “I told you I was coming.” Rhodes and Cook are always joking around and competing throughout practice.

The defensive line is still ahead of the offensive line as the unit tries to work with three players resting various injuries. Mike Remmers and Nick Easton remained sidelined, while Pat Elflein continued working out on the physically unable to perform list. Easton hasn’t practiced since Aug. 3 and Remmers injured his ankle on July 31. With these injuries, Danny Isidora and Tom Compton played at guard with Cornelius Edison at center. In a few of the reps, Edison was rather solid, including a great rep against Jaleel Johnson in a running drill. He got out on the run and sealed the edge for the running back to get free. He also split his 1-on-1 reps and has quietly performed decent in camp. However, the preseason will tell everyone more about whether Edison is actually a viable option. Another lineman who has performed well after receiving additional reps is Aviante Collins. He destroyed Stephen Weatherly in a 1-on-1 drill, knocking him to the ground. Not to mention, he easily controlled Jalyn Holmes, who won his other two reps in the drill. Collins was mauling people in the team drills and showed off a mean streak. He might have been the most impressive linemen on the field during various drills. Collins stood out for his physical playing style at TCU, but this was one of the training camp practices where he really unleashed everything.

On the defensive line, Danielle Hunter slid down the line of scrimmage to make a tough stop in the A-gap. He said he spent plenty of time working on this during the offseason and he has flashed the ability early in camp. Everson Griffen also blew past Tom Compton in the same drill and put a nasty spin move on David Morgan to complete a tackle for loss. In pass rush situations, Jalyn Holmes continued to impress. He strings together two solid reps followed by one which is less impressive. However, he is developing a pass rushing arsenal as he works with the defensive line coaches to improve his moves, rushing stance and hands. The coaches also spent extensive time working with Ifeadi Odenigbo, who is having a strong camp. He is continuing to evolve with his hand technique and you can see flashes of brilliance when he executes at a high level.

The linebackers were blitzing a little more throughout the day and a few players stood out in this drill. Eric Wilson created a notable pressure and Garret Dooley notched a hurry during one of the team drills. Dooley has shown some potential when sent off pressure packages. He was used in this role substantially at Wisconsin because of their scheme. With his first-team role on a few special teams units, Dooley is a name to monitor closely in the preseason.

Wilson is arguably one of the most improved players on the team. He is very rangy in coverage and has paired this with his ability to get downhill as run defender. In the event he is needed, the Vikings might feel more comfortable with expanding his role outside of special teams work.

During a red zone drill, cornerback Xavier Rhodes had a pass breakup in the back corner of the end zone on Stefon Diggs. It wasn’t the only moment in Monday’s practice where Rhodes used his long arms to get into a passing lane. That's expected from one of the top cornerbacks in the game.

In addition to Rhodes, Horace Richardson was in perfect position to create a pass breakup in team drills and Jack Tocho won a jump ball battle against Brandon Zylstra. Richardson has evolved so much technically, but will like fall victim to a numbers game in the secondary. On the other hand, Tocho hasn’t put together a great camp and this was one of his first notable snaps.

The kicker battle continued on Monday as Daniel Carlson and Kai Forbath each received four kicks during a team period. Carlson made 2 of his 4 attempts, missing from 44 and 55 yards out. Forbath finished 3-for-4, but missed his 44-yard try. The battle is tight at the kicker position, according to special teams coordinator Mike Priefer. However, the preseason will provide more clarity.

For a fun feature with safety Anthony Harris regarding his physical growth, follow the link.