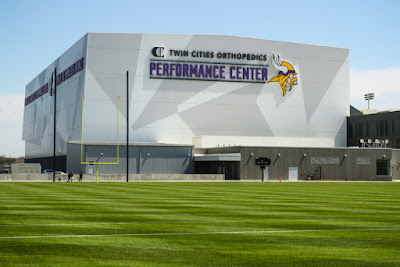 
The Vikings are moving into the second half of the preseason and it's time to start thinking about how the roster could take shape. After watching training camp and two preseason games, here's a "way-too-early" 53-man roster projection.


QB: (3): Kirk Cousins, Trevor Siemian, Kyler Sloter
Analysis: The Vikings were aggressive in free agency as they attempted bolster the quarterback position this season. Front office staff tossed out cash to Kirk Cousins and sent a fifth-round pick to Denver for experienced backup Trevor Siemian. Siemian has started 24 games in the NFL, which provides a sense of veteran experience in the event he is needed. This is important to have, especially when one remembers what happened last season. At the third quarterback spot, Kyle Sloter is a player the team can continuing developing.

A converted wide receiver, Sloter is still mastering all of the mechanics, but clearly has upside in terms of arm talent and athleticism. There have been inconsistences from him in practice (decision-making, release consistency), however, the Vikings need to continue developing him to see if he can elevate into a future option. Also, the team has kept three quarterbacks every year under head coach Mike Zimmer.

RB: (3): Dalvin Cook, Latavius Murray, Mike Boone
Analysis: The top two spots are filled with a one-two punch that could surprise many people this year. Dalvin Cook and Latavius Murray’s rushing styles complement each other well. Murray is also looking more comfortable after spending most of last season recovering from ankle surgery. Outside of those two, the competition to fill the No. 3 running back job has been intensifying. With Jerick McKinnon leaving for a big contract in San Francisco, the Vikings found developmental talent in undrafted free agency. Both Mike Boone and Roc Thomas have stood out in the preseason.

Thomas had a 78-yard receiving touchdown in the first preseason game and flashed his burst and vision as a runner. However, Mike Boone has displayed an ability to create yards after contact and is more polished as a receiver. Overall, Boone has the best body of work dating back to spring OTAs. With it being difficult to keep both of them, the Vikings will try to slide Thomas onto the practice squad. The race can change during the final two games, but after training camp and two games, this feels like the best move.

FB: (1): C.J. Ham
Analysis: C.J. Ham’s versatility makes him an important aspect of what the Vikings do offensively. He is an integral cog when the Vikings deploy 22 personnel to run the football. He has significantly improved as a lead blocker and has blended it with his pass catching ability. Ham filled in at tight end when injuries plagued the group last year. This is valuable and an important aspect of the Minnesota offense.

WR: (5): Stefon Diggs, Adam Thielen, Laquon Treadwell, Brandon Zylstra, Chad Beebe
Analysis: The top-three spots are locks right now, but the picture is less clear outside of that. None of the bottom-tier players on the depth chart have really separated themselves for the final spots. Chad Beebe has been the only wide receiver who has taken advantage of the snaps. He has excellent feet, quickness and starts. He is starting to become more nuanced as a route runner and is getting open consistently out of the slot. Veteran Kendall Wright was showing flashes in practice, but I’m not if it’s enough to keep him around. Beebe is younger and has plenty of potential for the coaches to work with.

The last spot is more complicated. Brandon Zylstra was making a name for himself before missing three practice sessions and two preseason games with a hamstring injury. His role on special teams, combined with his growth as a receiver are probably enough for him to make the roster right now. Tavarres King is a solid vertical playmaker and is slightly more polished as a route runner at this point. However, like Kendall Wright, he doesn’t provide value on special teams. Those factors separate Beebe and Zylstra, especially considering neither of the veterans have flashed. In addition, it’s worth remembering Cayleb Jones will be returning in Week 5, following his performance enhancing drug suspension. With that in mind, this feels like the best way to structure the wide receiver depth chart, unless one of the two veterans flash in the coming weeks.

TE: (3): Kyle Rudolph, David Morgan, Tyler Conklin
Analysis: The tight end position is pretty much set at this point. Kyle Rudolph is one of the top red zone receivers in the league and David Morgan is a fantastic run blocker. Morgan’s value is vastly underrated when you analyze the impact he makes every week. At the third spot, Tyler Conklin is still developing, but is a mismatch tight end who can run routes out of a variety of different positions on the field. He also was showing up more as a run blocker during the most recent preseason game. Blake Bell has been near the top of the special teams depth chart, but it doesn’t make sense for the team to keep four tight ends, especially considering they have three with all of the necessary skills.

OL: (10): Riley Reiff, Tom Compton, Pat Elflein, Mike Remmers, Rashod Hill, Brian O’Neill, Danny Isidora, Cornelius Edison, Aviante Collins, Josh Andrews
Analysis: The offensive line has been the biggest question mark surrounding this team during training camp and the preseason. Pat Elflein, Mike Remmers and Rashod Hill all should be returning soon, which can only help the unit. It’s the depth spots where there are more question marks. Everyone in the back half of this depth chart is young and inexperienced. It means if one veteran goes down, those players will at least need to be serviceable. Brian O’Neill and Danny Isidora are both progressing with additional reps. In addition, Cornelius Edison has been a major surprise and can play both guard and center when called upon. Finally, Aviante Collins put together a strong camp. He was less impressive at tackle in the preseason, but in my eyes, projects more naturally as a guard. I think the team will probably attempt to acquire a swing veteran tackle before or during roster cuts. Josh Andrews likely sticks around until they make that roster move.

DL: (10): Danielle Hunter, Sheldon Richardson, Linval Joseph, Everson Griffen, Brian Robison, Tashawn Bower, Stephen Weatherly, Jaleel Johnson, Ifeadi Odenigbo, Jalyn Holmes
Analysis: I don’t think there’s a deeper position group on the roster. One could argue defensive back is close, but I think the talent is more polished on the defensive line. Outside of the top players, Tashawn Bower and Stephen Weatherly are developing nicely at defensive end. Each of them both have more refined their pass rushing moves and Weatherly has been making a splash as a run defender. Inside, Jaleel Johnson might be the most improved player on the team. He has become stronger via the strength program and is more physical at the point. Johnson has now managed to combine the strength with his above average hand technique. He will play a major role in the Vikings’ defensive line rotation.

Rookie Jalyn Holmes has work to do technically, but is still disruptive because of his length and unique physical traits inside. He is someone defensive line coach Andre Patterson will continue to mold. Finally, I think the Vikings will keep ten defensive linemen due to Ifeadi Odenigbo’s strong performances. He was dominant during training camp because of his his explosiveness, strong hands and position versatility. He can play inside or on the edge at defensive end. This type of flexibility will be enough for him to claim a roster spot.

LB: (5): Anthony Barr, Eric Kendricks, Ben Gedeon, Eric Wilson, Reshard Cliett
Analysis: Entering camp, one of the areas of concern was linebacker depth. There was so much inexperience and unproven ability at the position. After watching practices, Ben Gedeon and Eric Wilson have improved, especially Wilson. He has bulked up and has the sideline-to-sideline range to fit well in the defense. After the top-four, the final spot is less clear. Antwione Williams has the length and blitzing ability to fit the defense, but doesn’t have the range the Vikings usually value in linebackers. Devante Downs still needs to develop and has looked rusty throughout camp and the preseason, as he recovers from a knee injury. He’s probably a practice squad candidate. I’m probably in the minority, but I would award the final to Reshard Cliett. He has the movement skills and physicality to make plays against the run. Cliett has caught me eye in the first two preseason games and can play on special teams until Kentrell Brothers returns. The margin between Downs, Williams and Cliett is small and a few strong preseason games could change my opinion.

CB: (7): Xavier Rhodes, Trae Waynes, Mackensie Alexander, Mike Hughes, Terence Newman, Marcus Sherels, Holton Hill
Analysis: Outside of the defensive line group, cornerback is the one area where the Vikings are extremely strong. Mike Hughes has exceeded expectations and will make an early impact in the secondary. Past youth like Trae Waynes and Mackensie Alexander have progressed as well. One of the main question marks is whether the team keeps six or seven cornerbacks. If they keep seven, Marcus Sherels will make the team. I think this is the most realistic scenario as the team values his reliability as a punt returner. As Mike Hughes adjusts, they’ll probably keep Sherels for one more season.

Holton Hill has so much potential to be a solid NFL player. Right now, he’s trying to master new technique, and when does, the ceiling is extremely high. The Vikings will keep him on the roster to invest in his development as a player. Horace Richardson is on the fringe of making the team and has taken an impressive step forward. He caught my eye last year in training camp and is working with the second-team unit. Due to a numbers game at the positon, the only way Richardson makes the 53-man roster is if the Vikings decide to release Marcus Sherels.

S: (3): Harrison Smith, Andrew Sendejo, Anthony Harris
Analysis: The Vikings can keep three safeties because they have the flexibility to move Terence Newman into the backend if needed. Tray Matthews has also been progressing and can be stashed on the practice squad in the event injuries occur. Anthony Harris has significantly improved and could push for the starting role next year as Andrew Sendejo’s contract features an out. Jayron Kearse is strong on special teams, but has missed time during the preseason. The team must decide how much they value keeping an extra defensive linemen or safety.

K: (3): Daniel Carlson, Ryan Quigley, Kevin McDermott
Analysis: The kicker battle ended after training camp and the first two preseason games. Daniel Carlson has the most potential to upgrade kickoffs, along with deep field goal tries. His big leg leaves an element of possible creativity on kickoffs because he can kick the ball to certain spots others can’t. The new kickoff rule also allows the kicker to challenge return units by kicking the ball to difficult spaces on the field.