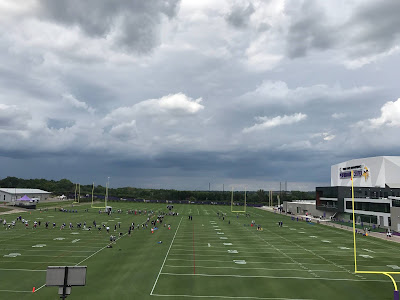 Words can't measure the impact a coach can have. Not only on the lives of his players, but everyone in an organization. The loss of Vikings' offensive line coach Tony Sparano is proof -- there's so much more to life than football. Wednesday marked the start of the season in Minnesota, but a friend, colleague and coach wasn't there. Sparano passed away Sunday at the age of 56.

“It's good to get back out here on the field. It takes a little bit of sting away of losing a great friend, a great coach, a good man," head coach Mike Zimmer said. "Unfortunately I've been through this about eight years ago when I lost my wife, so we're hoping that this is the last time."

Zimmer lost his wife his wife, Vikki, in 2009 -- a tragedy which changed him forever. This is another situation where the head coach must overcome the loss of a someone important to him. The Vikings' coach was very similar to Sparano in many ways, but the personality of the late offensive line coach’s wife, Jeanette, reminds Zimmer of Vikki.

"I told her the other day, she reminds me a lot of my wife," Zimmer said. "She's the sweetest lady ever."

Deep down, that sweet personality rubbed off on the fiery football coach. It’s the side his family and those close to him often saw, including his four grandchildren.

“Tony was such a great coach and a great family man and so strong in his faith,” GM Rick Spielman said. “In his short time here with the Minnesota Vikings, Tony was such a critical part of our success, not only as a football coach, but what he stood for as a man and the values that he gave to us.”

When Sparano was on the field, he took pride in developing his players, something Zimmer noticed. His tireless work ethic, ability to coach young players and his friendship with Zimmer were reasons why he was selected as the offensive line coach in 2016. In a way, his personality and philosophies resembled the Vikings’ head coach. However, Sparano’s teaching approach and coaching mindset balanced with Zimmer well. It's what separated him from other position coaches.

“He was always grumpy. He was a lot like me. He was probably the only grumpier person in the building than I was, but he really cared about his players,” Zimmer said. “I’ve sat in with him in offensive line rooms a lot, and he had a way of poking a stick at the guys and then putting his arms around them.”

Not only could Sparano coach players currently on the roster, but the work he put into finding players in the draft was pivotal to the team’s success, according to GM Rick Spielman.

“He was one of those coaches that I can just tell you from coming in the morning and here late at night, he was so driven to be a successful coach, and so driven to have our football team be successful in his role,” GM Rick Spielman said. “I’ve never been around a coach who puts so much time and energy into everything he did.

During the Vikings practice sessions, it was clearly hard for everyone not to think about Coach Sparano. He was someone who made his presence known in every meeting and drill. With the season quickly approaching, the Vikings players will eventually need to get back to work. Zimmer knows that’s exactly how Sparano would want it.

"I know when the vets come in and we all go to the funeral it'll be a tough day, but we're professionals," Zimmer said. "This is what we get paid to do, go out here and play. If Tony was here he would tell us, 'You got to get there and get to work.' That was Tony."

The Vikings placed center Pat Elflein on the Physically Unable to Perform (PUP) list. Elflein, who suffered a fractured ankle in the NFC Championship, had surgery in late January'. When head coach Mike Zimmer was asked about when Elflein could return, he said he "shouldn't be [out] long."

Rookies took the field for their first afternoon practice session. As always, it means QBs and other position players are lining up at various positions to fill spots during install periods. Most of the practice session involved basic individual work and installation.

During the QB/RB drills, it was worth noting how comfortable RB Mike Boone looked as a receiver. He was used in this capacity at Cincy, especially in the screen game. During the limited set of drills they ran, Boone looked natural as a pass catcher.

I wrote a piece about Korey Robertson prior to training camp. He was much bigger than I was anticipating in terms of build. Robertson was dynamic after the catch at Southern Mississippi and I'm interested to watch him when the full team arrives. The same is the case with Jeff Badet, who has been well regarded for his speed and vertical playmaking ability. When seeing him in person, he was taller than I anticipated. With all of the hype surrounding his explosiveness, he'll be worth watching. Badet also took reps in the return game and could carve out a role in that capacity as well.