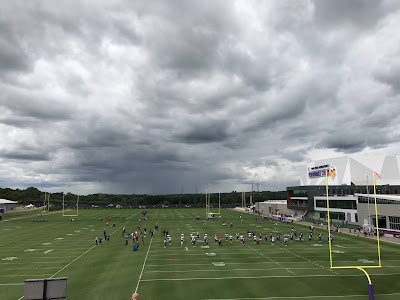 The Vikings returned to training camp with the veterans completing their first full practice of the summer. Daniel House takes you inside his training camp notebook for all the details.

The Vikings returned to training camp with the veterans completing their first full practice of the summer. It is a time to start seeing the depth chart and who made an early impression in the spring. With all the players on the field, one can see the chemistry and current makeup of the team. In the next couple days, when pads are on, the intensity will pick up to another level. Until then, it’s mainly easy to evaluate the the skill players and defensive backs. As camp progresses, they’ll be more observations to paint a clearer picture of the team’s current landscape.

Cousins and the corner route

Quarterback Kirk Cousins showed he loves to throw corner routes during his time in Washington. It has been a theme in the early stages of practice, too. In a team drill, Cousins delivered a beautiful corner route to Stefon Diggs, who had just enough space to make a grab. He also fired a similar throw by driving the pass to the hash for Adam Thielen. Thielen tracked the throw against Jayron Kearse, who was playing coverage in the team drill. The way both Diggs and Thielen run this type of route, it’s sure to be an asset to have Cousins at quarterback. Diggs and Thielen both had highlight reel grabs throughout the day. Diggs made an acrobatic grab over Anthony Harris during a DB/WR drill. In team drills, Thielen ran a fade, finishing an acrobatic over-the-shoulder catch with Holton Hill playing tight coverage. It will be interesting to watch the duo of Diggs and Thielen with a quarterback who can make a few more difficult throws throughout the game.

Beebe and the WR depth chart
When looking at the lower stages of the wide receiver depth chart, there’s a few players worth evaluating as camp progresses. Chad Beebe is very quick and uses his feet very well. He moves well in and out of breaks and gets separation in the intermediate passing game. Beebe is the type of receiver who can make plays via the screen game or when isolated in space. He also has been receiving plenty of reps in the return game to show his value on special teams. Beebe is a player who could increase his value through a strong preseason performance.

Tavarres King also stood out, especially when you see his size. He was much taller than I anticipated and has shown he can stretch the field vertically in the past. King ran a beautiful dig route against Jayron Kearse in a DB/WR drill. He had about seven yards of separation out of the break when he completed the catch. Later in practice, he also won on an out vs. Trae Waynes in a 7-on-7 drill. King has the route running skills to get open, which separates him from the pack. He’ll be someone I’m watching closely during training camp and the preseason.

Cook looks explosive, fluid
If anyone is concerned about Dalvin Cook returning from ACL surgery, I think you can relax. Cook looks extremely explosive and fluid in and out of cuts. He is hitting the hole and accelerating hard. He hit the edge quickly for a run in one of the team drills. It looked like a vintage run everyone witnessed during training camp last year. There wasn’t any pads or contact occurring, but people should be enthusiastic about how he is moving on the field with no knee brace.

Offensive line depth chart has a few surprises
As far as the depth chart goes, the offensive line lined up as you would expect with center Pat Eflein on the PUP list. Nick Easton played center with veteran Tom Compton at left guard. Mike Remmers remained at right guard with Rashod Hill kicking out to right tackle. On the second team, it was slightly surprising to see Josh Andrews handling the center duties with guard Cornelius Edison sliding over to right guard. It meant rookie Colby Gossett was third on the depth chart for the first full training camp practice of the season.

At tight end, Kyle Rudolph appears to be slightly lighter in stature. He was actually hard to recognize from a distance. The tight end showed off a little quickness out of the break when tracking a tight window throw from Kyle Sloter, who nicely placed a corner route. I want to see more of Rudolph when he's in pads to see if this is truly the case.

Linebacker depth worth monitoring
With linebacker being a very thin position group in terms of reserves, it was worth looking at the depth chart. Eric Wilson, Kentrell Brothers and Antwione Williams were the second team linebackers in the base defense. With Brothers suspended, another linebacker will need to step up and claim a roster spot. The team will likely be relying upon Eric Wilson to step up. Wilson looks like he’s bulked up in the upper frame and has improved physically after a promising rookie season. It is hard to evaluate the linebackers this early in camp, but it’s worth noting how high Eric Wilson is on the depth chart.

Holton Hill has many unique traits, young defensive backs continue learning
When watching Holton Hill’s film, you notice how well he can break on the ball and get into passing lanes. This is the case when you see him in drills during camp, too. Korey Robertson ran a dig route during DB/WR drills and Hill quickly broke on the ball to break up the pass. His athleticism and size allow him to execute many things other defensive backs can’t. Between first-round pick Mike Hughes and Hill, Mike Zimmer has another talented stable of young defensive backs to work with. Every camp, Zimmer is taking these type of players under his wing and guiding them between reps. During Saturday’s practice, he was pulling Hughes and Hill aside frequently to instruct them regarding technique and alignments. This type of coaching has helped elevate past defensive back talent. With the type of skills these two players have, the ceiling is certainly high in regard to their development. In fact, it could lead to a quicker rate of development than many would anticipate.

Another young defensive back I’ll be keeping tabs on is second-year cornerback Horace Richardson. Richardson was in excellent position to force a incompletion on an Adam Thielen fade during DB/WR drills. He worked with the second-team and was looking smooth when watching his footwork and technique. After spending last season on the practice squad, Richardson is continuing to develop. He was contesting throws and staying tight to receivers in and out of their breaks.

Finally, safety Tray Matthews had a notable pass breakup on a poorly thrown Peter Pujals pass in the flat. Matthews is another player who could surprise people in camp as the Vikings start trimming their roster down in the backend.

As camp progresses, it's worth seeing the evolution of the special teams depth chart. For now, here's a look at the punt return units: