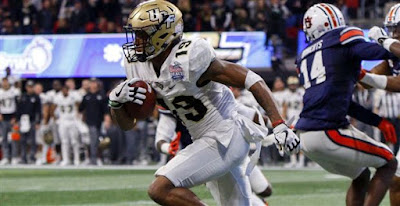 The Vikings spent a first-round draft pick on cornerback Mike Hughes, but how soon can fans expect him to contribute? Daniel House thinks it might be sooner than many anticipate.

Vikings cornerback Mike Hughes will be one player everyone wants to see in action during training camp.

Hughes, a first-round pick, was widely considered one of the top cornerback prospects in this draft class. In fact, some talent evaluators placed him in the top-ten of their overall rankings. It was tough for others to judge Hughes, who played just 1,049 collegiate snaps. He also originally attended North Carolina, but was suspended for violating team rules, following an incident at a fraternity house. Hughes spent a year at Garden City Community College before joining head coach Scott Frost and the Golden Knights at Central Florida. Last year was the largest sample size of Hughes playing in Division-1 action. More than 80 percent of his total college snaps came in 2017 at Central Florida.

It didn't take long for him to make his mark and turn the heads of scouts at the next level. Hughes is a rare athlete with superb movement skills. In high school, he was a star quarterback and rushed for 273 yards and seven total touchdowns in a state title game. He was an explosive athlete with the ball in his hands and now he uses those movement skills to his advantage as a defensive back. He played quarterback, wide receiver and cornerback in high school. As you can see, his film is really impressive from his early playing days:

Watching more film of #Vikings CB Mike Hughes. He was an insane QB in high school. Hughes rushed for 273 yards and 7 total TDs in a state title game! He played QB, WR, CB, and returned kicks/punts. Very gifted athlete and he puts those movement skills to use as a DB. pic.twitter.com/bCrQBduXEn
— Daniel House (@DanielHouseNFL) June 24, 2018

One of the best attributes of Hughes' game is his ability to react and make plays on the football. This is particularly evident when he is playing off coverage. He can react and create a play when receivers decide to snap off a route concept underneath such as hitches or comebacks. Hughes uses his speed and instincts to explode and knock passes away at the catch point. The example below shows the reactive playing style and ball skills of Hughes when he is tasked with playing off wide receivers.

Despite measuring in at just 5-foot-10, Hughes uses his instincts and overall physicality to handle big playmaking threats. This is particularly evident on underneath route concepts where he gets into passing lanes or uses a little physicality to jar a pass loose. One of the key aspects of Hughes' game Vikings talent evaluators were intrigued with was his transition quickness. This is the overall speed of a cornerback from pedal, to run, to sprint. He shows this consistently and flashes all of the agility, explosiveness and athleticism in his skill-set.

Hughes can handle playing press coverage at the next level because of his physical playing style and athletic ability. He sometimes faces a challenge when he is tasked with covering big-bodied receivers who can out-muscle him out of breaks. It either forces Hughes to use his quickness to compensate and make a play or results in the receiver winning with a few yards of separation. The clip below is an example as the receiver gets physical before the stem and snaps off his route with space. In some occasions, he is able to compensate, but the receiver will win the contested catch battle with a high-point in traffic.

Outside of that, Hughes has reps where he is very technically sound. When playing man coverage, he shows off light feet, excellent hip turn/fluidity, and acceleration. He has so much short range quickness and agility to stay on the defender's hip and redirect routes inside. The clip below is an example of all the above descriptions coming together into one positive rep.

Those are all traits evaluators look for when they are trying to identify defensive backs with upside. Hughes' athletic traits, short range quickness and overall physicality help mask the fact he is a smaller defensive back. He plays like he is much taller and bigger than 5-foot-10 and 190 pounds.

Hughes could improve as a tackler and has a tendency to shoulder players without getting good contact. This is more of a consistency issue as he showed flashes when asked to tackle in space.

Hughes also used these skills and his overall straight line speed to help shut down routes on the deep half of the field. He was often playing tight coverage on the receiver's hip for go routes and managed to make plays on the ball if they were slightly overthrown. His background as a receiver early in his football career is valuable when you watch him track the ball and finish interceptions. He had four picks and 11 pass breakups last season. Two of those came on plays of 20-plus yards down the field. According to Pro Football Focus, Hughes didn't allow a completion of more than 21 yards last year. In addition, he allowed just a 20.8 passer rating on deep passes. Receivers really struggled to get separation vertically because of his speed and overall physicality. When it came down to tracking the ball and completing the interception, he made some really difficult plays. The two clips below are just a few examples:


Hughes has plenty of versatility to cover underneath and deep which leaves the door open for him to mature and move outside. Early in his tenure with the Vikings, he has been working in the slot and mastering the footwork associated with this switch. It is one of the most difficult positions to play, but head coach Mike Zimmer has identified Hughes has the traits and mental make-up to handle the learning curve. Early reports out of mini-camp discussed how well Hughes was performing and Zimmer even went out of his way to say how well he was learning in an interview with KFAN. You can see the transition quickness, reactive playing style, physicality and evolving footwork are traits Zimmer can coach up quickly. Perhaps Hughes has a strong training camp and preseason to claim more playing time. The beauty is the fact the team doesn't have to rush him into playing. Hughes can develop at his own pace, but if he truly exceeds expectations, he could play at nickel cornerback quicker than many would anticipate.

No matter what, he'll make his mark in the return game. Hughes was one of the best returners in college football last season. He averaged 31.9 yards per kick return and 16.6 yards per punt return in 2017. He is explosive in space and can accelerate when he has a small crease. You can see how well he reads blocks and uses his athleticism when you watch the return touchdown below.


This type of versatility is another reason why the Vikings chose to select him in the first-round. The ability to do a multitude of different things not only on defense, but special teams, could make Mike Hughes a quiet x-factor for the Vikings in 2018. Minnesota already had one of the best pass defenses in the league last season, but a quick contribution by Hughes could add another element to their defense.