LB Mychal Kendricks would add another element to the Vikings' defense

The Vikings are hosting linebacker Mychal Kendricks for a visit. Daniel House explains why Minnesota's defense is the perfect fit for his skill-set.

The Vikings are bringing in former Eagles linebacker Mychal Kendricks for a free agent visit this week, according to Jordan Schultz. Ben Goessling later confirmed the report and said Kendricks is currently on his visit in Minnesota. According to Schultz, he will also visit the Raiders and Browns and may make a decision this week. The 27-year-old brother of current Vikings linebacker Eric Kendricks, spent his first six seasons in Philadelphia and was released by the team last week.

When the Eagles switched from a 3-4 defense to a 4-3, Kendricks’ playing time took a significant hit.

He played in just 25 percent of the defensive snaps in 2016, but more than doubled the total to 59 percent last season. Kendricks was involved in trade rumors for the past three years and was released to free up $5.6 million in cap space before a major June 1 deadline. Last season was a step forward for Kendricks as his 86.0 Pro Football Focus rating finished ninth among all linebackers. In addition, he was the fourth-highest graded outside linebacker, according to Pro Football Focus. Last season featured a glimpse into the production everyone witnessed earlier in his career.

During Kendricks’ second and third seasons in the league, he had eight sacks, three interceptions and five forced fumbles. Suddenly, his role decreased until defensive coordinator Jim Schwartz blitzed him more in 2017. Kendricks is very disruptive when he is used correctly and sent via blitz packages. In the clip below, Kendricks blitzed off a stunt, using his downhill speed to draw a quarterback hit and incompletion.


He was also often sent off the edge and would get a free shot at the quarterback because of his speed and ability to get downhill quickly. The two clips below are just a couple examples:

In the clip below, Kendricks delays the blitz and comes off the edge to sack quarterback Alex Smith. This type of blitzing ability is a huge asset in the linebacker's skill-set.


Kendricks plays very physical and has the speed to run down plays all over the field. In the draft process, he ran a 4.47 40-yard dash and shows off impressive closing speed. His athletic testing was extremely impressive as he finished in the 90th percentile in the 10-yard split, 40-yard dash, vertical/broad jumps and the 3-cone. This type of athleticism fits the player profile the Vikings often prefer at the linebacker position. Here's his spider chart from combine testing, via MockDraftable. 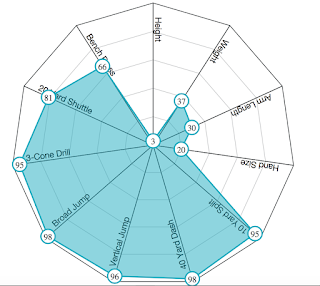 Kendricks will run down quarterbacks or running backs during long-developing plays. It often results in a throwaway or errant pass. The clip below is an example as he runs across the formation and forces Dak Prescott to throw the ball away quickly.

Early in his career, Kendricks was an inconsistent tackler, but had the range to make plays all over the field. He can move across the line of scrimmage and make run stops, too. In the clip below, Kendricks turns the corner come off the edge and finishes a tackle in the backfield.


The athleticism helps him when he’s asked to cover running backs because he has the movement and ball skills to get into passing lanes. The two clips below are examples of how Kendricks can react and swivel his hips to cover in the second level against running backs and tight ends.

There are times where this type of pursuit leads to undisciplined mistakes, including over running plays or getting too far downhill. There were two plays in his game against San Francisco where this was the case. Nonetheless, he has many of the pure skills the Vikings would need from a linebacker.

He is rangy, athletic, sound in coverage and has the ability to make tough stops in space. Kendricks is the type of sideline-to-sideline linebacker Mike Zimmer could unleash in his defense. When he is asked to be a downhill run defender, he is a fundamentally sound tackler who will make the stop. The examples below show Kendricks shedding blocks and displaying his reactive playing style.

Kendricks has a head of steam in the clip below and his helmet flies off as he recognizes and blows up the delayed draw.


Not only that, but he has shown he can blitz effectively when he is asked to rush the quarterback. It might be the strength of his skill-set. The Vikings could rotate Eric Kendricks and Anthony Barr in the Double-A gap sets and feel comfortable with Mychal Kendricks in the package. More importantly, the coaches would have him as depth in the event injuries strike. When the Vikings are in the base 4-3 package, Kendricks could play alongside Anthony Barr and Eric Kendricks at weak side linebacker. This suddenly would provide the Vikings with three top-flight caliber athletes at the position. Of course, the Vikings are in nickel quite often, but would have additional flexibility to rotate with three above average athletes at the position.

Outside of second-year linebacker Ben Gedeon, the Vikings have very little experience at linebacker. Kentrell Brothers was suspended for PED use and second-year undrafted signing Eric Wilson is the next linebacker on the depth chart. Kendricks would rotate into the mix in Minnesota, but could carve out a role as Mike Zimmer develops more sub-packages to use his skill-set. Mychal might have larger roles offered to him with other teams, but the chance to rotate into one of the top defenses in the league might be intriguing for him. He could find himself on the field more than one would anticipate, especially considering the creativity associated with having a player like him.

Minnesota also has a scheme which fits his skill-set in every way. In the past, Kendricks was pigeon-holed into a system that didn’t maximize his full potential. The Vikings need to find a rotation to take a few snaps away from Anthony Barr and Eric Kendricks. Kendricks played in 97 percent of last season’s defensive snaps and Barr’s total came in at 93 percent. After playing more than 900 snaps each in 2017, the addition of Mychal Kendricks would help preserve Barr and Kendricks as the season progresses.

Minnesota can competitively offer Kendricks a deal, perhaps in the form of a one-year contract. If he performs well, the team can decide whether they would like to re-sign him. Linebacker Anthony Barr reported to OTAs on Tuesday, according to a video posted on the team’s Twitter account.

The Vikings could sign Kendricks and test him in the system for a year. If things went well, the team could let Anthony Barr hit free agency and invest the financial resources into other contracts. Either way, this move would make sense if the price is right. Kendricks can reunite with his brother and play in a system which is perfect for his skill-set. On the other hand, the Vikings can significantly upgrade a position that could use a talent injection.