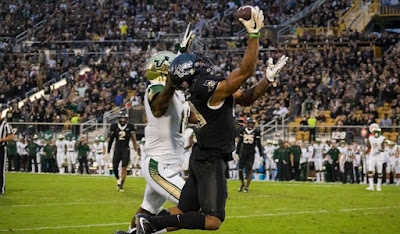 The Vikings drafted Mike Hughes, a versatile cornerback with plenty of upside. GM Rick Spielman and head coach Mike Zimmer explain what made Hughes stand out.

When UCF cornerback Mike Hughes was sliding down the draft board, the Vikings’ war room was starting to take notice. After meeting with Hughes three times during the pre-draft process, the coaching staff quickly viewed him as a system fit.

“We spent a lot of time with him,” GM Rick Spielman said. “This player was just too much value for us not to take him where we saw him in the draft.”

After a top-30 visit and interaction with the coaches, Hughes himself even started to feel like landing in Minnesota was a real possibility.

"The relationships I built with the coaches, I knew they were pretty excited about me, so once they got the chance to grab me, I wasn’t surprised,” Hughes said.

In a league where passing is such an integral aspect of the game, bolstering the secondary was a priority for the Vikings. With veteran Terence Newman unlikely to return and the future of Trae Waynes uncertain, the team decided to spend their first round selection on a cornerback.

When the Vikings were on the clock, they couldn’t pass up the opportunity to select the highest rated player available on their board, while filling a need. With a young stable of cornerbacks like Trae Waynes and Mackensie Alexander developing, the coaching staff can ease Hughes along slowly.

“We are very young at that position, but our younger guys are starting to mature now into very good football players and we see the same path for Mike when he gets in here,” Spielman said.

Until he is ready to serve as a full-time cornerback, Hughes will be a valuable asset on special teams. He was ranked as the top return man in college football, according to Pro Football Focus. Hughes averaged 31.9 kick return yards and added three total return touchdowns.

“This kid will help us in all phases of special teams,” head coach Mike Zimmer said. “And then we are going to mature him into being a full-time player. I don’t know how soon that will be, but he’s got the traits we’re looking for.”

Even if the role is just on special teams in 2018, the return game is one area the coaching staff emphasized when evaluating cornerbacks. It was a weakness Zimmer and Co. wanted to improve heading into the draft.

Hughes’ upside as a cornerback, combined with his ability to add explosion in the return game is an added bonus. Not only that, but Hughes can play on the boundary or at nickel cornerback, improving his overall versatility. It’s a quality Mike Zimmer thinks could help the team’s creativity in nickel sub-packages.

“I’ve always kind of tinkered around with maybe having one safety and four corners – things like that,” Zimmer said. “It was give us some flexibility in what we do with some of the nickel packages.”

Hughes was a one-year starter at UCF after joining the Golden Knights from North Carolina. He left the Tar Heels program after a sexual assault allegation emerged. The charge was later dropped. In addition, Hughes was also suspended one-game in 2015 for a misdemeanor assault charge. This charge was also dropped after Hughes did community service. The Vikings, along with other teams, heavily vetted Hughes during the draft process.

“We spent a lot of time with a lot of people that had him in their football programs,” Spielman said. "After our extensive research, no question we felt very confident with him coming in and being a Minnesota Viking.”

After selecting Hughes, the team still sees plenty of talent on the board, including on the offensive line – a major position of need. Mid-round talent is something the Vikings added last year when they selected starting center Pat Elflein in the third round.