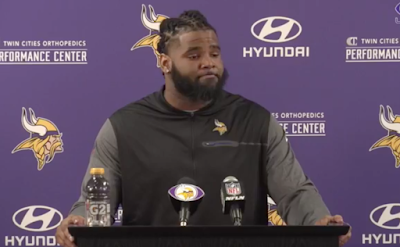 The Vikings added another weapon to their defensive line by signing defensive tackle Sheldon Richardson. Mike Zimmer and his staff landed one of Minnesota's top needs: a three-technique defensive tackle.

The Vikings already had one of the top defensive lines in the league, but Mike Zimmer wasn’t satisfied yet. He entered the offseason with one goal: to find a three-technique defensive tackle.

Friday, the vision became a reality.

"Sheldon is one of the most disruptive lineman in the NFL,” head coach Mike Zimmer said. “He didn't have a lot of sacks but sacks are not our number one goal. It's getting the QB off of the spot and being disruptive."

Although Richardson had just one sack last year in Seattle, he tallied 28 hurries, according to Pro Football Focus. He had eight sacks in 2014 as an integral piece in Rex Ryan's defense. He often lined up in three-technique, but has the flexibility to rush in different positions as well. The versatility will serve him well in Mike Zimmer’s defense. It will take pressure off teammate Linval Joseph, who often faces double teams because of his dominant skill-set.

“It's one where those guys can affect the quarterback as much as any position, along with our defensive ends,” Zimmer said. “It obviously takes the double teams off of some guys.”

“When Sheldon came into my office I was watching three techniques in the upcoming draft,” Zimmer said. “This was very important for us.”

Richardson had drawn interest from the Vikings early in the process and the team flew him to Minnesota for a private visit. He did receive an offer from Seattle, but Minnesota's organization, along with the brand new TCO Performance Center caught the free agent’s attention.

“It’s the best building in the league. Have you seen the building? Smells like new paint don’t it?” Richardson said.

In Minnesota, Richardson hopes to finish sacks, something he was disappointed about last season in Seattle. With the help of respected defensive line coach Andre Patterson, he hopes to thrive in his new role with a talented nucleus of players around him.

The ultimate reason Richardson signed with the Vikings was for a chance to win games. He viewed Minnesota as a place where he could thrive and play deep into the playoffs. He will certainly be in a situation to succeed with Linval Joseph at his side, along with Danielle Hunter and Everson Griffen rushing off the edge.

"The whole D-Line works," he said. "Coach [Patterson] definitely gets those guys ready week in and week out.”

In the end, Richardson had one goal on his mind during free agency.

“I wanted the best opportunity to win the Super Bowl, and this was it."