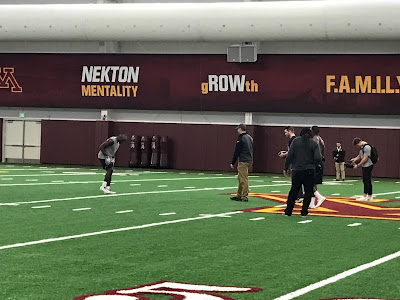 Minnesota held their annual Pro Day in the new Athletes Village at the University of Minnesota. More than 22 NFL teams were in attendance to watch 12 Gophers and three small school players workout. It was an important opportunity for players as none of them were invited to the combine last March. The scouts paid particularly close attention to defensive tackle Steven Richardson, running back Kobe McCrary, linebacker Jonathan Celestin and cornerback Kunle Ayinde.

Running back Kobe McCrary stole the show with many of his testing numbers. He had 25 bench press reps to go along with a 36-inch vertical. His bench press would have ranked third among NFL Scouting Combine participants, while his vertical jump was sixth. He ran a 4.75 40-yard dash, but has personally ran in the upper 4.6 range during his personal workouts. McCrary’s on-field workouts displayed a player with excellent balance and agility, along with reliable hands. At Minnesota, he hid in the shadows behind two other solid running backs, but made his mark on the field. He rushed 94 times for 496 yards and eight touchdowns. He transferred to the Gophers after playing behind Chris Carson at Butler Community College. McCrary had one of the best statistical outputs for yards after contact last season, according to PFF. His stock certainly should rise after today’s workout, where he displayed the complete upside in his skill-set.

Defensive tackle Steven Richardson didn’t have a reported 40-yard dash time, but tested relatively well when you consider his frame. During on-field workouts, Richardson displayed his bend and quickness off the snap. He changes direction well and projects as a three-technique situational pass rusher. His testing doesn’t give justice to the full skill-set he can provide at the next level. When he is lining up against offensive linemen, he has the ability to win by staying low and using his explosion. During on field testing, he showed off his quick hips and ability to change direction quickly, which makes him very unique as a player.

CB- Kunle Ayinde- 5-foot-11, 201 pounds, 8 5/8" hand, 31 2/8" arm, 76 2/8" wing, 8 bench press reps. 34” vertical
Cornerback Kunle Ayinde led all Gophers with a 10-foot broad jump. He showed his lower body explosiveness and short-range quickness. Ayinde ran an unofficial 4.71 40-yard dash, according to reports. However, other hand times had him faster (low 4.6 range). He also added a 34" vertical. Ayinde flashed in the on-field drills showing off his agility and movement in and out of breaks. On tape, he shows an ability to make physical plays against the run. Ayinde has embraced the underdog role, working his way into a rotational starting role after being a walk-on. He puts in work and is regarded highly by teammates and coaches for his preparation.

LB- Jonathan Celestin- 6-foot-0, 230 pounds, 8 7/8” hand, 30 2/8” arm, 75 4/8 wing, 27 bench reps, 4.70 40-yard dash,
Linebacker Jonathan Celestin put together an impressive senior campaign. He finished second on the team with 78 tackles (55 solo) including 5.5 for a loss. Celestin also had a pick-six, showing off his coverage skills. He is a very rangy linebacker with excellent instincts. Celestin was a captain on the team last year, stepping up as a vocal leader on defense. He tested well during the Pro Day workout, posting 27 bench reps. This number would have ranked him second among Scouting Combine participants. He can latch onto an NFL team as a solid special teams player with developmental upside at the linebacker position.

P/K- Ryan Santoso
Punter Ryan Santoso was booting punts and field goals during the Pro Day. Many teams view him as a combination specialist (punts/kicks or kicks/kickoff). He came up just short on a 70-yard field goal try and was accurate from 50-plus yards out. I view Santoso more as a place kicker at the next level. He displays impressive leg and showed range in drills. He has been training with other prospects in Alabama and learning from a position coach. A team might elect to sign Santoso as a training camp leg. He was a placekicker earlier in his career, hitting 29 of his 39 tries, including a 52-yard game-winner against Purdue.


The Gophers had three small school players at the Pro Day, but one really stood out. St. John’s wide receiver Evan Clark had a 36.5” vertical with a frame just over 5-foot-10. He also added 18 bench press reps and ran a 4.51 40-yard dash. During on field workouts, he was very smooth when asked to run intermediate routes. Clark also displayed reliable hands, catching passes outside his frame. I could see him being a player teams will bring into camp as a return man. If things go well, he could be a spark-plug player offensively. Clark has high upside and certainly displays excellent short-range quickness/agility.
Posted by Daniel House at 2:37 PM