How would Kirk Cousins fit with the Vikings?

Negotiations are underway in the NFL with the Vikings emerging as a top candidate for free-agent quarterback Kirk Cousins. Daniel House took a deep dive into Cousins' skill-set and explains his potential fit with the Vikings.

Negotiations are underway in the NFL with the Vikings emerging as a top candidate for free-agent quarterback Kirk Cousins.

The Vikings are set to make a splash if they can lure Cousins to Minnesota in free agency. Cousins is widely considered one the top free agent in this year’s class and will command top-flight money from a potential suitor. The Vikings likely won’t mortgage the future to land Cousins, especially considering they have done so much work building a young core on their roster. His contract could range anywhere from $25-$30 million, and with the Jets competing, the number could become too rich for the Vikings’ blood. However, I would willingly bet he reaches an agreement with Minnesota in the coming days.

In the end, Cousins might decide the Vikings are closer to a championship, something he may covet more than money. He has made nearly $43.9 million is salary over the past two seasons in Washington. Cousins has the chance to choose his team and might decide championship upside is more important than a few additional dollars. If Minnesota wants to make the contract work, they’ll need to frontload the money by dolling out a heavy signing bonus. Then, they could pay Cousins more in the first year of his deal to help alleviate future cap space. It makes sense if both parties can meet in the middle.

Kirk Cousins has thrown for over 4,000 yards and 25 touchdowns during each of his past three seasons. His interception percentage has been around 2.5 percent in each of those years, according to Pro Football Reference. Cousins could really flourish in Minnesota with wide receivers Stefon Diggs and Adam Thielen at his disposal. He has never worked with a duo that can gain separation and make contested grabs like Diggs and Thielen. In the backfield, running back Dalvin Cook also adds intrigue to an offense already filled with dynamic weapons.

So what does Cousins provide that other Vikings quarterbacks haven’t?

Kirk Cousins’ ability to throw downfield is a significant upgrade for the Vikings. The one thing you will notice with Cousins is his ability to throw with anticipation and touch to the sideline. When he is throwing outside the hashes, his ability to time the throw with anticipation is excellent. When he tosses the ball deep, he delivers passes with touch and accuracy. The clip below shows his superb touch and accuracy when throwing the pass between the defensive back and safety. He identified he had a 1-on-1 matchup and the safety was late over the top:

If you freeze frame the clip, you'll understand how accurate this pass was: 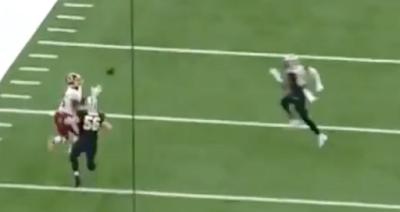 Cousins hasn't always been spectacular at tight window throws, but he has a higher success rate when they are downfield throws.

He completes 63% of his third down passes of 20-plus yards down the middle. He also completes more than 64 percent of his throws from 0-15 yards, according to Sharp Football. In fact, Cousins had a 101.0 quarterback rating on throws more than 15 yards downfield.

I went through all of Cousins games and wanted to find the tendencies of his game. The aspect which stands out is the downfield passing and accuracy. He can certainly hit Stefon Diggs and Adam Thielen when they are placed in mismatches. There were many situations last year where they were open, but Case Keenum was unable to connect downfield. Cousins’ awareness and ability to go through his reads stands out in those situations. The clip below is an example of him going through his reads and anticipating where his teammate will be:

More importantly, Cousins has ranked in the top-three of the league in play-action passing during each of the past three seasons, according to Football Outsiders. Case Keenum was one of the best quarterbacks in play-action last season as well. The Redskins’ play-calling allowed them to capitalize upon play-action looks. Cousins was accurate on those throws and did an excellent job of selling the play fake. They used it often to set up easy crossing routes or slants, like in the clip below:

The Vikings can use a high volume of play-action because of their running game and the ability of their wide receiver duo to create short space separation out of breaks.

Cousins’ mobility also is vastly underrated. Over the past four years, Cousins' tape shows his ability to run off bootlegs or designed runs. He could execute run-pass options looks if John DeFilippo is considering adding more of these concepts to his playbook. The clip below shows Cousins out of a designed zone-read play:

Despite all of these strengths, many people have called into question why the Redskins decided to part ways with Cousins, while trading for Alex Smith from Kansas City. It’s a fair point to discuss, especially considering Cousins has a 26-20-1 record as a starter. However, context is needed. The Redskins’ defense was in the bottom 15 of total defense for each of the past three seasons. Washington played from behind and were forced into shootouts with many of their opponents. Cousins’ play hasn’t been the only factor contributing to his team’s success. Nonetheless, the only concerning stat is his 34.6 percent completion percentage on third down, which ranked 18th among 20 NFC quarterbacks last year. There are moments where Cousins has tendency to hold the ball in the pocket and not set his feet when facing rushes. In 2017, the Washington offensive line couldn’t handle pressure packages, which certainly was a contributing factor to Cousins’ third down success.

Many people around the league have said Cousins’ footwork is something which leads to inconsistencies in his game. Many times he falls off his back foot when he trys to slide out the pocket and make a play.

Sometimes, his decision-making outside the pocket and on the run gets him into trouble. He also has a tendency to struggle when throwing into tight windows, which can be attributed to passes sailing due to footwork. This problem is more prevalent in the short-to-intermediate passing game. However, a small contributing factor to this was how poorly Washington’s offensive line struggled to protect last year. Cousins was often trying throw off his back foot with a defender in his face. The clip below is an example of him facing pressure and forcing the pass:

There are moments where he can and will thread the needle accurately, though. The clip below shows him setting his feet in a clean pocket and driving the pass into a tight space. If the Vikings can continue building their offensive line, Cousins will really flourish:

Despite his footwork tendency, he still has a 2.6 percent interception percentage which ranks in the top-30 all-time among NFL quarterbacks. Cousins' interceptions can be untimely, but many of them were the result of a collapsing pocket last year. He also made some very difficult throws in the face of pressure last year as well. This throw is an example:

Cousins is a very accurate passer across all depths and will have the chance to work with one of the best wide receiver duos in the league, if he chooses Minnesota. When the pocket is clean, everything starts clicking for #8.

He also has shown flashes of brilliance in the fourth quarter, but also made mistakes late in games. According to Pro Football Reference, he has thrown 22 career interceptions in the fourth quarter. In shootout situations, Cousins was often taking chances or trying to do too much. However, there were a few games, including the New Orleans and Seattle matchups last year, where he showed how much potential he has in these moments. The following two clips below show consecutive throws during a pivotal fourth quarter drive in a 17-14 win over Seattle.


He hasn't been awful late in games and the idea of controlling the tempo with a top defense will help substantially. Cousins is dynamite when throwing nine routes to the sideline or up the seam. Diggs and Thielen love their double moves and create quick separation because of it. Cousins' ability to throw with anticipation and timing pairs very well with the wide receiver duo.

There will always be concerns about why Washington let Cousins willingly leave. With a top defense to complement him and scattered playmakers, the free agent quarterback has to understand Minnesota is a favorable environment for him to succeed. If the Vikings can manage to structure the deal in a way which allows them to extend core players on defense, this move has the chance to pay off very quickly.

Cousins certainly has his flaws like every quarterback, but his skill-set would provide the team with stability at quarterback, something they haven’t had for a very long time.