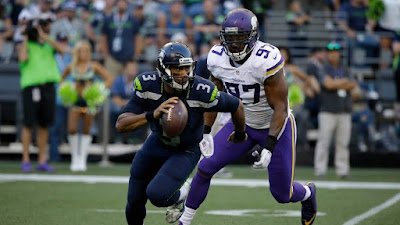 The Vikings showed signs of life on offense in their second preseason game. Daniel House has a few quick takeaways from their 20-13 loss in Seattle.

The Vikings' first-team offense showed more rhythm in their second outing of the preseason. They were unable to punch the ball into the end zone, but moved the ball through the air with improved protection. More importantly, rushing lanes were open for Dalvin Cook to make plays. On defense, the Vikings allowed two Russell Wilson passing touchdowns and a pair of Blair Walsh field goals. A late Bucky Hodges touchdown wasn't enough as the Vikings fell to the Seahawks, 20-13.

Here are a few quick takeaways from the second preseason game:

First-team offense shows a little more rhythm
The first-team offense played deep into the second quarter Friday night in Seattle. On the first drive, the offense showed signs of rhythm. Quarterback Sam Bradford found wide receiver Stefon Diggs for two quick completions and hit Michael Floyd on a comeback. Moments later, Bradford delivered a 39-yard pass to Stefon Diggs, taking a big hit to complete the throw. However, a false start, botched screen pass, and a delay of game penalty stalled the drive. Kicker Marshall Koehn drilled a 29-yard field goal to put the Vikings on the board. The offense showed improved rhythm, but was still unable to punch the ball into the end zone against Seattle. However, the first-team unit tallied eight total first downs and the offensive line kept the pocket clean. The only blemishes came when quarterback Sam Bradford poorly placed a pass up the sideline to Stefon Diggs and overthrew Dalvin Cook in the flat.

Cook shows his elusiveness, offensive line performs well
The Vikings didn’t allow a sack in the first half and opened lanes for running back Dalvin Cook to be successful. Cook rushed for 40 yards on seven carries, nearly breaking off several big runs. His long run of the day was set up beautifully by Nick Easton and Rashod Hill on the left side. Cook’s elusiveness allowed him to slither through lanes. He nearly broke several tackles to bust off longer runs in the second level.

The interior of the Vikings’ offensive line executed very well and the tackle spots gave Bradford time to test the perimeter with throws up the field. The Vikings’ offense still managed to move the ball well on multiple drives, but were unable to reach the end zone. It was definitely encouraging to see how well the offensive line performed across all units. Bradford and Keenum both had adequate time to throw. Nick Easton performed very well at left guard, getting into the second level to spark a Dalvin Cook run. In addition, Pat Elflein had several positive reps as a run blocker and pass protector. At a quick glance, both Rashod Hill and Mike Remmers held up well. Hill was especially notable, displaying more consistency across his reps.

Diggs flashes, Hodges makes a touchdown grab
Wide receiver Stefon Diggs was getting open via a variety of different routes and led the team with four catches for 65 yards. He was the go-to target for Sam Bradford and helped move the chains on several occasions. Most notably, Diggs ran a nice route to get ample separation for a 39-yard grab up the sideline. If he can stay healthy, Diggs has a chance to be one of the top wide receivers in the league this year.

Michael Floyd had one chance to make a contested grab. He was unable to win at the catch point to haul in the pass, but had position. Wide receiver Jarius Wright also had a tough grab to move the chains during the two-minute drill. Tight end Bucky Hodges added two grabs, including a 21-yard touchdown where he displayed impressive body control to make a contested grab. Hodges was quiet until the fourth quarter, but flashed up the seam as a big target.

Bower continues his strong preseason
Defensive end Danielle Hunter was dominant against the run and tallied a key third down sack. Hunter was very disruptive and forced two throwaways in the early stages of the game. Most notably, Tashawn Bower was impressive again. He picked up a sack and a quarterback pressure on Friday night. Bower has become more compact and explosive out of his stance. He also is using hands as an asset in his pass rushing arsenal. In addition, Ifeadi Odenigbo tallied a sack coming off the opposite edge. The Vikings have plenty of talent at defensive end, which will make roster cuts challenging.

The team still had trouble stopping the run and had a 4.6 yards per carry average at one point. When I watch the tape back, I’ll be analyzing the defensive tackle spot to see if that was an issue again. Within the interior, Jaleel Johnson had multiple tackles for loss and was making noise against the run. He is a versatile defensive tackle and I would like to see him get snaps with the first-team as an experiment. In addition, Will Sutton displayed his blend of speed and power to create a quarterback hurry. He also stood out against the run a few times. He might be outperforming defensive tackle Datone Jones, who was rather non-descript during training camp, too. The Vikings have a big decision to make when cutting down the three-technique defensive tackle spot.

Gedeon gets the start
Linebacker Ben Gedeon started at weakside linebacker and continued to flash against the run. He notched five tackles and continued to make plays downhill. Gedeon was up-and-down in coverage, but appears to be getting better with more reps. There was one instance where he was unable to hold onto the tight end for a split second and it led to a big gain up the seam. Linebacker Edmond Robinson lost his man on a long passing play and was out of position on at least two running plays. It appears Mike Zimmer wants to take a long look at Gedeon as Robinson and Emmanuel Lamur have yet to separate themselves. Linebacker Eric Wilson displayed impressive closing speed to stop Russell Wilson outside the pocket. Wilson continues to make plays all over the field, especially as a run defender. He also added a fumble recovery in the fourth quarter, returning it 24 yards.

Mackensie Alexander exploited
Cornerback Mackensie Alexander struggled in this game. He lost to Doug Baldwin on a deep crosser, was unable to fight through a pick, and fell down on another coverage play. Alexander was targeted frequently and didn’t hold up well. In addition, veteran Terence Newman was called for a holding penalty and lost to wide receiver Doug Baldwin twice for a combined 16 yards. On the bright side, Antone Exum Jr. delivered a strong hit across the middle to force an incompletion. He executed his coverage responsibilities well and made plays in the box as a run defender, too. However, the Vikings’ secondary, especially the second-team unit, struggled to cover the Seattle wide receivers. There were big chunks of yardage allowed through the air and it will be worth watching the tape to see what went wrong.

Ryan Quigley dropped a beautiful punt inside the 5-yard-line by kicking into the coffin corner. Quigley was punting well directionally. Taylor Symmank was less impressive, booting a poor 24-yard punt in the first half. In the kicking battle, Kai Forbath drilled an impressive 51-yard field goal with plenty of distance to spare. The veterans definitely separated themselves in a positive way on Friday night.

Rodney Adams fumbled the opening kickoff of the second half, but sacks by Tashawn Bower and Ifeadi Odenigbo held the Seahawks to a field goal.

Quarterback Taylor Heinicke still looked uncomfortable and threw an interception in the fourth quarter. He also made several poor reads when going through his progressions. He appears to be very uncomfortable in game situations right now. Heinicke recovered late in the game, finding Bucky Hodges twice up the seam, including a 21-yard touchdown. He delivered two throws with nice zip and placement to Hodges on the scoring drive. Quarterback Case Keenum went 12-for-18 for 70 yards and commanded the offense well. He continues to solidify himself as the leader in the backup quarterback race.
Posted by Daniel House at 12:17 AM