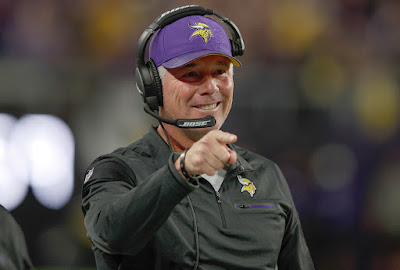 Vikings offensive coordinator Pat Shurmur spoke with the media and Daniel House chatted with defensive tackle Will Sutton after the morning walkthrough.

In the running back room, Shumur is pleased with the trio of Dalvin Cook, Jerick McKinnon, and Latavius Murray. He said all of them can be rotated based upon situations in games, much like he did with a trio of talented running backs in Philadelphia.

“We feel like we have a lot of guys in that running back room that deserve carries,” Shumur said. “From a substitution standpoint, we can give them chunks of time or specific plays or we can just get a feel for how they’re doing and get fresh backs in there.”

Rookie running back Dalvin Cook has been seeing an increased workload as veteran running back Latavius Murray recovers from ankle surgery. Cook continues to work on pass protection as he makes the transition to the NFL.

“[Cook has] done a good job,” Shumur said. “I don’t see any elements of running back play that he can’t be very good at and pass protection is one of them.”

Shumur continues to focus his attention on improving the offensive line and developing players among all tiers of the position group. He said the experience they receive when playing against their defense is very beneficial.

“We really want to develop,” Shurmur said. “What’s good about practicing against our defense cause they give us so many different things.”

A player the coaches are working to develop is left tackle Rashod Hill. Hill is receiving more reps as starter Riley Reiff continues to miss practice with an injury. Shurmur wants to develop the long arms and size Hill has within his skill-set.

“[Hill has] certainly benefited from more reps than we thought he would get,” Hill said. “We see steady progress in him.”

Many eyes have been on tight end Bucky Hodges, a rookie target the Vikings will utilize frequently in 2017. He continues to adjust at the NFL level and is playing a different role in this offense.

“[Hodges has] gotten better,” he said. “I think he still needs to improve. We are asking him to do some things at the tight end position that he didn’t do much of at college. Bucky is a tough guy, he showed up well in the red zone in terms of getting open, which is good.”

The next step for Hodges, according to Shurmur, is to continue developing from a fundamental standpoint. He is starting to develop more physicality, but must embrace the small details, such as footwork.

“[Hodges will] stick it in there,” he said. “Now it’s just a matter of tying that courage to do it with the fundamentals of the footwork or the fit and the finish.”

In addition to Hodges being utilized as a red zone target, Shurmur will have wide receiver Michael Floyd, following his four-game suspension. Floyd has put together a strong camp and Shurmur said the coaches knew what they were getting when they signed him.

“We were certainly excited as offensive coaches when [Floyd] became a part of our team,” Shurmur said. “I think the thing that I’m seeing now as compared to the spring is just his physical presence out there. He can make contested catches, but you’ve seen him doing a decent job of getting behind the corners, which is a good thing.”

Sutton talks about his system fit
Defenisve tackle Will Sutton signed with the Vikings in May after being released by the Chicago Bears. Sutton, an athletic defensive tackle, wasn’t a fit in Chicago’s 3-4 defensive system. He has been adjusting to playing in a 4-3 system in Minnesota.

“This definitely fits my skill-set better,” Sutton said. “Being able to play at a lighter weight, getting on the edges, playing that three-technique, really attacking and getting after it.”

He is continuing to work on his technique, something he says defensive line coach Andre Patterson is stressing with young players at the position.

Sutton said it is important to have certain pass rushing moves, but reacting to the offensive lineman is one of the most important aspects of playing within the interior.

“Finding what you’re good at and working on the things that you are good at and honing those skills,” he said. “We know our best move and react to the o-lineman.”

The transition to Minnesota has been a swift one for Sutton, who joined the Vikings late in free agency. He said the veterans on the roster are mentoring all of the young defensive lineman to achieve success as a unit.

“If there’s something that coach doesn’t see, but they see, they’ll pull you aside and tell you what you need to do,” Sutton. “Everybody from top to bottom has just been real great on helping each other out so we can all be successful.”