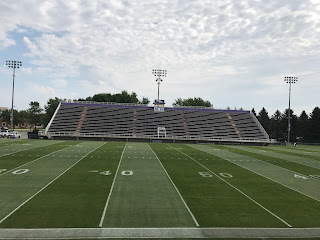 Vikings head coach Mike Zimmer spoke with the media following Monday’s morning walkthrough in Mankato. Daniel House has all of the information from Zimmer.

He spoke about running back Latavius Murray and provided an update on his recovery from foot surgery in March. Murray was placed on the PUP list and Zimmer isn’t sure when the veteran will return.

Last season, the Vikings battled injuries up front and it took a toll on their entire offense. The offensive line allowed 38 sacks and a whopping 104 quarterback hits in 2016. Many of the issues were a result of injuries and a lack of depth at the tackle spots. The coaches hope to improve on the offensive line, but Zimmer believes there is one major key to addressing the issues at tackle.

“Well, we need to stay healthy I think,” he said.

Zimmer said the Vikings are doing what they can with rehab and training to prevent injuries, but there are instances where it can’t be prevented.

“Sometimes it’s just the luck of the draw,” Zimmer explained.

This year, the NFL eliminated the first set of roster cuts and will trim from 90 to 53 players in late August. It means coaches and general managers will be able to keep 15 additional players for a longer period of time. Zimmer is in favor of this decision when it comes to player development.

“I like it,” he said. “I think it gives a lot of guys more chances to be evaluated with that fourth preseason game.”

It will allow the team to evaluate young players and a few returning veterans for an extended period of time. For example, the safety position is one group where several contributors could vie for the final roster spots. Zimmer said second-year safety Jayron Kearse has work to do from a technique standpoint, but that he is intrigued by his skill-set in the backend.

“The biggest thing he has to do is be able to drop his hips in space to make open field tackles,” Zimmer said.

Another battle on the roster will be for the kicker and punter jobs. Punter Taylor Symmank will compete with veteran Ryan Quigley, while kicker Marshall Koehn will battle with incumbent Kai Forbath. Zimmer said he and special teams coordinator Mike Priefer will make a determination on who wins the job, but the preseason is where the bulk of observations will take place.

“I have to figure out who it’s going to be. When we’re out here like this, we evaluate,” he said. “When we get out in the preseason, that’s when the real lights are turned on.”