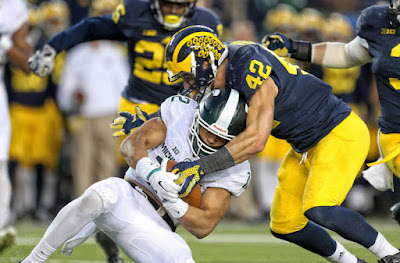 The Vikings needed to add more depth at linebacker and Michigan product Ben Gedeon may be a two-down linebacker for the future.


The Vikings needed to add more depth at linebacker and Michigan product Ben Gedeon may be a two-down linebacker for the future.

Gedeon provides the Vikings with a two-down run defender in their base 4-3 defense. He was named second-team All-Big Ten after leading Michigan with 106 tackles last year. Gedeon was only a full-time starter for one season, which provided less tape for other teams to evaluate. In his previous three seasons, he was a contributor on all of the Wolverines special teams units. This is another way he'll provide the Vikings with value in the event he isn't an immediate contributor on defense. Not to mention, you can just tell he lives and breaths football, which fits into the mold of players the Vikings like on that side of the ball.

Due to Gedeon's limited speed, he'll likely be playing inside on rushing downs. He's an extremely instinctive player that diagnoses running plays at a quick rate. He can get downhill and plug the gap because he recognizes the play in its early stages. Gedeon isn't a player who will get sideline-to-sideline, but the Vikings have two athletic linebackers in Anthony Barr and Eric Kendricks who can handle those duties.

Last year, the Vikings were really exploited in the base 4-3 defense. Opposing teams wanted to force the Vikings into playing base, rather than the nickel defense. It was because teams were able to run the ball effectively and pass to tight ends across the middle out of those sets. The Vikings had trouble covering any crossers when they were in the base defense. The Indianapolis Colts game last season is one instance where this really stands out. Gedeon showed he can cover those type of plays sufficiently. However, the sample size wasn't very large for plays where he was asked to cover.

If Gedeon were to play in the future, he needs to be inside at MIKE linebacker, while Kendricks and Barr move outside in the base defense. Gedeon provides a tremendous skill-set against the run and uses his strong lower body to engage and pull off of blocks. He is able to break down and move laterally very well to make run stops too. Gedeon is a player that plays very physical and gets downhill quickly off the snap. In the clip below, he bursts through the gap and breaks down with short/choppy steps to maul the ball carrier.

Gedeon isn't very speedy from sideline-to-sideline, but he can close quickly on plays when he diagnoses them. He is a downhill run defender that moves with quick bursts through the gaps. He has a strong motor and is agile enough to square up and make the tackle. Gedeon has the size and lower body strength needed to be an effective two-down "thumper" on defense. He isn't an impressive tackler in space, but that won't be what he's asked to do in Minnesota. Gedeon could work his way into the base defense at MIKE linebacker to be a two-down run defender. In addition, he has enough ability to allow the Vikings to play more base defense when necessary.

In the play below, Gedeon adjusts his read and quickly recognizes the quarterback has the ball. He quickly redirects, squares up, and bursts forward to pick up a sack. This is the type of diagnosis Gedeon naturally makes as a player. He is tough, instinctive, and plays with very good size. I want to see him get reps at middle linebacker with Kendricks and Barr on the outside in training camp.

The Vikings still have work to do against the run and they need a linebacker that can play effectively against the run at the MIKE spot. Over the past three seasons, the Vikings have allowed 106.9, 108.5, and 121.4 rushing yard per game averages. This statistic has improved every season, but Mike Zimmer has continually expressed his wish to improve against the run. The team drafted Gedeon and Jaleel Johnson to help bolster this area.

Minnesota drafted Kentrell Brothers last year, but he is more of a sideline-to-sideline player with less size. Gedeon is a pure run defender with more size, physicality, and toughness. He should fit nicely into the brand of tough, physical, and smart football the Vikings like to start. His biggest weaknesses are speed and coverage skills, but his role in this system will likely mask these deficiencies.

Finally, I saved my favorite clip for last. Gedeon plays with physicality and a relentless motor. On this slow developing play, Gedeon immediately diagnoses the jet look and blows up the ball carrier. He shows a nice burst and strong explosion to make the stop. In this instance, Gedeon used light feet and superior diagnosis skills. He is more effective when he doesn't play with heavy feet, but it isn't something he does all the time.

Overall, Ben Gedeon has strong upside as a potential two-down starting MIKE linebacker in the base 4-3 defense. He'll likely need a year to adjust and earn more playing time, but I wouldn't be entirely surprised to see him play more than many expect. If he doesn't see action on defense, he'll be very valuable on special teams because of his tackling skills. Gedeon is a player that has limited tape and I think he might be more under-the-radar than people are anticipating right now. He received high level instruction at Michigan and will only continue to grow with more experience.