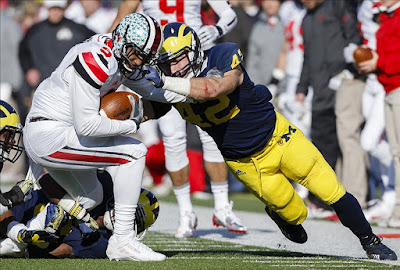 The Minnesota Vikings selected Michigan linebacker Ben Gedeon with the 120th pick in the fourth round of the NFL Draft.


The Minnesota Vikings selected Michigan linebacker Ben Gedeon with the 120th pick in the fourth round of the NFL Draft. With the linebacker class starting to become weaker as the draft progressed, the Vikings had to snatch up a capable player at this position.

Ben Gedeon was a four-year letterman at Michigan and made 14 starts, while notching 177 tackles and 6.5 sacks. He was the top performer at bench press (27 reps) and tallied the third-best 60-yard shuttle (11.58).

Gideon said he had contact with the Vikings at both the Senior Bowl and Scouting Combine.

"I talked to Coach Zimmer at the Senior Bowl. I talked to him a good amount there," he said.

He will be capable of playing inside as a solid downhill run defender. This is something the Vikings needed from the linebacker position. Gedeon said he can play either inside or outside, but his tape aligns well with a downhill inside linebacker.

"I feel comfortable at any of the spots in a four down defense," Gedeon said.

Gedeon won't blow you away with his speed, but all of his testing such as bench press, shuttle drills, and bench press are well above average. He has good size and extensive special teams experience. More importantly, he is a solid tackler and can earn more reps as an inside linebacker if he performs well in camp.

Gedeon's versatility and raw talent are all aspects of his game that can be developed. In the meantime, he will produce on special teams and provide depth in the linebacker room.