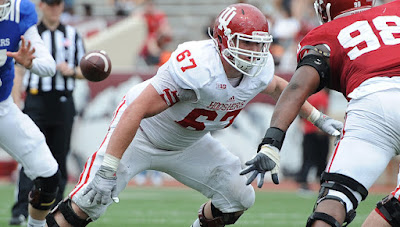 The NFL draft is under ten days away and the Vikings don’t hold a first round pick. However, they will have the chance to select a quality player in a deep draft. Here are five players Daniel House will be keeping an eye on.

The NFL draft is under ten days away and the Vikings don’t hold a first round pick. However, they will have the chance to select a quality player in a deep draft. With needs on the offensive line, in the backend of the defense, and running back, the Vikings will have plenty of options. The safety and running back class is very strong, but the offensive line position has less depth, especially at tackle. The Vikings added two tackles in free agency and need to zero in on the right guard spot with one of their top picks. There are a few viable options at those position and I’ve picked out five names to monitor closely as the draft quickly approaches.

Dan Feeney- OG – Indiana
This pick would make the most sense for the Vikings in the second round. After covering the Gophers and spending time analyzing Big Ten football, I came away very impressed with Dan Feeney. I was a huge fan of Jason Spriggs last year and Indiana has done a great job of developing quality offensive lineman. Feeney would be the immediate starter at right guard and can substantially upgrade the offensive line unit. He has a fantastic punch and is light on his feet to keep up with pass rushers. In situations where he was faced with a blitz, he managed to hold up and was able to diagnose and adjust to them.

The main area I would like to see him improve is from a pad level standpoint. He has a tendency to get too upright, which weakens his anchor and ability to obtain leverage. However, this all can be corrected with some fundamental work in camp. Feeney plays with a tough demeanor and may be the best pass blocking guard in this draft. He plays smart and with great awareness, which fits into the brand of players Mike Zimmer and Rick Spielman like to draft. The team can immediately solidify the right side of the offensive line by having Feeney and Mike Remmers. I also wouldn’t count out a guy like Ohio State center Pat Elflein, who is the definition of a smash-mouth offensive lineman. His stock continues to shift and the team might have a chance to select him in the third round.

Taylor Moton- OG/OT- Western Michigan
Taylor Moton could be gone by the time the Vikings select in the second round, but there is a chance he could fall into their laps. I see Moton as a guard at the next level, however, he could easily play tackle with some coaching. When I watched his tape at guard vs. tackle, I preferred him at guard. He has a massive frame and wins by staying low at the point of attack. He is a powerful run blocker and consistently sets an anchor by swiveling his hips and driving through the defender.

If the Vikings added Moton, they would get a player they could develop to play both guard and tackle. He would be a swing style player that could evolve into a future starting tackle down the road. He was well-coached at Western Michigan and is a smart player. I want to see him work on his footwork because he had the tendency to be very sloppy at times. It allowed defenders to get him off balance as he wavered with his base. Moton has all of the tools to be successful, but needs improved footwork to take the next step. His ceiling is very high and he could immediately start at guard, with the flexibility to shift to tackle if an injury apocalypse occurs in 2017.

Jabrill Peppers- S/LB/CB – Michigan
This is probably a bit of a stretch, but many draft experts see Jabrill Peppers sliding down the draft board. If he’s on the board, it meshes with the mantra of taking the best player available. Peppers is small, but his athleticism is off the charts. Mike Zimmer would find so many ways to utilize his superior skill-set in the defense. He could be placed in specific nickel packages and is position flexible.

I can see him playing slot cornerback because of his tackling ability. He is fantastic in run support and isn’t afraid to stick his nose into the running game. People are getting hung up on the fact Peppers had just one interception at Michigan. They question his ball skills and ability to instinctively react when the ball is in flight. However, he was placed all over the field in college and I think when he finds a solid role, and receives NFL instruction, he can develop those skills. I would put Peppers at slot corner in this defense, but many sub-packages could be developed to get him on the field. He can also be insanely valuable in the return game as the Vikings look to replace Cordarrelle Patterson. You can’t pass up this type of athleticism and versatility if it’s available when pick 48 is on the clock.

Budda Baker- S- Washington
If the Vikings selected Budda Baker at 48, they would solidify the safety spot next to Harrison Smith. The team needs to find a safety that can be placed single-high when Smith slides into the box. If the team could add a coverage safety that can play on an island, it would maximize what George Edwards and Mike Zimmer can do on defense. Budda Baker perfectly fills this void. He has the speed, ball skills, and instincts to handle the deep half of the field. He is on the smaller side, but Baker can overcome this by getting into an NFL strength and conditioning program.

Baker also is skilled as a blitzer and can be used in a variety of ways to tap into his explosiveness as an athlete. I’m worried about how he’ll stack up in coverage with bigger tight ends, especially if he needs to be flexed into the slot. However, he can overcome these deficiencies because of how instinctive he is as a player. When I watched Washington play this year, Baker was the best player on that defense. He should be around when the Vikings select at 48, if the team wants to patch a spot they’ve grappled with in recent seasons.

Curtis Samuel- RB/WR- Ohio State
The Vikings might be able to make this selection with one of their two third round picks. Curtis Samuel hasn’t been a name discussed by many people in the Vikings mock draft community. He is a player that can do it all as a hybrid running back/wide receiver. Samuel has excellent athleticism and can return kicks as well. He essentially is the style of player Minnesota was hoping to get with Cordarrelle Patterson.

He is someone who can do a variety of different things in the system. Samuel can be moved around based upon the specific matchup each week. He can line up in the slot or come out of the backfield. Not to mention, he has shown an ability to get separation at the top of his routes. I want to see him catching passes outside of his frame because he tends to let the ball play him. He averaged 7.7 yards per carry as a running back and can be an impact in this capacity. Samuel would have solid hands coming out of the backfield and could be a threat because of his speed and open field play-making ability. His route running out of the backfield is solid and he can play two positions well. Mike Zimmer likes position flexibility and Samuel can do it all if he joins the team.