Notebook: A complete team effort lifts the Vikings over Arizona 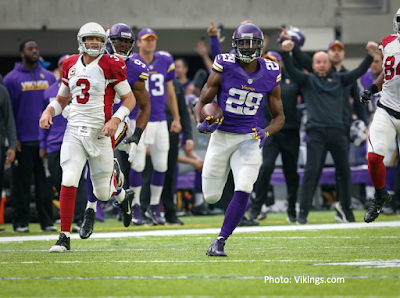 The Vikings snapped their four-game losing streak by picking up a gritty 30-24 win against the Arizona Cardinals. Daniel House analyzes the victory.


The Vikings snapped their four-game losing streak by picking up a gritty 30-24 win against the Arizona Cardinals. Minnesota scored touchdowns on offense, defense, and special teams to fuel the victory. The pass rush came alive in the second half and allowed Minnesota to get after Arizona quarterback Carson Palmer. Despite a late comeback effort by the Cardinals, a 72-yard punt by Jeff Locke and a huge sack by Danielle Hunter on fourth down lifted them to a much-needed win over Arizona.

Take a dive inside my notebook to re-live all of the momentum swings:

Bradford is efficient in the system
Sam Bradford definitely has benefited from the quick passing in Minnesota’s offense with Pat Shurmur calling the plays. He has completed high percentage passes and it has allowed the offense to get into a better rhythm. Towards the end of the game, the offense started to get conservative and went away from what they were doing well. They tried to force some runs and it set them in long down situations. Bradford completed 20 of his 28 passes for 169 yards and a touchdown. He nicely placed a throw to Adam Thielen who made a spectacular back shoulder catch for a 16-yard touchdown in the first quarter. Bradford didn’t need to be flashy and found his receivers in the screen game and on the short passes in soft zones of the coverage. Bradford had some pressure applied on him in the fourth quarter, taking two hard sacks. He fumbled and Arizona would score a touchdown on their next drive. It pulled the Cardinals within six points, but the Vikings defense managed to hold onto the lead.

Issues still face the running game, protection lapses in the four quarter
The Vikings did get a good push on two short yardage situations to get first downs, but they still had trouble running the ball consistently. There were several moments where the running backs had to create yardage with defenders already in the backfield. In addition, the rushers also left some yardage on the field by not following their blocking. The Vikings had trouble running the ball at the end of the game and were forced to pass in critical situations. Teams can stack the line of scrimmage and take away the run because the offense has become predictable. Sam Bradford generally is under center or an extra lineman enters the game to help get a good push. Not to mention, the play-action passing game isn’t causing the defense to respect the run. The “Wild Cat” formation had some success in this game and the Vikings managed to average three yards per carry, which still isn’t a sufficient number.

The offensive line allowed some pressure in the fourth quarter that could have been costly in this game. T.J. Clemmings was beaten by Chandler Jones and Sam Bradford was stripped. Arizona recovered and scored a touchdown to pull the game within one score. Kyle Rudolph also didn’t chip on several players and was overpowered in pass protection. The Cardinals had just two sacks, but the Vikings again masked their protection issues with more quick passing.

Thielen makes some tough grabs, Patterson is so valuable
Adam Thielen ran some beautiful routes in this game making a few tough grabs as he dove for passes. He has such reliable hands and can get open on defensive backs in critical situations. Thielen can also pick up yardage after the catch, which makes him even more valuable. He and Stefon Diggs have been the most consistent pass-catchers in the Minnesota offense this season.

In addition, Cordarrelle Patterson is making a strong case for a contract extension. He is contributing on offense and had four catches for 53 yards in this game. Two of those grabs were huge receptions to pick up critical first downs. He has been making plays after the catch and the Vikings have been utilizing his skill-set in space. Patterson is at his best when he can get a head of steam going north and south. He has been valuable over the last few weeks and continues to perform at a high level on kickoffs. Patterson had a 104-yard kickoff return touchdown to start the second half, shifting the momentum in the direction of the Vikings. He is making plays and contributing, which is what many people have been waiting to see.

The pass rush comes alive
The biggest difference in this game was the pass rush for the Vikings. They had four total sacks, three of which came in the fourth quarter. The defensive line had trouble closing on sacks in the first half, but managed to get home in the fourth quarter. Arizona was forced to pass and the Vikings pinned their ears back, bringing pressure to cause headaches for Carson Palmer. What’s more, the Vikings had a whopping 15 quarterback hits in this game. They got after Palmer and forced him to release the ball early.

Minnesota is at their best when they can rush the passer. This was the first time everyone witnessed them dominate the line of scrimmage for quite some time. Jeff Locke’s 72-yard punt was a key moment in this game. It pinned the Cardinals on their own 13-yard line and the Vikings brought a massive amount of pressure. A personal foul penalty on Tom Johnson gave the Cardinals a first down on a fourth down stop. However, Palmer was sacked by Danielle Hunter to end the game a few plays later. Hunter had several moments in this game where he simply bullied the offensive lineman to deliver a sack or quarterback hit. The pass rush needs to build off this performance as they travel to Detroit next week.

The linebackers are still struggling
David Johnson still had a substantial amount of yardage in this game, averaging 4.7 yards per carry on the ground. The Vikings linebackers had trouble wrapping up and there were several moments where Anthony Barr and Eric Kendricks lunged at the ball carrier. Johnson ran through tackles and picked up additional yardage. The team did clamp down against the run in the second half though. They allowed just 25 rushing yards on six carries in the second half and it was the difference in the game. Arizona was forced to pass more and the Vikings brought additional pass rushers to cause disruptions up front.

The Vikings allowed David Johnson to tally 57 yards on 7 catches through the air. The linebackers had trouble covering underneath crossing routes in this game. Jermaine Gresham ran through tacklers to pick up a 29-yard touchdown late in the second quarter. It pulled the Cardinals within three points at the half and was the type of big play that haunted the Vikings in previous weeks. You have to wonder whether injuries are taking a toll on Kendricks and Barr this season.

Rhodes Closed
This might be the best game Xavier Rhodes has played as a pro. He intercepted a Carson Palmer pass and returned it for a 100-yard touchdown. This play became the longest interception return touchdown in Minnesota Vikings history. Later in the game, Carson Palmer lofted a pass deep and Rhodes made a diving interception. Rhodes had a dominating day in coverage and made several big tackles too. According to Pro Football Focus, Rhodes was targeted just 7 times, but Carson Palmer had a quarterback rating of 0.0 on those throws. It truly was “Rhodes Closed” on the outside and his dominating performance was a huge reason the Vikings won this game. At the end of the season, it is hard to imagine Rhodes won’t get paid for his fantastic performance this year.

Special teams come up clutch
The Vikings two special teams blunders included a 49-yard kickoff return and a blocked extra point. Aside from those mistakes, the unit made a huge impact today. They beautifully blocked for a 104-yard Cordarrelle Patterson kickoff return touchdown to open the second half. Not to mention, Jeff Locke boomed the best punt of his career in the biggest moment of this game. His 72-yard boot pinned the Cardinals on their own 13 and allowed the Vikings to play more aggressive with the pass rush. Shifting field positon is so critical and Locke has been doing a great job with it this year.

What’s Next?
The Vikings will travel to Detroit for a Thanksgiving showdown with the Lions. Kickoff is at 11:30am on Thursday. It will be a huge game as the Vikings battle for the NFC North lead.