Notebook: The Vikings stumble in Philadelphia, fall to 5-and-1 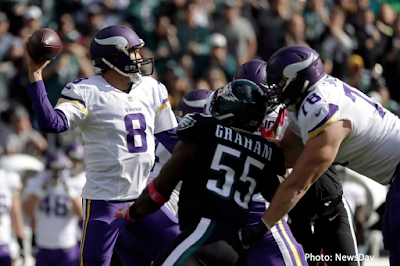 The Vikings couldn't get anything going on offense as they picked up their first loss of the season in Philadelphia. Daniel House analyzes the game and provides his insight from the 21-10 loss.

A 5-0 Vikings team entered Philadelphia with their sights set on continuing their winnings ways. However, this game didn’t provide many positive highlights. The offensive line was gashed for six sacks and 12 quarterback hits. Sam Bradford was running for his life and really struggled to handle the pressure that was thrown his way. Philadelphia caused a ton of headaches up front and Minnesota couldn’t respond. A muffed punt, four turnovers, poor red zone offense, and a terrible performance on the offensive line had the Vikings spiraling out of control. The defense had four total takeaways, including three in the first quarter, but the Vikings offense was far too anemic. This team was dealt a massive reality check against an Eagles team that dominated them out of the bye week. Now, it all comes down to how the Vikings will respond as they travel to Chicago for a Monday night matchup with the Bears next week.

Until then, take a step-inside my post-game notebook and see where it all went wrong during this 21-10 loss.

Bradford has an off day
It is pretty hard to evaluate the performance of a quarterback when the offensive line is allowing pressure like they did in this game. Sam Bradford was stripped twice and threw an interception as his arm was hit by an an on-charging defender. T.J. Clemmings was beaten badly and Bradford’s arm was swiped as he tried to place a pass through a tight window in the end zone. On the two strip sacks, recently signed left tackle Jake Long hardly blocked the edge rusher and Bradford was stripped from behind. Long didn’t start the game, but rotated into the offensive line for a short time. After the miscues, he left the game and the coaches put T.J. Clemmings back on the left side and Jeremiah Sirles at right tackle. It didn’t help. According to Fox Sports, Bradford was pressured on 19 of his total 45 dropbacks. He finished the day completing just 24 of his 41 passes for 224 yards, a touchdown, and one interception. These numbers were far worse before the Vikings padded their stats with some easy checkdowns and garbage time yards. Bradford had no time to even think and he appeared to be off a few times too. He missed several open wide receivers and has limited mobility to escape pass rushers to buy more time. Credit the Philadelphia defense for bringing plenty of pressure and dominating the line of scrimmage. They exploited the weakness the Vikings have on their offensive line and many teams will try to attack Minnesota like the Eagles did in this game.

The running backs do their best, must be better as pass protectors
There were moments in this game where the running backs actually ran the ball well. For the most part, the offensive line still struggled in the running game and many of the yards Jerick McKinnon and Matt Asiata had were because of their ability to create yardage when defenders are already in the backfield. The Vikings had 93 total rushing yards, but they couldn’t move the ball through the air. The offensive line couldn’t hold a block and the wide receivers had a few drops. Charles Johnson couldn’t make a contested catch, tight end Kyle Rudolph had two drops, and Adam Thielen had a pass fall out of his grasp. You know it is a really bad day at the office when the always reliable Marcus Sherels muffs a punt near the end of the game. Minnesota played very sloppy and their inability to protect Bradford and make plays through the air was costly against an Eagles’ defensive line that dominated the line of scrimmage. The running backs have to do better in pass protection too. The Eagles safety blitz packages and both Ronnie Hillman and Matt Asiata were destroyed. Asiata had a really bad day as a pass protector.

The offensive line is really bad
Moving forward, the offensive line is easily the biggest area of concern for this team. When I left Mankato in early August, I expressed my concern about the offensive tackle depth and it is now showing. T.J. Clemmings can’t set an anchor and deliver a strong punch at the line of scrimmage. Jeremiah Sirles had similar problems and looked as if he never practiced the fundamental aspects of playing the offensive line position. Both Clemmings and Sirles have the tendency to lean and get caught in terrible position. Analyzing them at the surface, this appeared to be a problem again. The offensive line had zero physicality up front and Brandon Fusco had another bad game in the interior. He was getting worked at the point of attack and cannot gain leverage at all. The Philadelphia defensive line played with more energy and physicality up front and Mike Zimmer called their performance embarrassing after the game. The offensive line has to figure this out if the Vikings want to be legitimate contenders in the league. Six total sacks and 12 quarterback hits is not acceptable and the Vikings have seven days to figure it out before they travel to Chicago for a matchup with the Bears.

The defensive creates takeaways
The defense had three takeaways in the first half and the Vikings couldn’t get any points off of them. Andrew Sendejo had an interception and couldn’t get into the end zone, but set the Minnesota offense up inside the 5-yard-line. It didn’t matter. A 1-yard run, a false start penalty, an incomplete pass, and an interception squandered the opportunity to score points. On the next possession, running back Darren Sproles fumbled the football and the Vikings recovered inside the Philadelphia 20-yard-line. Again, the offensive line couldn’t protect, Bradford was strip sacked, and the Eagles got the ball back. There’s more! The Eagles threw an interception on their next drive and the Vikings couldn’t get any points off of it again. Minnesota actually had a 3-0 lead at one point, but a 98-yard kickoff return touchdown by Josh Huff changed the momentum of the game.

The Vikings would fumble again and it led to an Eagles field goal. A roughing the kicker penalty on Harrison Smith gave the Eagles an opportunity to try a 2-point conversion and they were successful. After this point, the offense totally fell off the map. The Vikings had three opportunities to score in the red zone during this game and they didn’t come up with any points. Yes, they added one red zone score in garbage time, but I’m not factoring this into the equation. Late in the game, the Vikings couldn’t get 1-yard on third and fourth down inside the 10-yard-line. The offense was incredibly anemic and their inability to score put a strain on the Vikings defense. Minnesota had four total takeaways on defense and surrendered just 21 points, but still lost the game. The defense gave the offense so many opportunities to be successful and Minnesota couldn’t take advantage. Philadelphia had four turnovers and the Vikings couldn’t capitalize off of them.

The game plan was different
The Vikings totally shifted their offensive philosophy and went away from what they were doing best on offense. Short passing and quick hitters were the strength of the unit through the first five games. In this matchup, offensive coordinator Norv Turner called so many deep drops and extended roll-outs. This didn’t make sense. Especially considering the amount of trouble the Minnesota offensive line was having in pass protection. The Eagles really schemed the Vikings well and forced them into offensive situations they haven’t needed to overcome this season. Sam Bradford looked very uncomfortable in this game, but who wouldn’t with an offensive line that performed this bad? The fact this game came out of a bye week makes it even more frustrating. Since 2010, the Vikings are 1-6 following bye weeks. They looked unprepared to attack this Philadelphia defense and the Eagles dialed up packages to get this offense frustrated.

The offense is going to have to win some games by scoring points and protecting the quarterback. Defensively, there isn’t much more the Vikings can do. Jayron Kearse had a rough day in the back end when he replaced an injured Andrew Sendejo, but mistakes as a result of inexperience are expected from a young player like him. The offense put together an incredibly poor performance and the Eagles looked more prepared to attack the weaknesses the Vikings had on offense.

A reality check?
This is probably the wakeup call the Vikings needed. No team can coast to victories in this league. You can’t have a lapse in focus and this game was an example of it happening. Under the Mike Zimmer regime, the Vikings have never put together two terribly poor performances in back-to-back weeks. It is all about how you bounce back and handle the adversity. Of course, fixing the problems on offense, and particularly, on the offensive line should be at the front of the improvement agenda. This defense can’t win football games by itself and putting together some offensive success is going to be critical when they play against more quality opponents down the stretch.