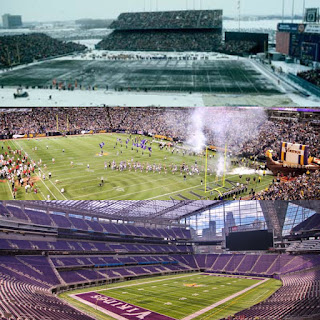 On Sunday afternoon, the Vikings will open the gates for their first game at the brand-new U.S. Bank Stadium. Daniel House previews the matchup vs. the San Diego Chargers and gives everyone some areas to watch closely.


On Sunday afternoon, the Vikings will open the gates for their first game at the brand-new U.S. Bank Stadium. From the cold and snowy days at Metropolitan Stadium, to the blistering crowd noise of the Metrodome, U.S. Bank Stadium will usher in a new era of Vikings football.

U.S. Bank Stadium is sure to provide the same home field advantage with some of the best fan amenities in sports. It is only the third preseason game, but the atmosphere will be electric and the fans will have the chance to see the new stadium they have waited over a decade for. Aside from the glitz and glamour of the new stadium, this will be the final tuneup for starters and the battle for roster spots will reach an all-time high.

For more, take a look inside my game preview:

Bridgewater likely back in the fold
After missing last week's game with a rumored sore shoulder, quarterback Teddy Bridgewater is expected to play against the San Diego Chargers. When asked this week if he would play vs. the Chargers, Bridgewater responded, "of course." It is unclear how much he will play, but in a final tune-up before traveling to Tennessee, one would believe he could see extended action. Bridgewater flashed in the first preseason game, throwing a 49-yard touchdown pass to Charles Johnson and connecting with Adam Thielen on a strike across the middle. This game will be another opportunity for Bridgewater to become more cohesive with his wide receivers and offensive line during live action.

Getting the ground game going
The Vikings are averaging just 2.5 yards per carry on the ground in the preseason. As I have noted in previous posts, the offensive line had trouble getting a good push during the first two games. In the running game, the opposing defensive line has been winning the line of scrimmage. Running back Jerick McKinnon hasn't had many lanes to run through during the preseason. Additionally, there hasn't been a sufficient amount of positive rushing plays. The offensive line needs to bring more physicality and continue to improve on the ground. Mike Zimmer indicated the unit improved last week vs. Seattle and his words of support are encouraging. In the regular season, it won't hurt to have Adrian Peterson back on the field either. Having the best running back on the field opens up so many opportunities as an overall offense. Nonetheless, seeing an improvement every week of the preseason from the offensive line will go a long way towards building a solid running game for the regular season.

Another look at the offensive line mix
The coaches are getting closer to putting their complete offensive line starting lineup in pen. Joe Berger and John Sullivan are continuing to rotate at the starting center spot in practice and the competition still appears to be open. The right tackle spot seems more solidified after an improved performance from Andre Smith last week. Matt Kalil has been battling an injury this week and he may be unable to play. If that is the case, it means the Vikings won't have a single preseason game where their entire potential first-team unit plays together. Ideally, the third exhibition game is a time the coaches would like to have the complete starting lineup on the field to play together before the games count. However, T.J. Clemmings will likely play left tackle with the first-team unit. Clemmings and Jeremiah Sirles must perform better to prove they can handle the swing tackle duties on this roster. The Seattle film was definitely not the best showing for either one of them.

Showing growth in run defense
All three defensive line units have struggled this preseason against the run. This was a reoccurring theme last year and is an area that must be improved in 2016. The defense needs to place opposing offensive units into third-and-long situations as much as possible. This statistic was slightly better last week, but the team still allowed far too much yardage on the ground. Over the first two preseason games, the Vikings have surrendered 138.5 yards via the running game. A 4.5 yards per carry average is not a positive number for a defense. The defensive line needs to hold their blockers and the linebackers need to a better job at penetrating through the gaps. The linebackers have played slightly tentative thus far and it hasn't helped the defense. The first-team unit has been without defensive tackle Sharrif Floyd and linebacker Eric Kendricks so far in the preseason. It is unclear whether either of them will play since they returned to practice this week. Those two players are integral aspects of the defense and play a huge role in making run stops. I don't think the increased yardage allowance on the ground is anything to panic about until it starts happening in the regular season. The defensive calls aren't really favoring run blitzing or scheming to stop anything on the ground either. One has to take some of the observations on defense with a grain of salt this early in the season.

The safety battle heats up
The safety battle will be coming to a close in a few days and at this point it seems the competition will come at the depth spots. Andrew Sendejo has seen the majority of first-team work and it doesn't seem likely he won't be the starter for regular season action. Michael Griffin might stay around for depth, but it will be dependent upon how confident the coaches are with Anthony Harris and rookie Jayron Kearse. With Harris missing extended time due to an injury, his spot doesn't seem completely safe. He will need to get back on the field and show his offseason growth in the next two games. Kearse played pretty well in the first preseason game, but took a step back last week against Seattle. It comes down to how much the coaches value the dependability of Michael Griffin. In the event Andrew Sendejo was injured, Griffin could enter the game and provide experience to the defense. In 2015, Anthony Harris seen limited exposure in games, but has more familiarity in the scheme than a young player like Jayron Kearse. It is unlikely they can afford to keep five safeties, so the final two preseason games will be critical for players like Kearse and Harris who are fringe 53-man roster candidates. If one of them went on the practice squad, they likely could be claimed and those are the tough decisions that might need to be made by the front office staff.