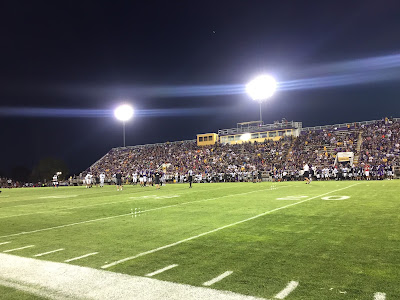 Over 10,100 fans packed Blakeslee Stadium in Mankato, MN for the annual Minnesota Vikings night practice. Daniel House takes you inside his notebook for day eight of Vikings training camp.


Over 10,100 fans packed Blakeslee Stadium in Mankato, MN for the annual Minnesota Vikings night practice. The team put together a fantastic performance during one of their best practices of training camp. Teddy Bridgewater was firing on all cylinders, the offensive line kept the pocket clean, and Jayron Kearse made another splash.

For more, take a look inside my practice notebook:

Bridgewater firing on all cylinders, Hill is dealing
Quarterback Teddy Bridgewater had his best training camp practice in front of the 10,100 fans in attendance. Bridgewater made every underneath throw and connected on deep balls with ease. Teddy found Stefon Diggs on a deep ball up the sideline over Terence Newman. He also added a touch fade to Adam Thielen over the top of Xavier Rhodes. Teddy perfectly placed the pass and hit Thielen in stride. He also fired a pass into a tight window over Harrison Smith for a touchdown to Kyle Rudolph in goal-line work. One of the two deep balls he missed was to an open Stefon Diggs who beat the defense over the top. The second came on a pass up the sideline for Diggs. Teddy put the throw on the money and Trae Waynes barely got his hands on the pass to knock it away.

Bridgewater connected frequently underneath with both Kyle Rudolph and MyCole Pruitt. He even found Charles Johnson on a couple crossers. Bridgewater made almost all the throws tonight and put his improved deep ball on display for the audience. The only portion of practice that looked shaky was in the red zone period. Teddy lofted several balls into the end zone that were incomplete. Two were intercepted out of bounds and three were deflected. However, one was the result of Thielen slipping and another pass missed the out stretched arms of Kyle Rudolph. It appeared some of this red zone work might have been scripted for Bridgewater to gamble by lofting it into the end zone. This is nothing to worry about because Teddy Bridgewater put together a solid performance tonight.

Shaun Hill must have fueled up the oil can in his arm before practice. His passes finally had some zip as he fired them towards the sidelines. He gunned a throw on an out to Isaac Fruechte towards the sidelines. Hill even fired a perfect deep ball on a nine route to Adam Thielen that was dropped. Hill looked much improved and maybe needs the team to turn on the lights for all of their practices.

Joel Stave was intercepted on a pass that bounced off the hands of Terrell Sinkfield and into the arms of Jayron Kearse. Stave didn't throw the ball as poorly either and perfectly threw a deep ball to Terrell Sinkfield over Tre Roberson. Roberson was called for pass interference on the play or the pass would have been caught.

The backup quarterback play was encouraging tonight, but only time will tell if it was simply a mirage.

Peterson is running ferocious
Running back Adrian Peterson was hitting the hole hard and following the blocking of his offensive line. One run by Peterson in team drills came as Adrian ran behind Alex Boone. Boone opened up a lane and tight end David Morgan laid a nice block out of the backfield. Peterson was hitting the hole and cutting on a dime. He looked like he had some of his familiar speed back and is ready to lower the shoulder and make some plays against opposing defenders.

Recently signed running back Kevin Monangai received some gasps from the crowd as he executed a beautiful 45-degree cut in traffic. Monangai showed some nice speed and vision on his runs and will be worth evaluating in future practices.

Treadwell makes some contested catches, Diggs goes deep
Laquon Treadwell made two of his best catches of training camp and he was in traffic for both of them. Treadwell beat Xavier Rhodes on an out and caught the ball in traffic with Rhodes all over him. He followed it up with another tough reception on Jabari Price. Treadwell caught passes that we were accustomed to seeing on his Ole Miss tape. It was encouraging to see this step forward from the young wide receiver.

Stefon Diggs ran a beautiful route up the sideline to haul in a deep pass from Bridgewater. Diggs also got open on a deep cross and nearly hauled in the grab over the top of the defense. The pass was slightly overthrown. Additionally, Diggs flashed his athleticism as he hauled in a slant and ran the ball all the way into the end zone. He got a few claps for finishing the play with a score.

Finally, Diggs hauled in a diving catch in QB/WR/DB drills from Bridgewater with Jayron Kearse running step-for-step with him. Diggs is getting open frequently and his footwork at the line of scrimmage is something to marvel at during training camp.

Rudolph continues to look great, Morgan a road grader
Kyle Rudolph hauled in a one-handed catch in the flat with Anthony Barr ready to make the play. Rudolph was catching passes in the soft spot of the zone and Teddy Bridgewater looked extremely comfortable throwing the ball his way. Teddy said after the scrimmage that Coach Zimmer told him to trust Kyle more in the offense at the end of last season. It is clear Bridgewater has no problem firing a pass towards Rudolph anywhere on the field.

David Morgan flashed his run blocking skills throughout the practice. He opened up a nice hole for Adrian Peterson out of the backfield and sealed the edge on another run in team drills. Morgan not only can run block, but has great hands. He hauled in a nice catch in the soft spot of the zone against cornerback Mackensie Alexander.

Offensive line shuffles again with Fusco out
Brandon Fusco was injured during goal line work at yesterday's practice. Today, he missed the morning walkthrough/night practice and Joe Berger played at right guard. John Sullivan started at center and Andre Smith saw the action at right tackle. In his press conference, Coach Zimmer didn't elaborate about the injury, but added that he wasn't concerned. Fusco missed the night practice with the injury and it is unknown when he will be ready to return. Coach Zimmer was impressed with Fusco before the injury. He said, “That’s probably the best I’ve seen him look since I’ve been here. Doing a good job, been physical, better in pass protection. So he’s looked a lot better.’’

Offensive line holds up
For the most part, Teddy Bridgewater had a clean pocket to step into. In fact, the offensive line did a great job protecting tonight. Matt Kalil handled Griffen rather well and there were only two moments in pass protection where I felt Kalil was beaten. The entire unit protected well and I was particularly impressed with Andre Smith who didn't allow much pressure off his edge. The interior of the offensive line held up well and Joe Berger filled in great for Brandon Fusco. John Sullivan wasn't getting put on skates and actually held up well. Alex Boone is the highlight of the group in every respect. Boone is mauling defensive lineman and linebackers in the running game and is a rock in pass protection. When the Vikings need yardage in the running game, they can definitely rely upon Boone to open a hole. The offensive line kept the pocket pretty clean and that's a huge vote of confidence for the Vikings offense and the unit as a whole.

With the second team, T.J. Clemmings had a few problems, but it wasn't significant. Shaun Hill had some time to make throws and that was because the pocket for the most part wasn't terrible.

Kendricks leaves injured, Cole replaces him
Eric Kendricks left the practice with an injury and did not return. It is unknown what the injury was or its severity, but Audie Cole filled in at middle linebacker with Kendricks out. Cole is a key contributor on special teams and it is evident he is pretty high on the team depth chart.

Linebacker Brandon Watts had an impressive stand in goal-line work and blew up C.J. Ham in the backfield. He also filled the hole nicely on a Jhurell Pressley run. Watts has stayed healthy during camp and left a nice impression in the night practice. Linebacker Emmanuel Lamur also had a nice run stop in the same drill. The defense looked stout against the run in the goal-line period.

Kearse gets another interception
Jayron Kearse hauled in an interception that tipped off the hands of wide receiver Terrell Sinkfield and into his arms. Kearse showed off his speed and long strides as he returned the interception up the field. Anthony Harris worked with the second-team alongside Michael Griffin and added one pass defensed. Antone Exum was beaten once in WR/DB drills, but he spent most of time working against the third-team tonight. Additionally, Andrew Sendejo didn't stand out as playing good or bad, but his most recent practices have been nothing to write home about. The safety battle is still wide open and it appears Jayron Kearse added another strong artifact to his resume tonight.

Mackensie Alexander shuts the door, Newman has a tough night
Mackensie Alexander played great during the WR/DB drills and locked down Jarius Wright on a comeback. He also brilliantly knocked away a pass intended for Moritz Böhringer. It appears Alexander is adjusting to the scheme and the rigors of the NFL as he practices more.

Terence Neman had a tough night as he was beaten underneath by Charles Johnson and over the top by Stefon Diggs. Wide receivers have been using speed to beat him off the line of scrimmage. They are setting him up and he doesn't have the ability to athletically recover.

Trae Waynes was all over wide receivers and had a nice pass breakup on Stefon Diggs up the sideline. Waynes is improving every day and could challenge Terence Newman for the starting role if he continues to make strides.

Walsh goes 7-for-8 on field goal tries, Locke gets some punting in
Kicker Blair Walsh went 7-for-8 on kicks from 33 to 51 yards. His one miss came on a 49-yard attempt that he missed wide left. Walsh also worked on his punting skills and showed off a weird spiraling punt in a drill.

Jeff Locke punted several times and his punt lengths varied. From my angle, it appeared his punts all ranged from 50-65 yards with most of them being in the upper 50-yard range. Locke still punts a little inconsistent, but it wasn't nearly as significant as I would have imagined. He hasn't kicked much in camp, so the preseason will be a great way to evaluate him and the entire special teams unit closer.

What's Next?
The Vikings will have the day off on Sunday and return to the practice field on Monday for a morning walkthrough from 10:30-11:30am and an afternoon full-padded practice from 2:45-5:10.