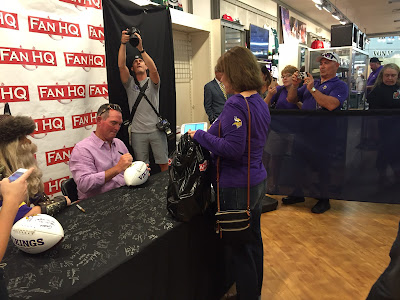 Mike Zimmer greeted fans and signed autographs to benefit the Mike Zimmer Foundation and the More Than Words campaign.

The fans piled into Fan HQ in Eden Prairie Center on Thursday night to the sold-out Mike Zimmer More Than Words autograph session. Vikings head coach Mike Zimmer signed autographs and took pictures with fans for an hour. Zimmer smiled, joked, and personally greeted each fan who came to the signing. One hundred tickets were sold and two auction items went up for bidding over the last few weeks.

“When you can put a charity behind the appearance, how easy it that to promote? People come out to our store and they are excited about what we are doing," Hagglund noted. "All of it is going to a good cause and it is fun to promote. It’s just a blast.”

Vikings fan "Sir Gruben" of the VWO won the VIP auction and was Coach Zimmer's right-hand man during the signing. He had a personal meeting with Zimmer and sat with him as he signed autographs for all of the fans in attendance.

Eleven supporters purchased VIP packages which allowed them to get a signed item, a picture with coach, and a quick conversation.

Others purchased a package which featured a picture with Coach Zimmer and one autograph. The line stretched around the center of the mall and fans waited patiently for the chance to get up close and personal with the Minnesota Vikings head coach. Fans flew into Minnesota from as far as Cincinnati, South Carolina, and Canada for the chance to support the Mike Zimmer Foundation.

The generous donation from Fan HQ, combined with the support of fans will help continue the legacy of Mike's late wife, Vikki Zimmer. Vikki passed away unexpectedly in 2009 and the Zimmer family launched the Mike Zimmer Foundation to continue her giving spirit.

“Everything we are doing with this foundation is to honor my wife and hopefully help kids in Minnesota," Mike Zimmer said. "The fans have been great to me and the more I can get out and help and do what I can is great."

The donations made online through the More Than Words campaign and the autograph signing will leave a lasting impression on the local Twin Cities community. The current donation total of just over $12,000 will support the foundation mission "to better lives of children in need." The Zimmer family may use the funds for a scholarship or another charitable giving intiative.

Mike Zimmer Foundation Executive Director Corri Zimmer expressed her gratitude towards the fans, blogs, and those with the Vikings who have rallied behind the More Than Words campaign.

“[The blogs and fans] have been great and it has helped us so much," Corri Zimmer explained. "We want to give back to Minnesota, which has been so great to my dad and our family."

Mike Zimmer is extremely appreciative for the support of Vikings fans, those within the organization, and everyone who attended the Fan HQ event. He sees his foundation as an outlet to impact the local community and fans who encourage his team every Sunday.

“One of the things we try to do as a football team is we want our fans to be proud of us and how we represent ourselves on the field, off the field, and the way we play the games and things like that," Zimmer explained. "It’s important for us -- as much as they give to us, we give to them.”

Donations to the More Than Words campaign will be accepted through August 9th and you can donate by following this link. You can learn more about the goals of the foundation by reading this story.