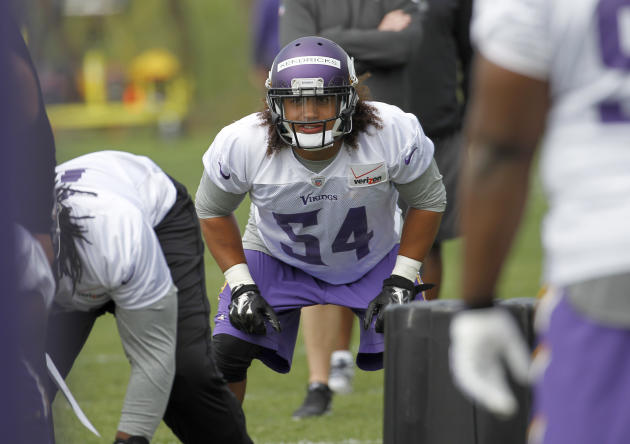 For the first time in recent seasons, the linebacker group is finally beaming with talent and athleticism. Could the addition of Eric Kendricks be enough for the Vikings' defense to take the next step?

Previously, the words linebacker and Minnesota Vikings were synonymous with 'poor depth.' After drafting an impact player like Anthony Barr in 2014 and developing Gerald Hodges for another year, the linebacker position has become less and less of a weakness. In recent seasons, there has always been a hole at the middle linebacker spot. The front office finally addressed this situation by adding linebacker Eric Kendricks in the second round of the 2015 NFL Draft. Kendricks is a top-tier player who will make an immediate impact on the Vikings' defense. The coaches have a chance to include Anthony Barr, Eric Kendricks, and Gerald Hodges in the same defensive package. That has athleticism written all over it. The biggest question mark will be how the team handles Chad Greenway in 2015. Will he split snaps with Gerald Hodges or will Greenway remain the weakside starting linebacker? Aside from that portion of the depth chart, players like Audie Cole, Mike Mauti, Casey Matthews, Brandon Watts and Brian Peters will be battling for the final roster spots. These players will not only be distinguished by their performance as linebackers, but their ability to contribute on special teams.

Anthony Barr provided a much-needed boost to the Vikings linebacker corps last season. The Vikings spent the number nine selection in the 2014 NFL Draft to select Barr. He was the second-highest drafted linebacker in team history and didn't disappoint in his first season. Barr was a reliable tackler who also provided instant help in the pass rush. In training camp, the coaches were practicing packages where Barr was used as a defensive lineman. His athleticism and football instincts are two areas where he separates himself on the field. Barr was continually growing as the season progressed and another year in this defensive system will only take his play to the next level. According to Pro Football Focus, he accumulated 17 pressures, adding four sacks, and four hits over the course of the season. He not only was a pass rusher, but provided stability in coverage and run defense. Barr has portions of his game to improve upon, but he arguably was one of the best rookie defenders in the league last season. If it wasn't for a knee injury at the end of the year, he may have been considered as a Defensive Rookie of the Year candidate.

At 31 years old, Chad Greenway still managed to the finish second in tackles with 115 (78 solo) and was a vocal leader of the linebacker corps in 2014. In Greenway's first year in Mike Zimmer's defensive scheme, he played 12 games at weakside linebacker. With Gerald Hodges seeing some time at the end of the season, the team knows there could be an improvement in coverage and run support. Nonetheless, it is important to have a leader on the field that is of Greenway's caliber. He might see his snaps shared with Hodges, but the coaches have shown no indication that he won't be seeing first-team reps at weakside linebacker. Training camp practices will tell us exactly how the coaches will be rotating the linebackers. The Vikings don't play base defense as much as they used to and with that being said, Anthony Barr and Eric Kendricks can provide an athletic package on the field in nickel situations. That means Hodges and Greenway will likely be battling each other for playing time at weakside linebacker in 2015.

Audie Cole has always been a player that squeaks onto the Vikings roster during personnel decisions. This year, the linebacker group is even more crowded than in years past. Being a versatile player has helped Cole continue to latch onto a roster spot. Mike Priefer has continually expressed his value as a special teams player. He notched two or more tackles on special teams in four contests last season. When Cole has been on the field at linebacker, he has proven his playmaking ability in coverage. Not to mention, he was continually making run stops as a middle linebacker. The key to Cole remaining on the roster will be how he can perform in the defensive scheme, and more importantly, how he contributes on special teams in the preseason. There are plenty of candidates who can provide worthy performance in that avenue and the roster spot will be awarded to the player who is the best fit in both areas.

After injuries started to plague the Vikings linebacker group, Gerald Hodges started to see more playing time in the defensive scheme. Pro Football Focus named Hodges a "Secret Superstar" for the upcoming season. He cemented this status after he performed extremely well over the final four weeks of the season. According to PFF, Hodges earned a +7.5 overall grade over the final four weeks of the season, which ranked third among 4-3 outside linebackers in that span. He also graded average or better in run defense and pass coverage in each game. He definitely could provide an upgrade over Chad Greenway at the weakside linebacker position. Nonetheless, I expect Greenway and Hodges to share snaps in various defensive packages. The combination of Barr, Kendricks, and Hodges could pose an athleticism nightmare for opposing offenses.

Perhaps the most interesting new piece to the Vikings' linebacker group is rookie Eric Kendricks. Kendricks was a first round talent, that somehow slipped to the Vikings' second round selection. He should start at middle linebacker when the Vikings open the regular season in San Fransisco. Kendricks has an extremely high intelligence level and his ability to be instinctive was some of the best among this draft class. The thing I like most about Kendricks is how he covers running backs and tight ends. He blankets them well, but has the instincts to recognize when the ball is being handed off to the running back. Not to mention, his athleticism is very impressive and he can get sideline to sideline in a hurry. The Vikings haven't had a talented middle linebacker of this caliber in some time. Kendricks is the type of player that could surprise the entire league as he makes his transition to the NFL.

The Vikings signed linebacker Casey Matthews to a contract during the free agency portion of the off-season. Matthews is most known for being the brother of Packer's linebacker Clay Matthews. Casey played inside and outside linebacker during his four seasons with the Philadelphia Eagles. He has appeared in all 64 games of his career and started 11 in 2014 as an inside linebacker. Matthews could add even more value within the special teams group. During his career, he notched 39 tackles in that role. On defense, he has been credited with 109 tackles and 2.5 sacks in four seasons. Matthews will be competing hard with Audie Cole to gain a spot on the Vikings' roster.

Mike Mauti is the 'man-crush' for many Vikings fans on the Twitter-verse. To the displeasure of many, Mauti just hasn't been awarded the opportunities to showcase himself on the field. However, with limited appearances in the preseason, Mauti still has managed to cling to a roster spot. Much of this can be attributed to his special teams value. During 2014 training camp, Mike Priefer indicated this on several occasions. Mauti is a hard-nosed player that isn't afraid to stick his head into the pile. Last training camp, you could repeatedly see Mauti's struggles in coverage. With a roster that has more options on the special teams side, this could be the biggest challenge Mauti has faced in recent seasons.

After spending time in the AFL and CFL, Brian Peters finally is getting a crack at the NFL. Peters most recently played in the CFL for the Saskatchewan Roughriders. While there, he converted from safety to linebacker. This proved to be a great decision and Peters accumulated a stat line that was good enough for the Vikings to take notice. In 2014, Peters led the Roughriders with 78 tackles and added 3.0 sacks, 1 forced fumble, and 2 interceptions, including one for a touchdown. During OTA's, the coaches were discussing Peters' progress as both a linebacker and special teams contributor. Brian Peters could be a name to keep an eye on during training camp and the preseason.

The Vikings drafted Edmond Robinson in the seventh round of the 2015 draft out of Newberry. Robinson has phenomenal length (6'3" 245 pounds) for an outside linebacker and is an intriguing prospect. He can get sideline to sideline very well and has proven himself in space. He didn't play against elite competition and you have to wonder if he can handle the learning curve at the next level. Nonetheless, he has the raw skill-set to be a developmental project for the coaching staff. It's not every day you see a linebacker his size with the physical traits he can provide.

Brandon Watts was the craze during a portion of training camp last year. He was seeing snaps with the first and second team during parts of practice. After hamstring problems began, Watts almost became a distant memory. His most impressive trait was his speed and ability to move laterally in a quick fashion. I really liked Watts on the coverage team during training camp and thought this could be a niche for him at this level. However, durability problems caused him to see limited action. If Watt wants to make this roster, he needs to perform well in the preseason, while displaying some durability.

In 2014, the Vikings signed Josh Kaddu to the practice squad in early September. He spent 15 games in that role and was later promoted to the active roster for the final game of the season. Kaddu was a fifth round pick for the Miami Dolphins in 2012 and played college football at Oregon. During his time in Miami, he played in five games and did accumulate any stats. He was released by the Dolphins in 2013, and signed with the Philadelphia Eagles' practice squad. The Eagles released him during roster cuts and he signed to the Vikings practice squad. Kaddu has excellent size for a linebacker and during practices last season, his teammates were talking about the power and strength he can provide. Kaddu is another player to compete in a deep linebacker position group.