Five Things to Watch For Against The Lions 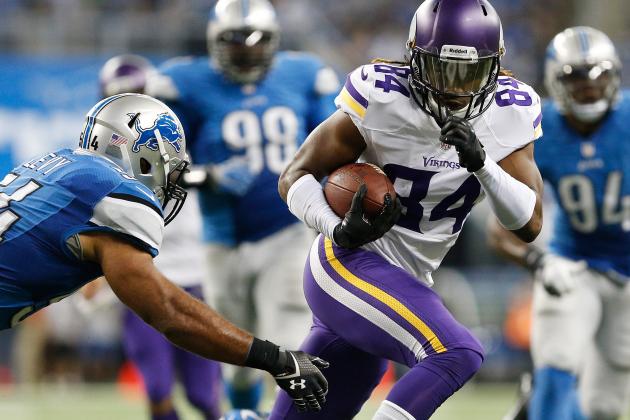 Minnesota will look to rebound against a divisional opponent this week. Daniel House provides five areas of emphasis to watch for when the Vikings square off with the Detroit Lions.

After taking some time to recover from a 42-10 obliteration on Thursday Night Football, the Vikings have a chance to recover in a divisional matchup with the Detroit Lions. Quarterback Teddy Bridgewater (ankle) is healthy for this game and will be making his return. Coach Zimmer has indicated the team has been focusing on the opponent, while working harder to emphasize improvement as a team. The Vikings offense was anemic last week and part of this issue was related to Christian Ponder starting at quarterback. Pair this performance, with the inability to pass protect in certain situations and the offense couldn't sustain drives.

The Lions are entering TCF Bank Stadium with a 3-2 record, fresh off a demoralizing last second home loss to the Buffalo Bills. Detroit has built their defense with a perennial defensive pass rush and it will keep the Vikings offensive line busy. The Lions defense is dramatically improved from teams of the recent past. And historic past, for that matter. They have registered two or more sacks in each of their first five games. Minnesota's offensive line has been a sieve this season and just three teams have allowed more sacks than the Vikings.

On the offensive side of the ball, the Lions offense will likely be without wide receiver Calvin Johnson and running back Reggie Bush. Look for wide receiver Golden Tate and running back Joique Bell to be the go-to replacements for quarterback Matthew Stafford. In order to make a push in this division, the Vikings need to put together a winning streak and the perfect way to begin this task, would be against an NFC North opponent.

Rookie quarterback Teddy Bridgewater will be making his return this week and the Vikings are hoping their offense will benefit. The Minnesota offense couldn't develop a flow against Green Bay and with Teddy making his return, the vertical passing game should open. The goal is to develop a more balanced attack that can add yards through the air and on the ground. This won't be an easy task when they square off with a Detroit defense that is statistically the top group in the league. Their pass rush is getting to the quarterback frequently and the Lions young secondary is performing ahead of expectations. This is aligning to be a great test for Bridgewater and a Vikings offense that has had extra time to prepare for a divisional opponent. If Teddy can complete passes to move the chains, the Vikings can establish the running game early and bring a balanced attack to the field this week.

Wide receiver Cordarrelle Patterson is the best playmaker on the Vikings roster and as of late, he hasn't been used in the offense. He has touched the ball a minimal amount of times and has been primarily used as a decoy in certain offensive packages. Offensive coordinator Norv Turner expressed this week that Patterson would see more touches and that the team was very excited to get him involved in the gameplan. He can be used out of the backfield and through the air in athletic packages that will help his skill-set flourish on the field. The Vikings are without Adrian Peterson and need to find an explosive offensive threat that can handle the load this team is missing during his absence.

Pass protection is the most critical aspect of Sunday's game and if the Vikings are unable to protect Teddy Bridgewater, it will be a a long day for the offense. The Lions front four is one of the most dominant forces in the league and have accumulated an eighth-most 13 sacks this season. Ndamukong Suh and Nick Fairley provide interior pressure and the Vikings have to be able to protect Bridgewater and not allow an overcompensation during the edge rush. If the Lions can't get to the quarterback, more weight is placed on the secondary and they aren't provided with as many free turnover opportunities. Bridgewater will be elusive when he needs to, but the pocket must remain clean and he must have time to make the necessary reads up the field. If the Vikings can hold the Lions to under three sacks tomorrow, they will have a chance to win the game.

The Vikings pass rush has been underwhelming over the last few weeks and it has been directly related to the inability of the defensive ends to make plays off the edge. Everson Griffen and Brian Robison haven't been involved at the early point of the season and it has caused defenses to take advantage of this weakness. If Matthew Stafford is provided with time to make throws, he can be a dangerous quarterback. More importantly, when defenses can't wrap him up and he extends the play, he becomes an extremely dangerous threat. The Vikings can't afford to allow Stafford to become comfortable enough to find his targets up the field. Not rushing the quarterback places a strain on the defensive backs and the Vikings secondary simply isn't playing at the level necessary in the backend to compensate for a limited pass rush.

Getting off the field

The Vikings defense really didn't have many opportunities to prove they could get off the field on third-and-long last week. In the weeks leading up to the Green Bay game, the Vikings defense was unable to prevent big plays that directly resulted in moving the chains on third down. By shutting down the running game and rushing the passer, the Vikings are able to get off the field and allow the offense to kill clock. The Minnesota defense isn't a shutdown group, but when they can make the necessary plays on 3rd down, they can place the ball in the hands of the offense to score points.