The 'Whisperer' of a Defense 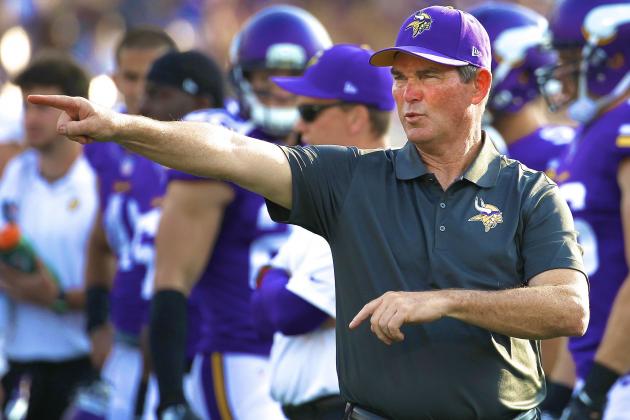 Mike Zimmer has proven himself as a defensive whisperer during his years in the NFL. He might not 'whisper,' but you get the point. Daniel House discusses how different the team is playing under their new head coach.


Vikings head coach Mike Zimmer might not be 'whispering' information when he presents it to his players, but he conveys his message loud and clear. He wants smart, disciplined, and fundamentally sound football players to set foot on the field every week. This message was echoed when the Vikings set foot for their first practice of training camp. Zimmer adjusted his hat, rolled up his sleeves, and played his best impersonation of a gruff high school history teacher. Except, Zimmer has been promoted to principal and the rest of his coaching staff teaches all the other subjects. The hands-on approach has yielded results and the players are responding positively to the new philosophy.

Every coach is consistently working to improve fundamentals and are doing so by making sure each rep is maximized. For example, the defensive backs were having an issue with fundamentals and positioning in coverage. The wide receivers were shredding the defensive backs and secondary coach Jerry Gray quickly worked to alleviate the issue. The next day, he had every defensive back on the field 30 minutes early before the walkthrough and was quizzing the players on certain situations. The hard work was displayed on the field during the afternoon session and the group was praised by the coaching staff for the strides they had made. The preseason has been a way for fans to see the progress with the defense, but ultimately, the full defensive scheme won't be revealed until the team takes the field for the regular season opener against the St. Louis Rams.

Success won't come immediately, but with more work on technique and fundamentals, the defense will begin to head in the right direction. Mike Zimmer has indicated he wants to see a consistent amount of improvement in fundamentals before he gets too 'exotic' with his defense.

"Once I feel like we have the fundamentals down and the techniques down, then you can worry about tricking somebody else or disguising," Mike Zimmer said in a meeting with reporters.

Zimmer will have his work cut of for him in the early portion of his career with the Vikings, but the stats are more favorable than one may think when discussing whether the defense can be overhauled in a swift amount of time. In the past three seasons, five NFL teams have gone from 25th or worse in offensive points allowed to rank top-ten in that category. In 2008, Zimmer inherited an awful Bengals defense that was near the bottom of the league in every defensive category. In just a season of work, he turned Cincinnati into the 12th ranked group in the league.

Considering the Vikings have added a defensive guru like Mike Zimmer, it certainly helps enhance the odds of overhauling the defense. In his 20th year of NFL coaching experience, Zimmer has developed a defensive pedigree among the best in the league. He has been waiting for his chance to be a head coach and definitely has a chip on his shoulder to build a legacy in the league.

Pair Zimmer's coaching abilities with a defensive coaching staff that has an immense amount of experience in the league and the rebuild can be accelerated. Zimmer will find the best way to utilize his players and he is sure to be shuffling them to completely nurture their skill-set.

However, with a young linebacker corps and a group of defensive backs who are adjusting to more man coverage, the growing pains could be high, but there is room for optimism. The pace of practice, the amount information being presented, and the coaching being done on the field is a polar opposite to the previous regime under Leslie Frazier.

Give it time, but it appears the defense is heading in the right direction and has the perfect coach to push players to be their best. These attributes alone, are a breath of fresh air for players, fans, and those who follow the team closely.