Notebook: Late Heroics Prevail in the Vikings 30-28 win over Arizona 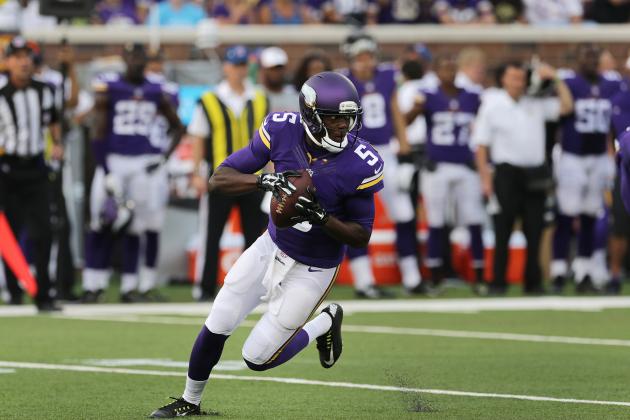 Quarterback Teddy Bridgewater leads the Vikings on an 11-play scoring drive to cap a dramatic 30-28 win over the Cardinals.


The Minnesota Vikings continued their preseason schedule tonight during a matchup with the Arizona Cardinals at TCF Bank Stadium. Energy levels were high and the stands were packed to see many of the reserves battle for roster spots. The first-team offense played for the majority of the first half and the second half of action was closed with a game-winning touchdown drive by rookie quarterback Teddy Bridgewater. The Vikings won the game 30-28 in dramatic fashion during the final live preseason game in front of the fans. I compiled all the notes and let you take a glance into my notebook from tonight’s matchup.

Matt Cassel started tonight’s game and finished 12-for-16, throwing for 153 yards, and a touchdown during one half of action. Cassel also added 30 yards on the ground and more notably kept his eyes down the field and ran when necessary. Matt continued to command the huddle and made the throws necessary in Norv Turner’s offensive scheme. Cassel more importantly distributed the ball to five different receivers and showed he has developed a rapport with Vikings tight end Kyle Rudolph. Cassel found Rudolph on a corner post to the sideline and connected with the tight end for a 51-yard touchdown exchange. It appears Matt Cassel has proven he can handle the rigor of the offense, along with the pressures thrown his way.

Teddy Bridgewater stole the show in the second half of tonight’s game and led the Vikings on an 11-play game-winning scoring drive with just 71 seconds remaining in the contest. Bridgewater was poised under pressure and led the Vikings up the field on three separate passes, hitting Jarius Wright and Kain Colter towards the sidelines and Rodney Smith on a fade up the hashes. Finally, Teddy reached the redzone and lofted a perfect touch pass to the end zone, finding Rodney Smith for the game-winning touchdown. Bridgewater finished the evening 16-for-20, for 177 yards, and two touchdowns. He more importantly showed his ability to play well under pressure, keep his head up the field, and make throws when the game is one the line. All of this action came against Arizona Cardinals defensive reserves, but it is encouraging to see the rookie quarterback lead the team on an 83-yard scoring drive to win the game.

Joe Banyard has had a rather nondescript training camp and preseason, but he came out of his shell in some of his most extensive live action of the 2014 season. Banyard added a 56-yard run and was stopped just short of the goal-line. He added a pass out of the backfield where he shifted and spun past a defender. To improve his cause, Banyard also added a brilliant 44-yard kickoff return, along with several contributions on special teams. This definitely helps the cause for a running back who is treading on a fine line between making the roster or being selected for the practice squad.

The fifth wide receiver spot is up for grabs and the competition amped up tonight following two great performances by wide receivers Adam Thielen and Rodney Smith. Thielen corralled four passes for 54 yards, but dropped a would-be touchdown on a fade from Teddy Bridgewater in the third quarter. Thielen was getting in-and-out of his breaks quickly and was garnering solid separation on the intermediate routes he was running tonight. A dropped touchdown doesn’t help his cause, but you have to believe he still is high on the depth chart at this point. Rodney Smith hauled in the game-winning touchdown pass from Teddy Bridgewater, while adding four catches for 55 yards. He corralled a spectacular 37-yard catch on a fade up the sideline, adjusting his body to make the reception. Smith continues to improve and is playing more within his body, adjusting to the physical demands required to be a wide receiver in this league. This position will be very difficult to trim and the coaching staff will have to decide which direction they want to head. Jerome Simpson could be suspended, leaving a spot open for both of these receivers, but at this point, it is pure speculation.

Rudolph dominates in the first half

Kyle Rudolph proved why many fantasy owners have drafted him to accumulate points for their fantasy football teams. Rudolph hauled in four catches, for 89 yards, and a touchdown. Rudolph scored on a corner post from Matt Cassel at the midway point of the first half and never looked back. Kyle continued to corral difficult catches over the top of the defense and was utilized as a focal point of the Vikings offense. Rudolph seems to be developing a connection with Matt Cassel and it appears to be paying off early in the preseason action.

The Vikings second-tier grouping of offensive lineman struggled in the first preseason game, but bounced back in tonight’s action. The offensive line allowed six sacks in last week’s game versus Oakland, but surrendered just one in tonight’s action. The first group provided adequate time to throw the ball and Cassel was pressured just once on a blown pass protection by offensive tackle Matt Kalil. This was a big accomplishment for this group, especially against the formidable pass rush the Cardinals provided. I will need to take a look at the tape, but it appeared the second and third offensive line groupings protected much better tonight. Teddy Bridgewater had more time to make decisions and seemed more comfortable in the pocket. Of course the pocket collapsed on several occasions, but Teddy was able to find tight end Allen Reisner, rolling to his left on one occasion. It seems as if the Vikings may have developed a better depth chart at the offensive line position following tonight's game.

Mike Zimmer couldn’t have been pleased with the Vikings first defensive series to open the game against the Arizona Cardinals. The Vikings defensed allowed the Cardinals offense to march 93 yards, during a nine-play drive to start the game. Xavier Rhodes missed a tackle and allowed Arizona wide receiver Jaron Brown to gain 51-yards on an out pattern towards the sidelines. The Minnesota defense also allowed a 19-play, 80-yard touchdown drive, which kicked off the second half of action. Zimmer will likely take a look at the tape and won’t be very pleased with what the defense accomplished at points of tonight’s game.

Floyd wreaks havoc in the interior

Sharrif Floyd translated his solid play on the training camp practice fields, to the game tonight against the Arizona Cardinals. Floyd was consistently applying a great push up the interior, which in turn provided opportunities for players like Everson Griffen and Brian Robison to be more effective rushing off the edge. Floyd has become more athletic and is able to shed blocks without his partner Linval Joseph beside him. This certainly provides excitement among Vikings fans and is a sign the team could develop a perennial pass rush this season.

Barr credited with a sack

Anthony Barr was credited with his first full sack in tonight’s game and added a forced fumble. He stripped Cardinals quarterback Drew Stanton, but Arizona offensive tackle Max Starks recovered the ball. The Vikings were lining Barr up at defensive end during several packages, while placing Brian Robison in the interior. The coaching staff is certainly searching for creative ways to use Barr’s athletic skill-set.

The Vikings continually shuffled at the middle linebacker position again tonight and Audie Cole and Jasper Brinkley were rotating frequently. Mike Zimmer said after the game, he was hoping to rotate Brinkley and Cole every two series, but it couldn’t happen with the personnel match ups that Arizona was displaying. He went on to say that they would implement this method next week during the preseason game in Kansas City.

Sherels and Cox rise up in the secondary

Cornerback Marcus Sherels can do everything for the Vikings and continually impressed tonight when matched up with physical receivers on the outside. Sherels added several passes defensed and was quickly making tackles in run support and in coverage. He added a beautiful punt return with limited blocking in front him and nearly broke off for a touchdown. Cornerback Derek Cox added another pass defensed and was called for a questionable pass interference call late in the game. Cox turned his body, but the referee appeared to see more physicality than there really was. Nonetheless, Cox continued to show his physicality and ball skills that he put on display in the first preseason game and throughout training camp.

Safety Chris Crocker received the start next to Harrison Smith tonight and was rather nondescript. Kurt Coleman missed a tackle on a run play when he entered the game and Andrew Sendejo was called for a roughing the quarterback penalty during his time in the game. Jamarca Sanford made a couple tackles in run support, but neither of the four players stood out in live action tonight. It will be interesting to watch the film and see which player looks the most comfortable with fundamentals and scheme adjustment at this point.

Kicker Blair Walsh finished 3-for-4 on field goal attempts tonight and missed from 53-yards on his second attempt. Walsh has struggled early in the preseason, missing his second kick thus far. He added a missed extra point following the game-winning touchdown drive and he seemed out of his element in tonight’s game. He was practicing 70-yard field goals before the game, but it appears he may need to be focusing on more realistic field goals moving forward. The Vikings can’t afford inconsistency in the kicking game and this is something that will be addressed in practice this week.

Cornerback Shaun Prater left the game with a mild concussion, Jabari Price exited with a shoulder injury, and Gerald Hodges left the contest with a tweaked ankle. None of these injuries are serious, but all of them will be monitored this week.


The Vikings will begin closed practice sessions at Winter Park this week and will travel to Kansas City for a preseason matchup with the Chiefs next Saturday.
Posted by Daniel House at 1:32 AM