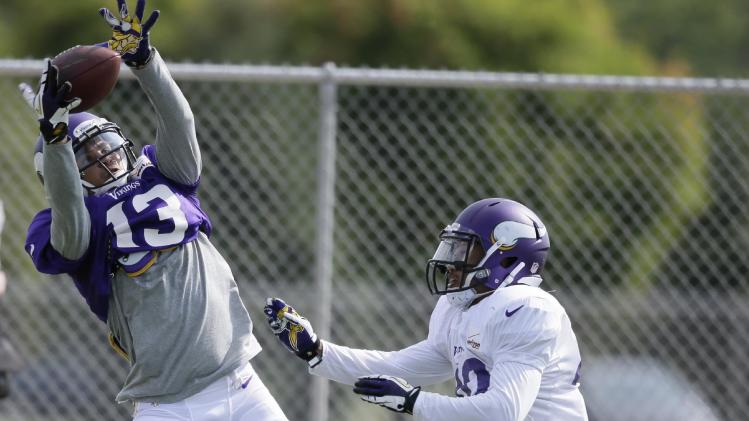 Daniel House caught up with Kain Colter and learned more about his transition to playing full-time wide receiver with the Vikings.


When Vikings wide receiver Kain Colter isn't discussing details about the potential formulation of unions in NCAA, or advocating for a plan to provide fair treatment of college athletes, he's focused on trying to latch onto a roster spot with the Minnesota Vikings. That seems like a daunting task for some, but nothing stops a self-driven wide receiver from reaching his dream of playing professional football.

Kain Colter was a 'jack-of-all trades' for the Northwestern Wildcats and the team heavily relied on his position flexibility during his college career. Colter did it all for the Wildcats, playing quarterback, wide receiver, and running back, all while being an out-spoken voice in the fight to unionize college football. Colter is very excited to have the opportunity to play for the Vikings, but he knows it will take hard work to slide onto the team's roster.

"It's awesome [to be in the NFL]. It's been a dream of mine ever since I've been little. Playing with guys that I've always looked up to is awesome, but I'm a rookie, I have a lot to do, a lot to get better at, and I'm just trying to focus in," Colter said.

It is hard enough making an NFL roster, but switching to a different position throws an extra element into the equation. Colter likes having teammates who are willing to provide him with advice every day on the practice field. Pair that with having the chance to be coached by a top wide receiver coach like George Stewart and Colter realizes how lucky he is to have these types of opportunities in the league. He knows not every wide receiver has this luxury and he is embracing the opportunity with the Vikings.

"Obviously, I'm pretty athletic and I think that helps me out a lot, but I have a lot of things to learn playing the receiver position, but I'm learning from guys like Greg Jennings, Jerome Simpson, Cordarelle Patterson and Jarius [Wright]; they are helping me a lot. Obviously I have one of the best wide receivers coaches in the game in Coach Stewart too," Colter explained.

Kain knows that in order to become more attractive when the coaches trim the roster, he will need to be an asset on special teams too. Colter never worked with the punt team at Northwestern and has no prior experience as a punt returner. He has been working with special teams coordinator Mike Priefer and is becoming more comfortable in that avenue.

"I've never done punt return ever in my life until I got here, but I think I'm getting a lot better at it and feeling more comfortable catching the punts and I think I'll be pretty good," Colter said.

Colter underwent an ankle cartilage surgery in late February and is getting closer to full-speed just six months removed from the procedure.

"Just getting healthy [is the focus]. I had surgery right after the Senior Bowl and for me it's been just trying to get healthy and get my speed back and I'm slowly getting there. I'm about six months out of surgery, so I'm working that way."

Colter has been working diligently to improve his technique as a receiver, but he believes blocking could be one of the most important skills for a wide receiver in the NFL. The capability to run block as a wide receiver becomes even more scrutinized when you have a running back like Adrian Peterson cutting to the edge on runs.

"If I have to pinpoint one [important skill], it is blocking, we have one of the best running backs in the game and I think for me, you have to be physical out there on the edge and especially in the slot blocking these linebackers. You never know when Adrian Peterson might break one and that one block might take him all the way to the house, so you've got to be ready," Colter concluded.