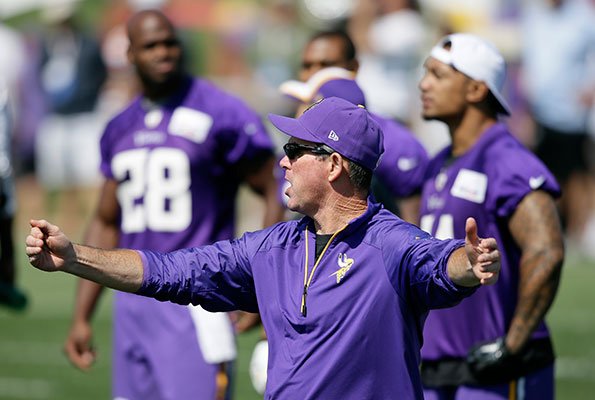 
I spent 10 days covering the Vikings in Mankato, MN for training camp and after watching every practice during that time, I have developed a few key takeaways. These 'takes' are listed below and explain more about the strides the Vikings have made with a new group of coaches entering the fold.

The Vikings haven't had a coach like Mike Zimmer since the days of Bud Grant. Survey a panel of fans who watched the team play back in the 1970s, and they will tell you Mike Zimmer is about as close as you could get to Bud. He hasn't coached a game for the Vikings at this point, but his style directly relates to the former hall-of-fame coach. Zimmer is preaching a disciplined approach, which will heavily promote executing the fundamentals of football. He will inform the players about what they need to improve upon and doesn't 'sugarcoat' the mistake. The focus level and the intensity to win football games is at a level that fans have never witnessed before. After a rough day of offsides penalties, Zimmer decided to penalize the entire 90-man roster by forcing them to perform push-ups on the field. He is trying to provide more discipline for this team, in effort to see these traits translate onto the field in live action. One thing is certain, Mike Zimmer isn't going to stand for anything other than perfection and he will expect every player to play at their highest potential.

The offense will score points

The Vikings have more young talent and explosiveness on the offensive side of the ball than they have in recent seasons. With the best running back in the league, a 'flashy' wide receiver who is ready to burst onto the scene, and a young Jerick McKinnon ready to be a hybrid weapon, the Vikings offense appears to be poised for success. Pair athletic players with an offensive coordinator like Norv Turner and excellent things are bound to happen. The Vikings have weapons like Kyle Rudolph, Greg Jennings, and Jarius Wright that have never been utilized correctly in an offensive scheme. Norv Turner has provided plenty of offensive sets that will include the athleticism of these players in a variety of ways. The offense will creatively score points and it seems the heavy reliance will be placed on the defense to make the plays necessary to win football games. The Vikings offense will play fast and with insane explosiveness, which will make Sunday football fun to watch in Minnesota again.

The coaching staff's attention to detail

I interviewed over 15 Vikings players during my time on the sidelines and seven of them mentioned how much they enjoyed this coaching staff's attention to detail. At every practice you would see position coaches working with players individually on the sidelines. Footwork and technique were the main points of emphasis and you definitely could see the difference by the end of my time at training camp. The cornerbacks had a difficult day during the second afternoon practice of camp and defensive backs coach Jerry Gray wanted to fix the problem. The next morning, Gray led the Vikings defensive backs onto the field 30 minutes earlier than other players. He ran the defensive backs through several different scenarios, was evaluating their footwork, and was quizzing them about certain situations. This trend continued with all of the coaches on the staff and you can see the difference as the Vikings transition into a new group of leaders. It continues to follow the principles Mike Zimmer is looking to develop: play smart, fundamentally sound, and be physical.

GM Rick Spielman continues to dazzle many in the league with his ability to evaluate talent, while orchestrating trades to land players in the draft. Spielman did another great job with this draft class and added a group of players that are already making a significant impact on the field. Anthony Barr is being used in a variety of ways on defense and first-round steal Teddy Bridgewater appears to be a quarterback that could develop into a franchise player for the future. Scott Crichton was a huge value pick and is destroying the offensive line. He probably would have had ten sacks in practice if the team was going live in every team drill. Jerick McKinnon is an athletic beast and Norv Turner will use him in many different packages on the field this season. He is one of many Vikings rookies who will make an immediate impact this season. David Yankey has been with the second-team, but rotated in with the starters for the first time today. Yankey has great awareness and is a player that will be the starting left guard in the future. Antone Exum is a developmental piece for the future and has shown his physicality early in training camp. He needs work to become more fundamentally sound, but he has the athleticism to be an option down the road. The Vikings struck gold in the seventh round by adding Brandon Watts and Jabari Price. Watts is listed as a second-team linebacker on the official depth chart and he continues to show his insane athletic ability on the field. Price has been mixing in with the first-team as a nickel cornerback and Mike Zimmer has continually praised him for his physicality. With all of this said, the rookie class is solid and many young players will be making an impact early in their careers with the Vikings.

The players bodies are in premier condition

The Vikings placed a heavy emphasis on fitness this off-season and did so by adding an entire new strength and conditioning program. You could see the benefits early in training camp, especially when the players were placed in high-tempo situations on the first day. Matt Asiata lost about 10 pounds and his explosiveness was off the charts. Fred Evans has changed his body, along with Phil Loadholt and many other players who weren't physically 'cut' in the past. The free weight program has allowed the Vikings to lift as a team, while becoming stronger in their upper bodies. Mike Zimmer held a conditioning test on move-in day, which is something the Vikings haven't made as extensive in the past. In order to be successful, the coaching staff is trying to make the roster as athletic as possible. You can definitely see the difference in the strength and conditioning philosophy right now during training camp. No player looks completely out-of-shape or unprepared for the season this year. The focus level on being physically fit, while eating healthy, has already started to pay off for this Vikings team.