Five Things to Watch for in the Preseason Opener 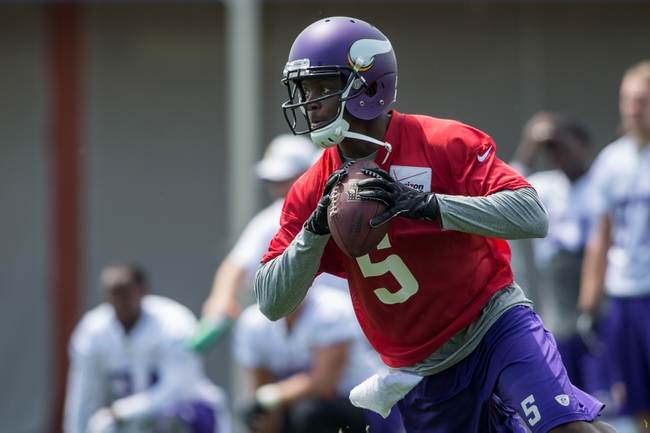 The Vikings open their preseason campaign with the Oakland Raiders at TCF Bank Stadium tonight. Daniel House provides five things to watch for when the game kicks off later this evening.


The Vikings will kick off their preseason campaign tonight against the Oakland Raiders. Preseason games are a time to develop continuity and provides the coaching staff with a chance to evaluate the roster against another team. This year, the preseason will have a brand new meaning with Mike Zimmer joining the Vikings for his first season as head coach. Tonight will be the first game at the Vikings temporary home at TCF Bank Stadium on the campus of the University of Minnesota. The roster will begin to take shape tonight and the preseason provides time to establish continuity before the first regular season game kicks off in St. Louis on September 7th.

Mike Zimmer has stressed that his team will be ready to play outdoors when the wind is howling in December, but it certainly will be an adjustment for this football team. The Vikings will spend their first full-season outdoors since 1981. The University of Minnesota added seating on the open end of the stadium to push the capacity to 52,125. The Gophers sprayed the field purple and allowed the team to spray the logo at midfield. All of this was done in an effort to make the Vikings feel 'at home' for the next two seasons at 'The Bank.' The elements haven't been the team's friend the past three seasons and with a combined record of 2-15-1 during that span, Mike Zimmer will have his work cut out for him to prepare the Vikings for the elements this season.

Vikings fans will be watching their ninth coach in team history make his head coaching debut tonight. Mike Zimmer has waited 20 seasons for the chance be the leader of an NFL team and tonight will be his first night managing the sidelines. Zimmer has spent time working with GM Rick Spielman on how he will handle the in-game situations and Zimmer has been participating in 'quizzes' to prepare himself to handle his duties. Zimmer will be able to rely on Norv Turner to provide him with some advice on how to handle certain game situations and it appears Turner will make a huge impact on how the offense is structured during the games. It will be very interesting to see how he handles the sidelines and manages the time and the responsibilities of being a coach.

The Linebackers will be shuffling

The Vikings haven't had one day at training camp where the same group of linebackers have been with each personnel grouping. Chad Greenway and Anthony Barr will start on the outside with Jasper Brinkley holding down the duties at middle linebacker. Following the starters, it appears the linebackers will significantly rotate, as Mike Zimmer is looking for the right mix of players in certain packages. Brandon Watts, Mike Mauti, Gerald Hodges, and Audie Cole will be all rotating with different groupings in tonight's game with the Raiders. The main focus will be to see which mix will collaborate the best and if any players stand out during their first live contact action of the season.

The Rotation of the Defensive Line

The Vikings defense will be built on getting to the quarterback and in training camp we have witnessed the depth among the defensive line. The Vikings will be rotating players heavily, in an effort to put pressure on the quarterback as much as possible. It will be the first live-action for Linval Joseph in a Vikings uniform. Sharrif Floyd will see his first career start in the interior of the defensive line and it will be interesting to see the playing relationship Floyd and Joseph have developed. Scott Crichton will witness his first action in the NFL and will be rotating heavily throughout the defensive line tonight. Corey Wootton will be pass rushing with the second-team and fans will get their first chance to see him rush off the edge. Look for Tom Johnson to play in the interior with the second-string and keep a watchful eye on his ability to defend the run and rush the passer. The Vikings defensive foundation will be supported by getting to the quarterback and tonight will be the first chance to see the type of talent Mike Zimmer has at this position

Arguably the most exciting element to watch tonight, will be the rookie debut for Vikings quarterback Teddy Bridgewater. Mike Zimmer indicated that Bridgewater will see some first-team reps at some point, so they can evaluate his progress at this point. Teddy will be competing with veteran quarterback Matt Cassel for the starting job. Cassel will start the game tonight and many presume he will see the bulk of the first-team snaps. The Vikings quarterback competition is very tight and it will be decided by whether Cassel or Bridgewater look and feel more comfortable in the preseason. Tonight will be the first opportunity Teddy Bridgewater will have to show the coaching staff whether he is comfortable and ready to play at the NFL level.