Today was easily the hottest day for the Vikings players since they arrived to training camp on July 24th. The heat was piercing off the field and it brought people back to a hot summer day back in 2001, when the Vikings lost offensive tackle Korey Stringer to a heat stroke. Today marked 13 years since 'Big K' passed away and it certainly brought back memories of that day, when the temperature reached nearly 115 degrees with the heat index. Today's practice wasn't near the oppressive heat of that day back in 2001, but it still left many remembering that day 13 years ago. As for today's practice, the Vikings participated in the afternoon session with just shoulder pads and were allowed to wear shorts. The coaches were supposedly impressed with the performance at yesterday's practice and rewarded the players for their handwork today. I compiled all the notes from today's practices and provided you a glance at my notebook.

Installs are aplenty with the Vikings right now

Training camp is the time for a team to learn the playbook and become more familiar with formations that will be presented during the season. In the Vikings case, this is even more important when you have a new coaching staff entering the fold. Norv Turner indicated during his press conference on Wednesday, that the Vikings would be conducting about 10 offensive installs during training camp. I talked with offensive tackle Antonio Richardson today and he indicated the team had installed six or seven sets during training camp at this point.

"We've had 6 or 7 installs so far and it's been very heavy, but that's what's asked of us as pros," Richardson explained.

The Vikings are going to display a highly sophisticated offense this season and if Norv Turner has his way, the team will have an extremely high volume of plays in the gameplan.

The first-team defense remained relatively the same as yesterday's mix, but the shuffling continued during today's practice. Anthony Barr saw all the first-team reps with the base and nickel defenses again today. Chad Greenway didn't see any reps and was given a day off from team contact drills. Tom Johnson was rotating in and seen first-team reps in the middle, along with Isame Faciane. Brandon Watts hopped in for a couple first-team snaps in certain packages, as well. The coaching staff is getting a look at many different combinations and want to be sure to find the correct grouping on the field.

Cox and Munnerlyn impress in coverage

Derek Cox added his second interception in just two days and he continues to display his physicality at the line of scrimmage. He is very active and presses hard at the line of scrimmage, placing receivers in poor positions, which in turn creates opportunities for turnovers. Cox has been seeing second-team reps on the outside and has been since the day he arrived at training camp. He appears to be solid depth for the Vikings at cornerback. As for free-agent signing Captain Munnerlyn, he locked up Erik Lora in a drill with the wide receivers and did the same in 11-on-11 drills against Adam Thielen. Munnerlyn appears to flourish with the physicality the defensive backs have been showing on the field at training camp.

Matt Cassel threw an interception in 11-on-11 team drills today, but that really was one of his only flaws in today's session. He made two overthrows and left two passes short, but he did add a nice pass to Cordarelle Patterson over the top and found Kyle Rudolph in the seam late in practice. Cassel is making most of the throws necessary in the system, but he isn't dazzling by any means. Teddy Bridgewater easily had his worst day at training camp thus far. He overthrew Mike Higgins up the seam and missed Matt Asiata over the middle in the team session. Bridgewater did finish the day 10 for 17, but the seven incompletions were on critical routes. Teddy was intercepted by Derek Cox for the second time in two days. Adam Thielen slipped and fell on the route, but Bridgewater had other open options further down the field. The quarterbacks were just average today, but Teddy took a small step back in the competition today. I'm not saying one day will dictate the competition, but Cassel had the edge at practice today.

Running backs continue to show off their hands

Simpson shows off his hands

Jerome Simpson made a sensational catch on a pass from Teddy Bridgewater that required Simpson to completely adjust his body. He caught the ball at its highest point and landed to the ground gracefully. Simpson later added a difficult leaping catch in traffic during a corner post route thrown by Matt Cassel. No word has come out of camp about Jerome Simpson's potential suspension, but it is almost certain he will serve some time for a DUI he registered at the end of last year.

Scott Crichton continues to flourish next to Sharrif Floyd in the interior of the defensive line. Mike Zimmer has placed Crichton in the middle and he has easily gotten the best push off the line of scrimmage. He should have had two more sacks today and he certainly will be a disruptive force in Mike Zimmer's defensive scheme. Corey Wootton showed off his coverage skills today and blanketed a Todd Higgins pass in the flat. Wootton continues to show his ability to rush the passer, while being remarkably better than I anticipated at dropping back and covering running backs and tight ends. Linval Joseph batted another ball at the line of scrimmage, running the total to four during training camp. He continues to show his athleticism and ability to be a force as a run defender in the middle of the Vikings defense.

The Vikings had Jared Allen as their backup emergency long snapper in the past, but following his exit to Chicago, special teams coordinator Mike Priefer began searching for Allen's replacement immediately. Priefer says he is working with Audie Cole, Tyler Scott and Michael Mauti at backup long snapper.

A.C. Leonard left practice early with a headache Wednesday and missed practice for the second consecutive day because the team is concerned he may have a concussion. We haven't heard any word about the severity of the injury, or what happened, but more information should be available tomorrow when Mike Zimmer addresses the media. 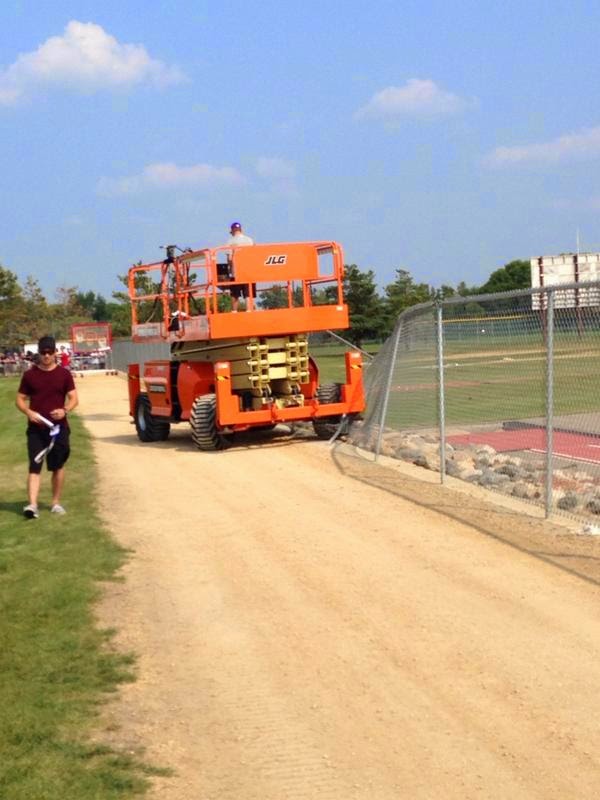 In a shocking event today, a fence was absolutely mangled and destroyed on the edge of the football practice fields of the MSU-Mankato campus. A man driving a scissor lift roared the machine in an attempt to move filming equipment to the adjacent field. As the wheels began to turn on the scissor lift, everything appeared to happen in slow motion for the operator. The Vikings employee who was filming practice, struck the fence and stopped abruptly. As he attempted to alleviate the problem, he drove forward and the fence became stuck under the axel of the scissor lift. The employee looked agitated following the events and threw his hat down to the floor of the machine. Vikings staff attempted to move the scissor lift, but three employees were unsuccessful in their efforts.

The Vikings' injury report includes Andrew Sendejo (back) and Chase Ford (foot). A.C. Leonard missed practice with a headache and no word was available about his status. Robert Blanton (hamstring), and Josh Robinson (hamstring) both sat out of practice today.

The Vikings eighth practice session begins Saturday with a morning walkthrough from 10:30 a.m to 11:30 a.m. The walkthrough will be followed by a night scrimmage, which begins at 7:30 p.m. and concludes at 9:30p.m.
Posted by Daniel House at 9:41 PM