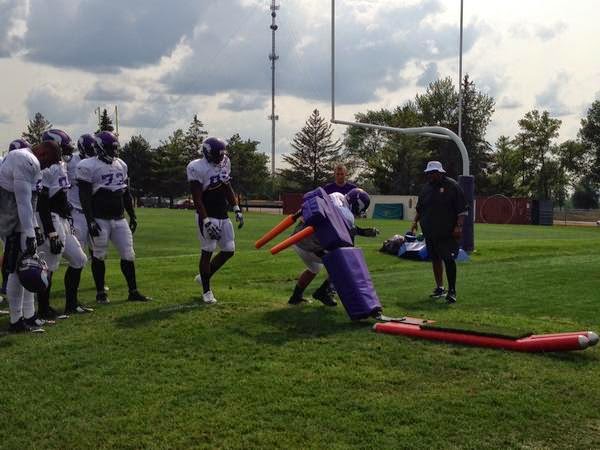 Daniel House opened his notebook for the sixth practice of Vikings training camp and provided his analysis from today's session.

The Vikings defense has struggled during the early stages of training camp, but today was easily the best day for this side of the ball. Marcus Sherels added an interception and a pass deflection, while Xavier Rhodes dropped an interception. The wide receivers had been ahead of the defensive backs during the first four practices, but it seems they may be adjusting to handling the receivers. The press coverage has been implemented for just three practices now and it seems that the defensive backs are more comfortable handling these duties. The coaches were very pleased coming off the field today and were really happy with the intensity and the tenacity the defense displayed on the field today.

Barr sees time with the first-team

Anthony Barr witnessed first-team reps today as the Vikings divided reps during the 11-on-11 session. Barr was on the outside with Chad Greenway, while Jasper Brinkley was holding down the fort in the middle of the defense. Barr joined the rotation for the first time and I talked with him after practice to get his thoughts.

"It's cool [to see first-team reps], at first it might be a little surreal, but you get out there and you realize it is football. I had a great time and I hopefully I continue to improve," said Barr.

Barr was working with the defensive lineman during a portion of individual drills and is looking to be used in versatile ways. One thing is certain, Barr is one athletic specimen and Mike Zimmer has to be excited to work with a skilled defender.

The Vikings were without Robert Blanton, who suffered a hamstring injury during the night practice on Monday. Today, the Vikings rotated plenty of players next to Harrison Smith and appear to be looking of the right combination. Mistral Raymond saw the majority of reps as the starting safety and Jamarca Sanford worked with the second team. The Vikings later rotated Antone Exum and Kurt Coleman into the fold and both seem to be making strides. Exum is becoming more fundamentally sound from a technique standpoint and Coleman is letting his physicality show in practice more. It appears Raymond has the hand on the first-team job, but when Robert Blanton returns, he will resume his duties as a starter.

Shuffling all over the field

As I mentioned, the safety position saw plenty of rotation, but all other position groups on the field saw the same trend. Brandon Watts witnessed time with the first team linebackers, Marcus Sherels saw time on the outside and at nickel cornerback, and Jabari Price continued to see reps at nickel cornerback. The Vikings appear to be easing Captain Munnerlyn back into his role, as he saw reps with the second-team on the outside in defensive drills today. He still hasn't participated in team drills and is strictly limited to individual position drills. The team wants to take a look at all angles and different player rotations, in an effort to find the best defensive mix.

During an 11-on-11 drill in the middle of practice, Teddy Bridgewater was brought in for snaps with the first-team offense. Bridgewater took four snaps and went 2 for 3. His only incompletion came from an Adrian Peterson drop. He completed a beautiful touch pass over the top of the safety to Kyle Rudolph and the crowd began to roar. Teddy only saw first team reps during this session of the 11-on-11 drills and saw second-team snaps for the remainder of practice. As for Matt Cassel, he had his most inconsistent day at Vikings training camp. He was intercepted by Marcus Sherels and cornerback Xavier Rhodes dropped another would-be interception. Cassel struggled to throw the corner post and was under throwing that pass frequently today. He did make some throws necessary in the offense, but he was inconsistent today. Cassel will need to display the ability to consistently make the throws necessary in Norv Turner's offense, if he wants to hold the starting job with the Minnesota Vikings. The next three days will be very pivotal and we will see how he handles the more physical practices that will be in his future.

Offensive coordinator Norv Turner discussed that there would be 10 installs during the three-week span the Vikings are in Mankato for training camp. Today, the trend and install appeared to involve check downs and passes to the running backs. Adrian Peterson dropped one pass, but caught two screens and one check down during today's practice. If Peterson can catch the ball, he has the chance to be very successful, especially when he is matched up one-on-one with defenders. Jerick McKinnon hauled in a beautiful one-handed catch up the sideline and then showed his quick lateral movements up the field. If you want to see a great article about McKinnon's athleticism, read here. As for Matt Asiata, he bobbled and dropped a pass, but he did add two catches off of screen passes. Joe Banyard saw one pass and it came in the flat. Dominique Williams dropped a catchable pass that was slightly under-thrown in a later session.


Interior of the Defensive Line dominates

The Vikings have been yearning for solid play from the interior of the defensive line and today was the first day we witnessed a domination from Sharrif Floyd and Linval Joseph. Floyd was shedding blocks and getting a good push during 11-on-11 drills. He added a batted ball at the line of scrimmage and was providing pressure and giving the defensive ends the opportunity to rush off the edge. Linval Joseph added a push and the interior seemed to be getting a good drive of the ball all day. During one-on-one drills with the offensive lineman, Joseph was dominating center John Sullivan. Sullivan couldn't keep up with his size and athleticism and was pushed back quickly. The interior of the defensive line holds the key to success for this defense. If Sharrif Floyd can provide pressure up the middle with Linval Joseph, the Vikings defensive line could be very difficult to stop.

Robert Blanton watched from the sideline as he sustained a hamstring injury during the night practice on Monday. When asked whether he will be gone long, Blanton responded with a "no" as he left the practice field. Blanton was seeing first-team reps at safety and was having a solid training camp before the injury occurred.

Captain Munnerlyn returned to practice today and was activated off the PUP list this morning. Munnerlyn participated in individual and position drills, but still hasn't worked in a team setting. The coaching staff is easing him back into participation and he should be back soon.

The Vikings' injury report includes Andrew Sendejo (back) and Chase Ford (foot). Mike Zimmer indicated Andrew Sendejo could return as soon as Monday, but his progress will be updated at the end of the week.

The Vikings sixth practice session begins Thursday with a morning walkthrough from 10:30 a.m to 11:30 a.m. The walkthrough will be followed by an afternoon practice (full pads), which begins at 3:00 p.m. and concludes at 5:10 p.m