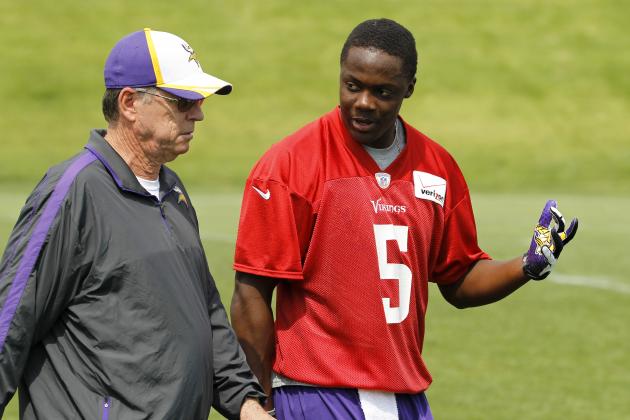 The Vikings coordinators spoke yesterday and provided some interesting comments about philosophies and roster structuring. Daniel House transcribed their thoughts and produced a mini-camp notebook.


The Offense will be 'Modernized'

It has been said a million times leading up to the 2014 season- Norv Turner is an offensive mastermind. Yesterday, Turner made interesting comments involving what he has done with the Minnesota offense. After meeting with the media for the first time in a few weeks, we learned more about some of his plans regarding the Vikings offense.

From the context of this quote, it appears the Vikings are going to use a heavy amount of Adrian Peterson, Cordarrelle Patterson, and the other plethora of weapons, which includes Greg Jennings and Kyle Rudolph. The effort is going to be to use these weapons in a 'modernized' way.

"There's a big part of this offense that is the same and is sound and will always be the same," Turner said Wednesday. "But we try to do some things, look at people that are having success offensively and modernize this offense a little bit, update it a little bit."

Norv Turner has had a reputation of fixing offenses, most recently doing so in Cleveland with the Browns last year. Turner increased the Browns offensive production by 600 yards and 10 touchdowns  last season. Yes, he did this with the Browns cast of characters, which is more reason for optimism that Turner can turn around the Vikings offense.

Vikings defensive coordinator George Edwards talked with the media yesterday and stressed the amount of shuffling that has occurred in Vikings practices thus far. He said no player has a set spot or role in the Vikings defense.

"We moved a lot of guys around this offseason. Guys are playing different positions," Edwards explained following the Vikings walkthrough yesterday.

The competition level is going to be high at training camp and players will need to battle for their lives each and every day. Mike Zimmer has suggested there will be a deep defensive rotation, which makes battling for every last roster spot critical for all players currently on the 90-man roster.

As for the Vikings situation at defensive back, Edwards was noncommittal and said they would be looking for the right mix at that position.

"We are trying to get the best group of guys out there [at defensive back]," Edwards said on Wednesday.

Priefer is focused on football

The investigation into Minnesota Vikings coach Mike Priefer's alleged homophobic comments has been ongoing for months, and the findings from the investigation are expected to be released soon. Meanwhile, Priefer is just going about his job as Minnesota's special teams coordinator and is focused on a team which has seen a wealth of changes this offseason. In his first media appearance since denying former Vikings punter Chris Kluwe's claims, Priefer was asked about his approach with the investigation still ongoing.

As for on the field, Priefer is excited to see what the team can do with some of the additions and subtractions they made this offseason.

"Excited about where this team is headed," Priefer said on Wednesday. "Really excited about the coaching staff we have from the head coach on down. His focus is being team, which has obviously been part of my philosophy my whole career. We've got a great bunch of teachers, including my assistant, Ryan Ficken, who does a phenomenal job for me. It's his second year working with me and he's become very integrated into the special teams, become a very good football coach. I'm excited where we're headed. I'm excited about our new players, our veteran guys that came back, and we're ready to roll."

Priefer also announced that Cordarrelle Patterson would see a more limited role as a kick returner this season. This is all an effort to develop his role on offense and shift his focus to that side of the ball. Priefer went on to add Jerick McKinnon would see backup reps in the return game, as well.

In a phenomenal interview with Tom Pelissero of the USA Today, Adrian Peterson discussed the state of the Vikings as being stable and added some interesting quotes about his future with the team. You can read the interview here.

The Vikings are participating in their final mini-camp practice on Thursday and will conclude team activities until they report to training camp in Mankato, MN on July 24th.